With the upper house elections in Japan fast approaching, the various political parties are putting forward their platforms on key issues such as price hikes, foreign and security policy, and constitutional reform. Japanese academic Shin Kawashima examines the factors that will make a difference in how the votes will go, and whether the Kishida administration will manage to secure victory. 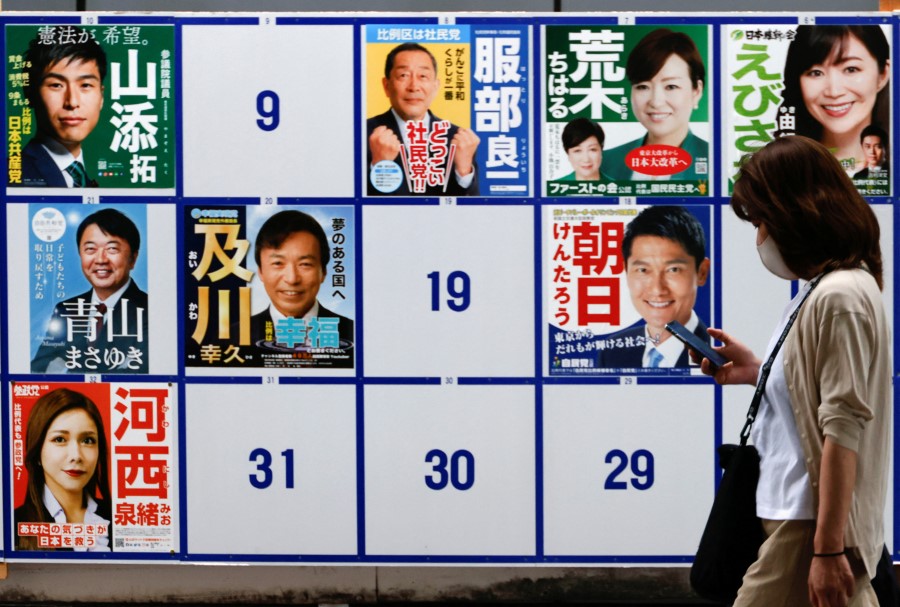 Candice Chan - 25 January 2023
While the Americans have made noticeable progress in their “pivot” to Asia, the crux of successful regional engagement rests on Washington’s ability to work with and around China’s indisputable links and influence in this part of the world, while managing its own relationship with Beijing.
Read more
Translated by Candice Chan on 4 July 2022

This year, 75 seats from single-seat constituencies, 50 seats from proportional representation and one seat to fill a vacancy are up for election. In Japan, the party that holds the majority in the lower house (or the ruling party) selects the prime minister.

For Prime Minister Fumio Kishida's new administration, this will be the second national elections since the formation of his government, and securing a victory here could cement its power...

The upper house of the National Diet is often referred to as the “House of Common Sense”. But the upper house elections, like that of the lower house, are also an indicator of support for the current administration, and sometimes reflect the ups and downs of whichever administration is in power.

For Prime Minister Fumio Kishida's new administration, this will be the second national elections since the formation of his government, and securing a victory here could cement its power as a long-term administration. Well aware of this, the Kishida administration has kept these elections in view from the start and pursued policies to avoid any negative impact on them.

Key election issues include countermeasures for price hikes, Japan's foreign and security policy, and constitutional reform. It is the latter two that are likely to be of international interest. The Liberal Democratic Party (LDP) advocates increased defence spending, with expenditures of at least 2% of GDP in mind. The Japan Innovation Party shares this goal. Komeito, which is the LDP's ruling coalition partner, advocates the development and strengthening of Japan’s defensive capabilities on the premise of an exclusively defensive posture.

Meanwhile the Constitutional Democratic Party of Japan (CDPJ) believes in qualitative improvements to defensive capabilities but does not advocate monetary increases. The Japanese Communist Party (JCP) and Social Democratic Party of Japan (SDPJ), among other parties, oppose an increase in defence spending, but there is a consensus on the need to improve Japan’s defence capabilities.

... even though foreign and security policy as well as constitutional reform are key issues, there is broad consensus across parties on these topics and the contentions that remain are how and when to implement them.

As such, even though foreign and security policy as well as constitutional reform are key issues, there is broad consensus across parties on these topics and the contentions that remain are how and when to implement them. This does not mean that there are no points of disagreement, however, there does not seem to be a clear conflict about specific methodologies in this election. Since a majority of the political parties are largely in favour of strengthening Japan’s defensive capabilities, Japan is nearly certain to head in that direction.

Seeking a mandate for the Kishida administration

To maintain its majority together with Komeito, the LDP aims to win at least 56 seats. It is almost certain to do so. At greater issue is not the question of victory itself but the exact margin by which the LDP or the ruling coalition including Komeito will prevail. Rather than the policies of the administration after the election, this will reflect whether the Kishida administration will be seen as a long-term administration or not.

If the Kishida administration does manage to secure victory in the upper house elections and earn a mandate from the general public, what policies will it pursue? In addition to the key issues highlighted above, there is also a host of issues that have been put on hold because of the election, such as the question of restarting nuclear power plants and the pending issue of improving ties with South Korea, China and other countries. In that sense, these elections are a vote of confidence for the Kishida administration, and only when the administration receives that mandate from the people can it begin to implement its own policies.

Related: Can Japan rise above factional politics and become the 'bridge to the world' under new PM Kishida? | It's hard to be neighbours: When will Japan advance its diplomacy with China and South Korea? | Why Japan and China have totally different ideas of their foreign ministers' meeting | How Japan's political stance is becoming increasingly hawkish and conservative | No concrete vision for future Japan-China relations despite telephone talks between Xi Jinping and Fumio Kishida