While the rest of the world has moved on from strict Covid measures, China is continuing its dynamic zero-Covid policy and local governments are sticking to what they know best — lockdowns. But this mode of control is looking increasingly untenable on the back of increasing protests. Zaobao correspondent Yu Zeyuan looks at how the CCP can respond. 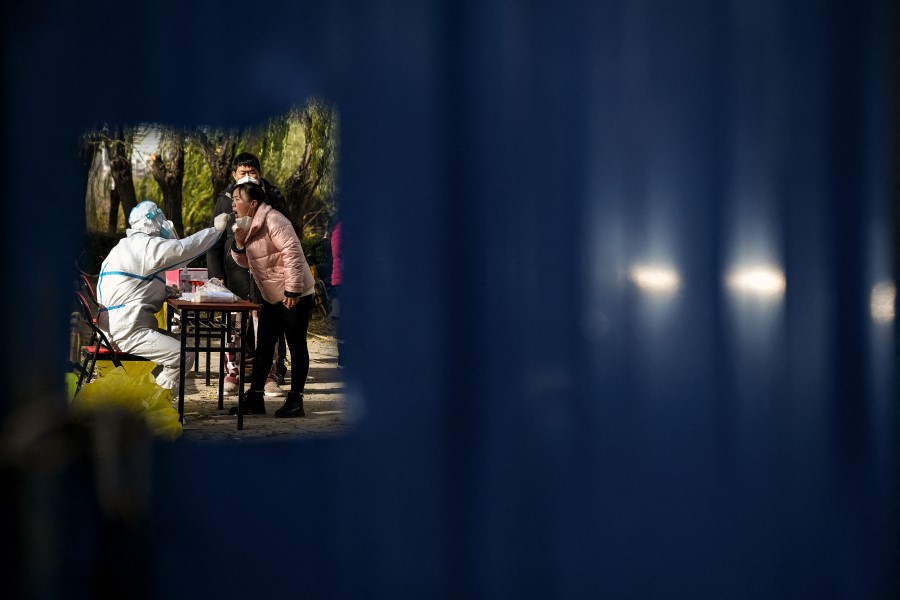 A health worker takes a swab sample from a woman at a residential area under lockdown due to Covid-19 coronavirus restrictions in Beijing on 25 November 2022. (Noel Celis/AFP)

The fire in Xinjiang’s Urumqi that killed ten people has sparked another avalanche of public debate. While the authorities have clarified that the cause of the fire and the resulting casualties were not directly linked to Covid controls, public opinion is still pointing at the lockdown in Urumqi, which has lasted for over three months.

What is it like to be stuck at home for 100 days? Many in Urumqi no longer have the energy to complain. It is hard enough to stay at home for ten days, much less 100. In major cities like Beijing, Guangzhou and Shanghai, many residents are starting to say no to lockdowns for the slightest reason.

Videos of residents protesting the lockdowns have been spreading on social media. One shows people gathering at the entrance of a residential compound in Beijing, and the residents’ committee getting the police to maintain order. One policeman asks the residents’ committee staff whether they have documents to shut the entrance of the compound, and the staff member only says it is a verbal instruction from those in charge. The policeman says: “So it’s a verbal instruction. What’s the basis for not letting people out?”

Cycle of lockdowns hard to break

...lockdowns and semi-lockdowns have gradually lost popular support and strict measures will intensify the opposition between the government and people, or even trigger mass incidents...

However, local authorities also have their own difficulties. The priority of the 20 measures is making sure there are no large-scale outbreaks, but if the measures are strictly followed, there is no way to control the spread of the virus. Following the announcement of the 20 measures, there was a rapid rebound in cases in Beijing, Shijiazhuang and elsewhere, which was enough to make the local governments nervous. After all, under the larger dynamic zero-Covid policy, outbreaks going out of control is a major error for which local officials can be held accountable. Naturally, they dare not slacken and can only go back to the old measures of lockdowns and semi-lockdowns.

This has led to an irreconcilable contradiction: lockdowns and semi-lockdowns have gradually lost popular support and strict measures will intensify the opposition between the government and people, or even trigger mass incidents; meanwhile without strict lockdowns, the outbreaks will go out of control again and the local officials cannot afford to take the blame, and so they grit their teeth and continue with lockdowns.

What worked then may not work now

When the outbreak first began in Wuhan in early 2020, the authorities put the city under lockdown and transferred medical resources there. There was a nationwide wave of support for Wuhan, and the outbreak was quelled in the city and elsewhere. But fast forward to 2022, and the socioeconomic impact of Wuhan-style lockdowns is no longer tolerable. The lockdowns in Shanghai and other locations in the first half of this year dragged down China’s economy, and the people are much less willing to cooperate.

Looking at the happy scenes of a return to normality with the World Cup and comparing it to their own situation of not being able to leave their homes, it is easy to imagine the suppressed emotions of Chinese viewers.

The strict measures in the first two years of the pandemic worked because of the authorities’ strong ground network, and the characteristics of the virus.

The ground network worked thanks to the people’s cooperation and effective grassroots operations, as well as the government’s financial strength and the people’s savings. At the same time, the Delta variant was strong and the public was afraid and willing to sacrifice productivity and freedom to cooperate with the authorities' strict controls.

But now, the Omicron variant is less damaging and death rates are lowered; however, it spreads more quickly and controlling it is much more difficult. Most countries have dropped control measures with no major issues. With the current World Cup in Qatar, tens of thousands of people are gathering and cheering in stadiums with no sign of the impact of the pandemic. Looking at the happy scenes of a return to normality with the World Cup and comparing it to their own situation of not being able to leave their homes, it is easy to imagine the suppressed emotions of Chinese viewers.

Many healthcare workers are engaged in frontline controls, with normal healthcare disrupted and many people unable to get prompt treatment or unable to get to the hospital due to lockdowns...

Livelihoods and mental health at stake

More importantly, nearly three years of strict controls are having a growing impact on the economy and people’s incomes. Many in the service sector as well as the self-employed cannot work every so often and can only eat into their savings, putting them in a plight so that their resentment is growing. At the same time, the financial means of local governments are much weakened with more expenses than income. For some areas, even salaries are an issue; grassroots cadres are exhausted and full of complaints. If this continues, the consequences are unimaginable.

At the same time, the severe impact of long-term lockdowns on healthcare, education and mental health is a major issue. Many healthcare workers are engaged in frontline controls, with normal healthcare disrupted and many people unable to get prompt treatment or unable to get to the hospital due to lockdowns — the loss of health and life might be even greater than the spread of Covid. Most primary and secondary school students can only attend online lessons while cooped up at home, which is not good for their learning and growth.

The strict lockdowns have also severely dented people’s hopes for the future, leading to low spending and investments, in turn resulting in weak economic growth. People were once hopeful about the 20 measures, but public sentiment is now back in the doldrums.

Even with the additional layers of controls in each locality, Covid is still spreading rapidly, while the people’s resistance to strict controls is growing, which shows that strict controls like lockdowns or semi-lockdowns have run their course. The space for authorities to balance strict lockdowns and gradual opening up is rapidly narrowing. If this conflict and chaos are not resolved quickly, the people’s hopes for the future and trust in the authorities will be lost.

Looking at mainstream state media like People’s Daily as well as statements from officials in Beijing and Shanghai, the authorities still hope to snuff out this current wave by strengthening controls, which is easy to understand — the strict controls in the first two years of the pandemic did work.

But popular support for strict controls has been shaken. The Covid control policy is now a difficult but thankless job, or even a wasted effort, which is an important change that the authorities did not encounter in the first two years of efforts. Sticking to the facts and moving with the times has been the Chinese Communist Party (CCP)’s top weapon in its proud achievements since reform and opening up. Now is the time to bring it out again.

This article was first published in Lianhe Zaobao as "严厉封控已用到尽头".

Related: The Great Lockdown: How to ensure a speedy recovery? | Japanese researcher: China's zero-Covid policy and prospects for the Chinese economy | Stability above all else: Beijing's control measures could stay for rest of year | Post-lockdown Shanghai is as tense as ever