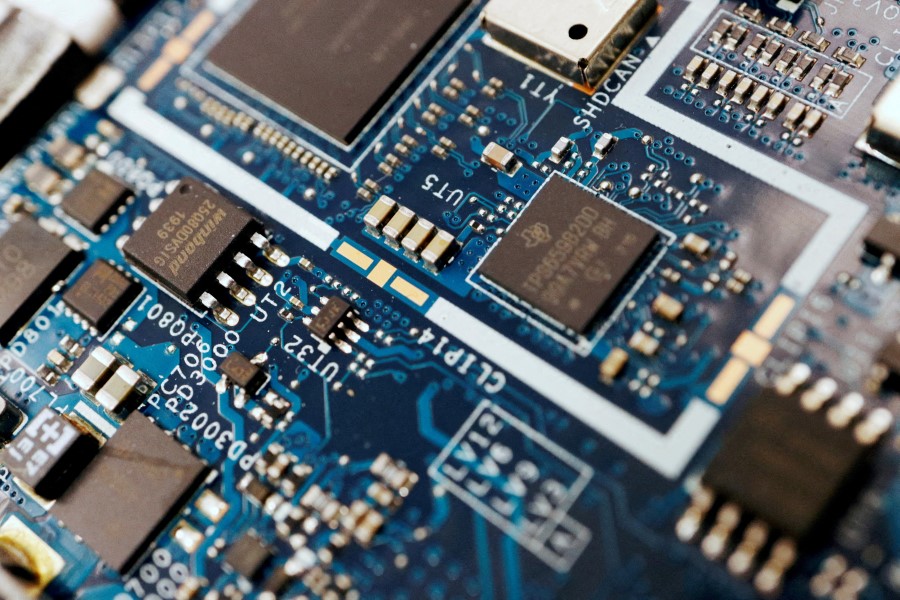 Semiconductor chips are seen on a circuit board of a computer in this illustration picture taken 25 February 2022. (Florence Lo/Reuters)

Candice Chan - 30 January 2023
A mall in Shenzhen came under fire for putting up white lanterns with black text as part of its Chinese New Year decorations, while an “ugly” rabbit-shaped light decoration was removed from another mall in Chongqing. Academic Zhang Tiankan muses on tradition and innovation, and the evolution of traditional decorations.
Read more
Translated by Candice Chan on 16 January 2023

The semiconductor industry is one of the most important industries in the world and impacts every aspect of our daily lives, as chips are found in mobile phones and home appliances as well as in automobiles and aircraft.

In recent years, the semiconductor industry has become a battlefield for technological superpowers, especially between the US and China. Since 2018, the US has gradually increased restrictions on China’s high-tech industries including semiconductors, 5G and artificial intelligence (AI), by announcing and repeatedly updating its Chinese Military-Industrial Complex Companies (CMIC) List as well as setting up the “Chip 4” Alliance to counter China.

Slew of restrictions against China

On 9 August 2022, US President Joe Biden signed the CHIPS and Science Act, which prohibits companies that receive US federal funding from building factories for advanced technology in China for ten years. On 7 October 2022, the Bureau of Industry and Security of the US Department of Commerce amended its Export Administration Regulation (EAR) to ban the sale of advanced chips and related technologies to China, and restrict the ability of US persons (including US citizens, Green Card holders or entities established under US laws) to support the development or production of integrated circuits in China without a US licence.

Notably, these control measures introduced since 2018 have spanned the two US administrations of Trump and Biden, thus signifying bipartisan consensus on these restrictions.

Substitutes for such equipment will be difficult to find in the short term, which will greatly affect the production and research and development (R&D) of China semiconductor enterprises and may cause them to halt production and forfeit the market altogether.

The measures, especially the expanded EAR scope in October 2022, have a great impact on China’s semiconductor industry. The new rules of the EAR are unprecedented, restricting entire processes of all aspects of the semiconductor supply chain, related technological equipment and professionals. Its main impacts on China are as follows.

First, the new rules place thresholds on logic chips with non-planar transistor architectures of 16 nanometre (nm), 14nm or less, NAND flash memory chips with 128 layers or more, and DRAM memory chips of 18nm half-pitch or less. As a direct result, related Chinese enterprises, such as Yangtze Memory Technology Corp, ChangXin Memory Technologies and Semiconductor Manufacturing International Corporation can no longer import semiconductor manufacturing equipment (SME) that are restricted by the US. Substitutes for such equipment will be difficult to find in the short term, which will greatly affect the production and research and development (R&D) of China semiconductor enterprises and may cause them to halt production and forfeit the market altogether.

Second, the new rules add certain advanced and high-performance computing chips and computer commodities that contain such chips to the Commerce Control List, including advanced AI chips used in the civilian sectors and high-performance CPU or GPU chips required by supercomputers. This prevents China from importing high-performance AI chips, which will directly hinder its development of AI technologies and the Internet industry. The impact on supercomputing R&D in China is significant as well, and supercomputers are often critical in domains such as bioengineering and aerospace.

Third, the ability of China’s fabless chip makers in seeking overseas foundries to carry out the tape-out (the final phase of the design process before the chips are sent for manufacturing) of high-performance chips in the current supply chain will be severely restricted. The restriction will apply as long as the upstream technology involves US technology or the manufacturing equipment involves US components. Hence, even if China chip enterprises can design high-performance chips, they are unable to complete the tape-out, let alone mass production.

The EAR’s restriction on the work of American employees will severely impair the talent pool and technological development of the semiconductor industry in China, severely obstructing development and production.

Fourth, the founders of some leading China semiconductor manufacturing equipment and materials enterprises are Chinese Americans, and many senior executives and professionals hold US passports or Green Cards. The EAR’s restriction on the work of American employees will severely impair the talent pool and technological development of the semiconductor industry in China, severely obstructing development and production.

Fifth, the EAR’s new rule has also added the new requirements of a US licence for China’s development and production of SME and related projects. US suppliers must obtain an export licence from the US Department of Commerce to export US technologies and components needed by China’s semiconductor equipment manufacturers for R&D and manufacturing. This will greatly hinder the R&D and production of SME in China.

These control policies are a double-edged sword, which not only devastate China’s semiconductor industry but also severely impact the semiconductor industries of the US itself and other countries. China is the largest market for chips, accounting for a third of global sales. Restricting the sales of high-end chips to China will drastically affect the income of leading US chip enterprises such as Intel, AMD and Nvidia, along with their new R&D in the long run.

China makes up about 30% of sales for leading US SME manufacturers such as Applied Materials, Lam Research and KLA.

Many SME manufacturers will also be affected, as China is an important market for their sales of these equipment. For example, China makes up about 30% of sales for leading US SME manufacturers such as Applied Materials, Lam Research and KLA. In addition, according to the Q1 2022 financial results of ASML, the leading Dutch company in photolithography, sales to China account for 34%.

Pivot to regionalisation and competition

As a result of these series of measures such as the CMIC List, the CHIPS and Science Act and the revised EAR, political considerations have outweighed market, efficiency and cost as the rationale for the expansion and development of global semiconductor enterprises. This spells a change to conventional market competition in the semiconductor industry.

In the new competitive paradigm, various countries have put forward their respective semiconductor strategies, such as South Korea’s K-Semiconductor Belt Strategy in May 2021, Japan’s Strategy For Semiconductors And The Digital Industry in June 2021, and the EU’s European Chips Act in November 2022.

Morris Chang, founder of the global foundry giant TSMC, said at a “tool-in” ceremony, a symbolic installation of the first batch of equipment, at TSMC’s new plant in Arizona on 6 December 2022, that geopolitics has drastically changed the chip manufacturers’ ecosystem.

However, the semiconductor industry is highly complex and a truly global ecosystem. According to Accenture, an average of 25 countries directly participate in every major step in the semiconductor value chain and 23 countries provide market support. Furthermore, semiconductor products traverse various countries over 70 times before reaching the end users.

In the intensely competitive China-US geopolitics, the demise of globalisation of the semiconductor industry hinges to a large extent on semiconductor players beyond China and the US, such as Europe, Japan and South Korea.

While the prospect is not optimistic with the current delicate relations among various countries, the hope for globalisation is not entirely diminished. After all, globalisation remains the best option for global resource optimisation and long-term geopolitical stability.

Related: Chinese tech companies in chipmaking race to be self-reliant | US sanctions forcing Chinese firms to switch to made-in-China tech | Has the US crushed China’s hopes for self-sufficiency in the chip industry? | Why TSMC will stay rooted in Taiwan despite pressure to set up overseas chip factories 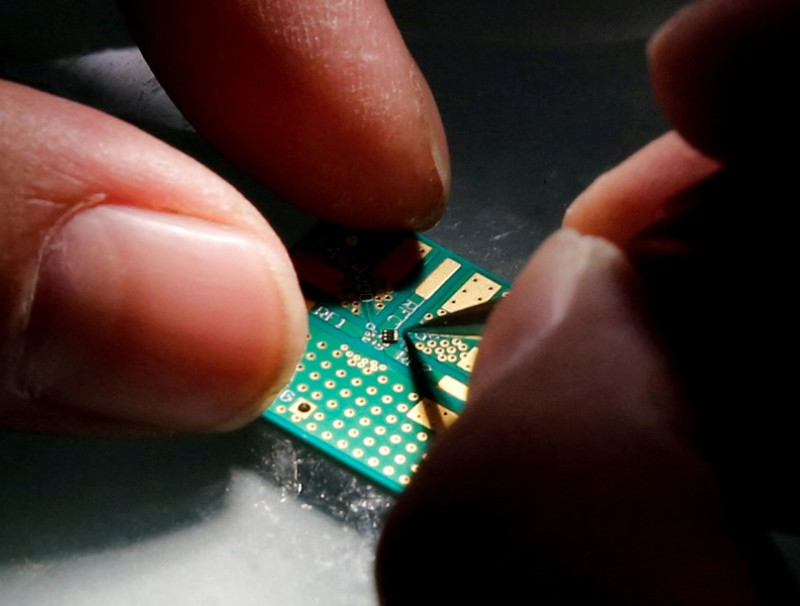 Technology
Can China's semiconductor industry survive under sanctions and the Chip 4 alliance?