Indonesian academic Evan A. Laksmana notes that China has subjected Indonesia to maritime grey zone tactics in the South China Sea, attempting to change the strategic equation at sea and beyond without provoking a direct conflict. While Chinese incursions into the North Natuna Sea in Indonesia’s exclusive economic zone (EEZ) have increased, Indonesia has kept mum and appears unprepared to counter these actions. Laksmana examines the reasons behind Indonesian policymakers' reserved response. 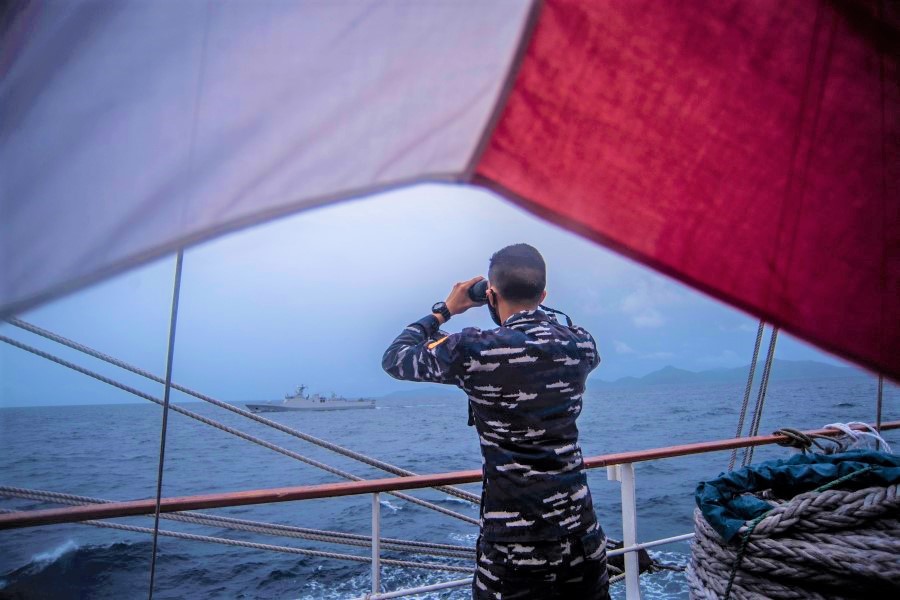 An Indonesian Naval cadets uses binoculars as he monitors the signal from the KRI Diponegoro-365 during a joint excercise on guarding Indonesia's borders, in the North Natuna sea, Riau islands, Indonesia, 1 October 2021. (Antara Foto/Muhammad Adimaja/via Reuters)

Candice Chan - 10 August 2022
Li Cheng, director of the John L. Thornton China Center of the Brookings Institution, notes that China’s emergence as an economic powerhouse has been accompanied by the rise to prominence of seasoned financial technocrats or self-taught experts. While these "new kids on the block" will most likely enter the new CCP Central Committee this fall for the first time, time will tell how they will respond to the many daunting economic and financial challenges at both the provincial and national levels.
Read more
Translated by Candice Chan on 8 December 2021

In the disputed South China Sea, Indonesia is not as strategically unique as its policymakers believe. While Indonesia is not a claimant state in the dispute, China has been treating Jakarta much like its neighbours with claims in the area. Beijing has applied grey zone tactics to gradually change the strategic equation at sea and beyond without provoking an outright violent war.

This is most visible in the North Natuna Sea — Indonesia’s exclusive economic zone (EEZ) closest to the South China Sea — where China has been mobilising its fishing vessels accompanied by its coast guard and maritime militia in recent years. The most public incidents in the area with Indonesian authorities occurred between December 2019 to January 2020, in which nearly 60 vessels crossed into Indonesia’s EEZ.

Conversations with maritime law enforcement officials, however, suggest that China’s incursions have never truly stopped; they have only become less publicised. Some even argue that these incursions are "almost seasonal" every several months or so. But recently, China has upped the ante beyond illegal, unreported and unregulated (IUU) fishing activities.

A Chinese survey vessel spent seven weeks from August to October 2021 conducting intensive seabed mapping inside Indonesia’s EEZ south of the Harbour Energy Tuna Block concession. Jakarta has kept relatively mum, even though up to nine Indonesian Navy and Coast Guard (BAKAMLA) patrol craft were standing by and observing with apparent orders not to intervene. A recent report suggests that China has effectively crossed Indonesia’s "red line" by actually demanding Indonesia stop its drilling activities in the area.

That Indonesia has not pushed back publicly and strategically has emboldened China’s salami-slicing tactics in the North Natuna Sea, from IUU fishing to challenging Indonesia’s hydrocarbon rights.

It should be clear by now that Indonesia has been subjected to China’s maritime grey zone tactics not so different from Vietnam, Malaysia or the Philippines. But Indonesian policymakers insist that the country is not in the same boat as these South China Sea claimants. After all, Jakarta does not stake a claim in the disputes. It has a strong bilateral relationship with China, and a justified position under international law, which allows for private yet stern protests with Beijing.

But China believes it has "overlapping maritime rights" with Indonesia as per its interpretation of the "informal understanding" agreed to in the 1990s. China’s behaviour is also less about "legal disputes" per se, and more about a gradual strategic push to get Jakarta to inadvertently or implicitly acknowledge China’s rights by, for example, entering into bilateral talks about maritime rights. That Indonesia has not pushed back publicly and strategically has emboldened China’s salami-slicing tactics in the North Natuna Sea, from IUU fishing to challenging Indonesia’s hydrocarbon rights.

For the time being, Indonesia is unprepared to counter China’s maritime grey zone strategy.

First, Indonesian policymakers still believe the incursions constitute a short-term, operational law enforcement problem limited to IUU fishing, rather than a wider strategic gambit by China to secure the South China Sea. As such, there is no broader intent to integrate a broader range of instruments — diplomatic, military, economic, political — to counter China’s grey zone strategy.

Even within the limited battle, Indonesia’s maritime security actors — the Navy, BAKAMLA, and the fisheries ministry — remain woefully under-prepared and under-resourced to safeguard and patrol Indonesia’s vast EEZ effectively. The absence of a joint operational maritime command or a national security council to integrate strategic maritime security policies further exacerbates this fractured system.

Second, Indonesia continues to believe its existing policy responses to China’s incursions are sufficient. These include the "strong performance" of military asset deployments along with the occasional presidential visits, the deployment of large fishing vessels from Java to the Natunas, and the boosting of coastal economic projects and development. These are in addition to the regular diplomatic protest notes and notes verbale submitted by the foreign ministry.

But these actions have not changed Beijing’s calculus or behaviour in the North Natuna Sea. They were designed to defuse existing crises, rather than prevent one from recurring. These policies were appealing to a domestic audience easily swayed by hollow displays of "sovereignty assertions". Even though Harbour Energy and its Russian partner have successfully completed their appraisal drilling at the Tuna Block, the fact that China was willing to escalate its challenge over Indonesia’s EEZ rights is further proof that existing policies are simply not working or woefully inadequate.

Indonesian elites are also increasingly dependent on, and vulnerable to, private benefits and public goods that China has been providing, especially during the pandemic era.

Finally, Indonesia continues to try to "compartmentalise" the problem — separating its bilateral ties with China from the North Natuna Sea issue, the South China Sea disputes, and great power politics. This approach seems reasonable given the complexity of each and that China is the most domestically polarising foreign policy issue today. But the Widodo administration has been particularly vulnerable to domestic attacks over its close economic ties with China.

Indonesian elites are also increasingly dependent on, and vulnerable to, private benefits and public goods that China has been providing, especially during the pandemic era. But the more they worry about public scrutiny over dealings with China, the less transparent strategic policymakers have become. Therein lies the nub of the problem: China’s grey zone strategy is succeeding when there is a lack of transparency. Even more so when policymakers seem unable to provide a range of options beyond "knuckling under quietly" or "going to war over fishes" against China.

The upshot is that Indonesia is in denial of China’s maritime grey zone strategy. Even if it is not, it lacks the capabilities and strategic options to effectively counter it if it wants to. Indonesia needs a broader strategy to deal with China beyond defusing fishing crises.

It needs to find ways to confront and manage China as the country’s toughest strategic challenge, including developing new foreign policy toolkits beyond ASEAN. In the North Natuna Sea, Jakarta should develop new minilateral security arrangements with Vietnam and Malaysia, for example. More broadly, Indonesia could also elevate its nascent trilateral partnership with India and Australia.

Either way, Indonesia needs to overhaul its siloed strategic policymaking system and fractured maritime governance architecture. Policymakers must stop wishing the problems with China will go away quietly.