Is China taking policies to the extreme to achieve zero-Covid?

After a month of tough restrictions following a Delta variant outbreak, China reported this week zero new locally transmitted Covid-19 cases. Since the pandemic started, it has stuck with a zero-Covid strategy. In fact, even contemplating living with the virus is often seen as submitting to the ways of the West. LKYSPP academic Lu Xi asks: As some local officials take zero-Covid policies to extremes to submit good report cards, will ordinary folk suffer the most? 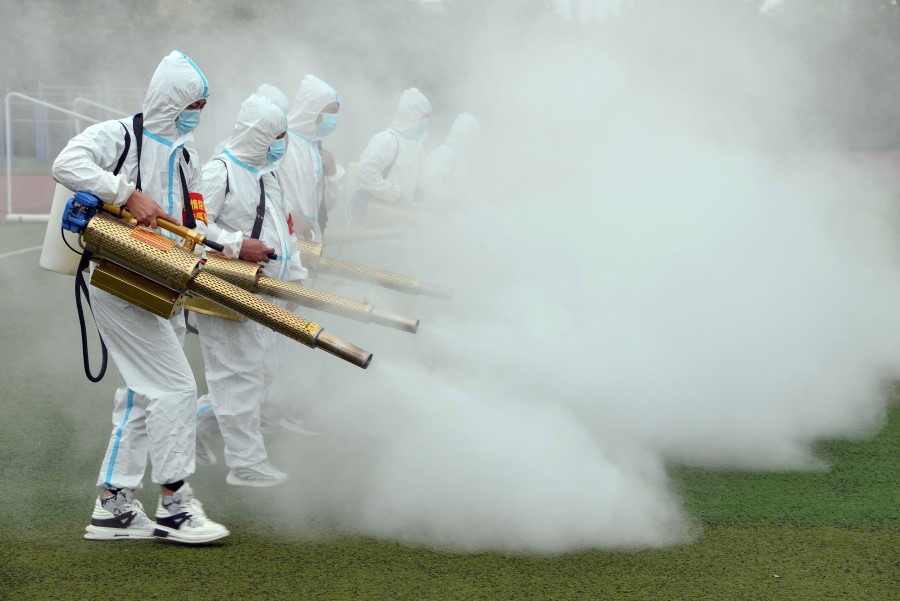 Staff members spray disinfectant at a school ahead of the new semester in Bozhou in China's eastern Anhui province on 23 August 2021. (STR/AFP)

Candice Chan - 30 January 2023
A mall in Shenzhen came under fire for putting up white lanterns with black text as part of its Chinese New Year decorations, while an “ugly” rabbit-shaped light decoration was removed from another mall in Chongqing. Academic Zhang Tiankan muses on tradition and innovation, and the evolution of traditional decorations.
Read more
Translated by Candice Chan on 24 August 2021

As the Covid-19 pandemic rages on and new variants of the novel coronavirus continue to appear, governments around the world are forced to contemplate the possibility of co-existing with the virus. For example, Singapore has charted its path towards the new normal and hopes to be able to manage the coronavirus in a similar manner to handling influenza viruses eventually. Since the start of August, the Singapore government has rolled out new quarantine policies and changed the way it manages those who have been infected. It has also announced the conditional reopening of its borders for international tourism. These measures have been put in place to strike a new balance between keeping the pandemic under control and daily living.

China’s inflexible strategies may give it little wiggle room

China stands in stark contrast to Singapore, in that all levels of the Chinese government seem to be obsessed with achieving a state of zero-Covid in the country, so much so that talk about co-existing with the virus has been subjected to criticism at the political level.

Recently, the renowned Chinese public health expert Zhang Wenhong wrote an article entitled “China Needs to Have the Wherewithal to Coexist with the Coronavirus in the Long Term” (《中国需要有长期与病毒共存的智慧》). This invited a signed rebuttal from the former Chinese health minister, Gao Qiang. More absurdly, a teacher in Jiangxi province was put behind bars for 15 days because he suggested “conducting experiments on co-existing with the coronavirus in Yangzhou” in his online post. The post had only been shared five times.

...the climate of extreme political rigidity in China over the past few years has caused its public policies to become highly inflexible. Without instructions from the higher-ups, subordinates are unable to make adjustments.

For decision makers crafting a pandemic strategy, there is a need to consider both curbing virus transmission and public tolerance of policies. Thus far in the pandemic, leaders in Singapore have been highly flexible. The local government has also switched between different strategies at appropriate junctures to minimise the economic impact of the pandemic. In comparison, the climate of extreme political rigidity in China over the past few years has caused its public policies to become highly inflexible. Without instructions from the higher-ups, subordinates are unable to make adjustments.

Global Times recently published an article written by Zhang Yiwu, a Peking University professor. In his article, Professor Zhang elevated the choice of pandemic strategy to a competition between Chinese and Western political systems. He opined that opting to co-exist with the virus would be taking the British and American systems as a model for China to follow.

The reality is that excessive execution or even misinterpreting public policies have become a common sight at the grassroots level in China’s battle against the pandemic.

There is a phenomenon, however, that cannot be explained by political rigidity or competition between political systems — the high-handed response to the aforementioned teacher's talk of co-existing with the virus did not arise out of directions given by higher-ups. Instead, the decision was made by a provincial-level public security official in Jiangxi to quell comments directed at Yangzhou (in Jiangsu province).

One cannot help but wonder what caused the official, far removed from the centre of power, to react so vehemently to a matter outside his or her area of responsibility.

Taking policies to the extreme to please higher-ups

The reality is that excessive execution or even misinterpreting public policies have become a common sight at the grassroots level in China’s battle against the pandemic. Not recognising Covid-19 test outcomes from other jurisdictions, repeated quarantines and polymerase chain reaction tests, expanding the scope and extending the duration of quarantine at will are all examples that stem from each layer of the Chinese government introducing additional Covid-19 measures. Such behaviour reflects the underlying intrinsic shortcomings of implementing a legalistic Chinese bureaucracy.

China’s societal system has often been described as legalism cloaked in Confucianism, with its bureaucracy as the interface. Outside the bureaucracy, human and societal relations as well as moral etiquette are used to keep its people in check, while a system of rewards and punishment based on the will of its leaders is implemented within the bureaucracy. Understandably, for its bureaucracy to function effectively, those in power must have perfect information about it, otherwise, there would be nothing to base the rewards and punishment system on.

Predictably, subordinates hold back when it comes to conveying information to their superiors, and implementing policies. This forced superiors at all levels to demand more than what is required to hedge against the risks of dishonest behaviour from subordinates. As a result, public policies become more bloated as they move down the chain of command.

Introducing additional measures is not the only way for officials to insure themselves against risk. Superiors can also ask for bribes from their subordinates in times when regulation is slack to cover their losses resulting from information asymmetry using financial gains. But this would erode the authority of those at the apex, causing them to lose control of the bureaucracy.

In peaceful times, leaders are less sensitive about (holding onto) power, so corruption tends to be rampant. However, when they are seeking to consolidate power, introducing additional measures to the policy is the only way out for the various levels of government.

In the face of the Covid-19 pandemic, the Chinese government needs to maintain the rationality of its bureaucracy to prevent the practice of introducing additional measures to public policies at each level of government from becoming the biggest stumbling block to its decision-making.

At the end of the day, the debate between zero-Covid and coexistence with the coronavirus is a public policy discussion. As such, both costs and benefits have to be considered. Since society will bear the costs, what it stands to gain should also be duly considered. Introducing additional measures creates extra burdens that ultimately are borne by the people. Since the matter concerns them, there is no reason to stop them from expressing their views within reasonable limits.

Legalism for officials and Confucianism for the common folks is an equilibrium reached through historical trials and tribulations. Foisting the legalistic system of rewards and punishment on the common folks will destroy secular etiquette and family values that have been forged over time. The last time a similar attempt was made in China in the last century, a painful lesson was the consequence. In the face of the Covid-19 pandemic, the Chinese government needs to maintain the rationality of its bureaucracy to prevent the practice of introducing additional measures to public policies at each level of government from becoming the biggest stumbling block to its decision-making.

Related: Singapore health experts: China the best positioned country to aim for zero-Covid | Why China is determined to achieve 'zero-Covid'