Metaverse: Plans of the tech giants

When it comes to the metaverse, the various tech giants are taking different approaches, from conservative to aggressive. Technology expert Yin Ruizhi takes a look at three major players — Facebook, Nvidia, and Tencent — and their respective strategies, and how they are likely to contribute to building the metaverse. 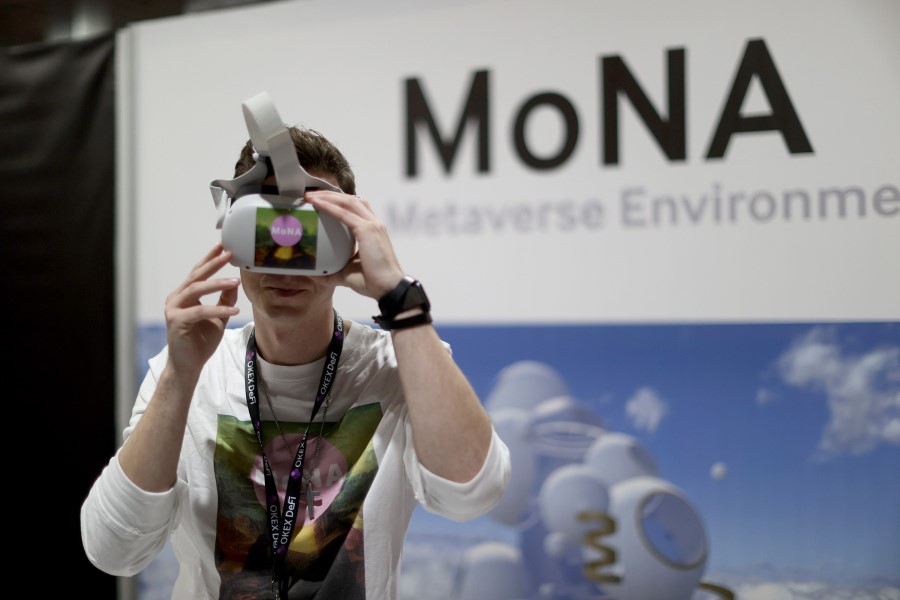 A man wears a VR headset at a booth during the DCentral Miami Conference at the Miami Airport Convention Centre on 1 December 2021 in Miami, Florida. (Joe Raedle/Getty Images/AFP)

Candice Chan - 6 December 2022
Commentator Chen Kuohsiang notes that even after the 20th Party Congress and talks between Chinese and US Presidents Xi Jinping and Joe Biden during the G20 summit, the Chinese economy is not facing an easy time, not least because of Covid-19 controls, the US's trade restrictions and China's stringent policy on private enterprises.
Read more
Translated by Candice Chan on 21 January 2022

When it comes to the current metaverse craze, besides start-ups, major tech giants are also actively setting up for it, and what they are doing gives an insight into their understanding and assessment of the metaverse. In general, the tech giants are taking three main strategies towards the metaverse: all-out aggressive, core technologies preparation, and conservative.

The company making the most high-profile preparations for the metaverse is Facebook, with founder Mark Zuckerberg releasing a video laying out a complete vision, and the new company logo also representing the metaverse.

Facebook is the only one of the tech giants to take an all-out aggressive approach. In July 2014, Facebook purchased Oculus — currently the industry’s best-performing VR tech company — for US$2 billion. In this time, Oculus has released four headsets: Oculus Rift, Gear VR, Oculus Go, and Oculus Quest, in a constant effort to spark off the VR games hardware market.

On 26 October 2021, Facebook said it plans to spend at least US$10 billion over the next few years on Facebook Reality Labs, which focuses on virtual reality technology R&D, including VR/AR, haptic gloves, and motion tracking. In a word, this laboratory is engaging in full R&D into the technicalities of the “Oasis” — the metaverse in Ready Player One.

Facebook’s recent moves all show its bold ambition of bringing Ready Player One to life.

Another tech giant Nvidia has entered the sector of 3D virtual world tools by integrating its own technology. Nvidia’s Omniverse is based on Pixar’s Universal Scene Description animation technology and Nvidia RTX technology. Nvidia is working on creating cinema-quality 3D imagery rendered in real time, physics and material science research, as well as the interactive workflow of its leading 3D modeling softwares. Such features are supported by the superior computing power of Nvidia chips.

Looking at Nvidia’s strategy, it is not so certain whether future hardware for the metaverse is necessarily VR-type equipment. However, one thing is for sure: no matter what hardware the metaverse is dependent on, as long as it is electronic hardware, when building the virtual world of the metaverse, it will be difficult to bypass Nvidia’s Omniverse as a key software. This is Nvidia’s core strategy in its technological preparation.

On 15 April 2021, Tencent and its Platform and Content Group (PCG) released a statement announcing its organisational restructuring and personnel reorganisation. Its long-form video platform Tencent Video and short video service WeSee, as well as its Myapp service, will be merged to form its online video business unit, while the biggest personnel assignment is Yao Xiaoguang, Tencent vice president and president of the Interactive Entertainment Group (IEG) Tianmei Studio Group, taking the reins of the PCG social media platforms. The two main products of PCG’s social media operations are QQ and Qzone, and Yao will now be the new head of QQ.

Yao understands gaming better than anyone in the internet industry, and the game that he created, Honor of Kings, is currently the most successful game in the world. The strategy of putting him in charge of QQ — the biggest social media product among Chinese youths — shows that Tencent is not sure if the hardware for the metaverse is VR equipment as portrayed in Ready Player One; it is not even sure if the metaverse will be achieved with electronic hardware and equipment. And so, the conservative approach of Tencent and other tech giants like it is to meet market expectations of the metaverse, by just pragmatically continuing to work on their social media and gaming operations.

No matter how the metaverse is achieved, it will definitely involve interpersonal exchanges and engaging game content. If Tencent can grasp these two key points, it will be able to reach its goal first despite starting later.

Related: Metaverse: A bubble that could soon burst? | Metaverse: A chance to build a better world | If Chinese video producers and gamers can become metaverse creators | Will overregulation kill Chinese firms' metaverse ambitions? | A metaverse with Chinese characteristics?