A metaverse with Chinese characteristics?

Facebook’s Mark Zuckerberg recently said, “Think of the metaverse as an immersive virtual world where people can spend time together and hang out, much like you can do today with virtual reality, dialed up to 11.” Stocks of companies working on constructing the said metaverse have been on the rise. China, with its huge video game market, should have a head start in this realm, but authorities are sounding words of caution. They fear the metaverse will be as ephemeral as it seems and worse, even harder to regulate. How will it get a piece of the pie in its own way? 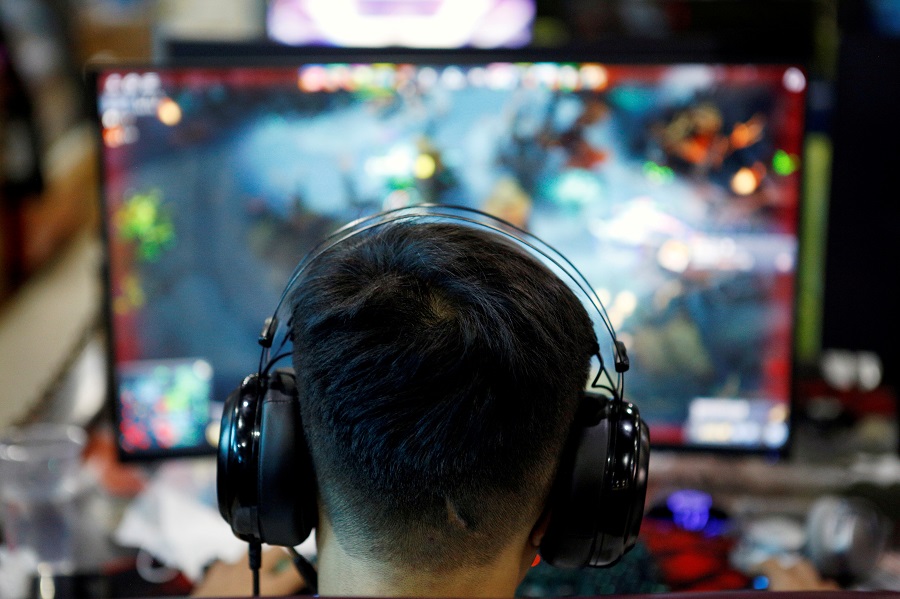 A man plays an online game on a computer at an internet cafe in Beijing, China, 31 August 2021. (Florence Lo/File Photo/Reuters)

Grace Chong - 30 January 2023
Amid ongoing tensions, a high-level visit by US Secretary of State Antony Blinken to China in the coming week shows hope for improved relations between the two economic powerhouses. Zaobao correspondent Yu Zeyuan notes that while the meeting may not produce practical results, it is a much needed exchange to manage and control China-US relations from worsening.
Read more
Translated by Grace Chong on 20 September 2021

First it was education stocks and internet stocks that were trending on the Chinese stock market. Now, it’s the lesser-known “metaverse” stocks.

Over the past weeks, several metaverse concept stocks soared on the stock market. Shenzhen Zhongqingbao Interaction Network reported the most growth after its stock price doubled within a week. When this little-known online gaming company suddenly became the talk of the town, some rushed to jump on the bandwagon, while others asked curiously, “What’s a metaverse?”

The term metaverse is not new. It was first mentioned in science fiction author Neal Stephenson’s 1992 novel, Snow Crash. In the futuristic story, humans can enter virtual worlds and interact with each other as avatars, all by putting on goggles and wearable contraptions and logging on to terminals.

Such a world was depicted again in the 2018 science fiction film Ready Player One. There, humans put on virtual reality (VR) headsets to enter the OASIS immersive universe and participate in various activities.

Facebook founder Mark Zuckerberg thinks that the metaverse is not only a game but the embodiment of what the next phase of the mobile internet will look like, that is, a world where people will have unprecedented experiences in a virtual world.

To welcome such a future, Zuckerberg plans to transform Facebook into a “metaverse company” in the next five years. Late last month, Facebook also launched its brand new VR meeting rooms, where Zuckerberg, who appeared as an avatar, along with other participants, were seen participating in a new immersive meeting experience.

A virtual world that allows people to roam the world from the comfort of one’s home is perhaps what people hope to see in the post-pandemic era.

Apart from Facebook, other tech giants and venture capital companies are also seeking to have a piece of the metaverse pie. Apple acquired VR startup company NextVR, while Microsoft is searching for the “enterprise metaverse”. In March this year, the share price of sandbox gaming company Roblox — hailed as “the first metaverse stock” — soared immediately after it was listed. With the help of the metaverse concept, gaming company Epic Games also received US$1 billion (S$1.34 billion) in funding. Chinese tech giant Tencent is one of the investors of both companies.

In August, the metaverse concept became an even bigger buzzword. ByteDance acquired VR startup company Pico for 9 billion RMB (S$1.88 billion). Japanese social network GREE announced the launch of its metaverse business, while South Korea’s finance ministry plans to set aside US$20 million from next year’s budget to develop a metaverse platform.

It is not an accident that the metaverse has gained widespread popularity. The Covid-19 pandemic has greatly restricted activities in the physical world, resulting in an increased demand for the virtual world. Many concerts, graduation ceremonies and press conferences have been held virtually, accelerating society’s migration to the digital world. A virtual world that allows people to roam the world from the comfort of one’s home is perhaps what people hope to see in the post-pandemic era.

Bloomberg recently estimated “the metaverse’s market size at US$800 billion”. China, as the world’s biggest video game market, has a great first-mover advantage in developing this emerging industry. However, Chinese officials are not as enthusiastic as the capital market about the metaverse.

Putting aside the technology needed to build a virtual world, the development of the metaverse in China is already faced with policy and regulatory barriers..

Firstly, the online gaming industry, which is seen as the foundation of the metaverse, is facing unprecedented regulatory pressure in China. Chinese officials are not only restricting the amount of time that minors can spend on video games, but have also called in Tencent, NetEase, and other online gaming enterprises for a talk on gaming, requesting rectification measures be taken to curb gaming addiction. It was also reported that the Chinese authorities have slowed down approval for new online games.

Putting aside the little amount of energy that online gaming industry players have left to create a metaverse amid numerous restrictions, this entertainment-based virtual world already runs counter to the policy direction of curbing game addiction.

...amid the building and joining of metaverses of various countries, a metaverse with Chinese characteristics will slowly rise and operate in parallel with other virtual worlds.

Regulations would need to be in place

Secondly, there are too many variables to be controlled in a metaverse simultaneously participated in by various parties, such as the rules of the game, the assets to be transferred, the profile of participants and access to activities, the type of content that can be presented and so on. As the metaverse will operate in a decentralised manner, it would inevitably challenge authority. Decision makers who are currently containing the disorderly expansion of capital will not allow enterprises to regain power in the virtual world.

A few years ago when initial coin offerings (ICO) became popular across the globe, the Chinese government came forward quickly to stop ICOs and ban cryptocurrency transactions. But at the same time, China’s central bank developed its own digital currency, which is centrally managed and issued. At present, this digital currency is being piloted in various regions. Stripped of its initial conceptions, retaining the technology behind it, and customising the rules of operation — this was how China’s digital currency found its path to fruition. Perhaps the same will apply to the metaverse.

Currently, the metaverse is still stuck in the stage of conceptual hype. It could turn into a bubble like the ICO, or it could become a new industry with endless potential like artificial intelligence and big data. But a more likely scenario is that amid the building and joining of metaverses of various countries, a metaverse with Chinese characteristics will slowly rise and operate in parallel with other virtual worlds.

Related: Why China is cracking down on big capital | If 4G = short-form videos, 5G = a different reality | China’s cloud war: Tencent and Alibaba up their game as cloud giants eye world markets [Part 2] | Can strict regulations save Chinese youths from gaming addiction? | China’s crackdown on cryptocurrencies: Trade-offs between stability and innovation | Will e-CNY spur the internationalisation of the RMB?