China’s crackdown on cryptocurrencies: Trade-offs between stability and innovation

China’s crackdown on cryptocurrencies has increased the volatility of the market, not least with bitcoin miners fleeing and the price of bitcoin plummeting. What are the reasons behind China’s regulatory clampdowns and will other countries follow suit? 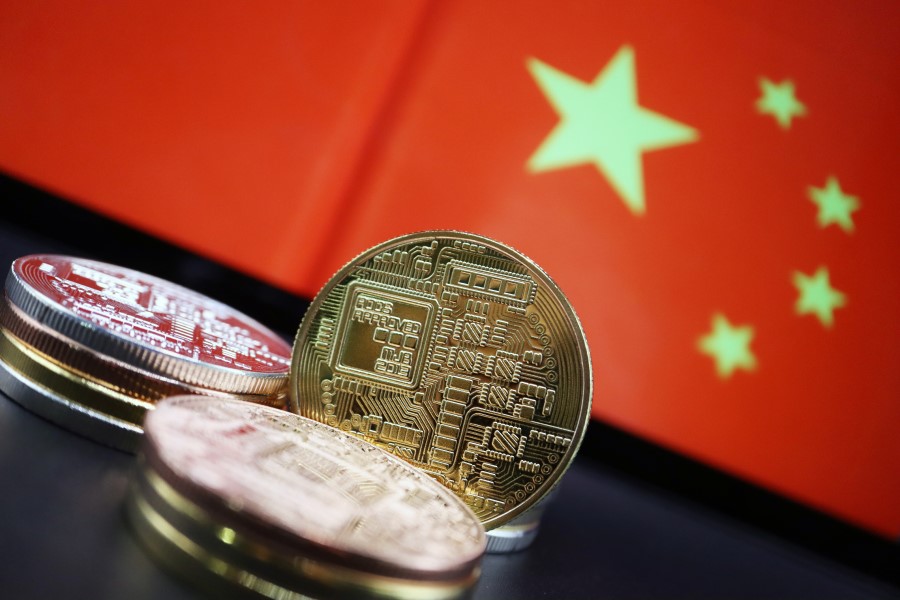 Cryptocurrency representations are seen in front of an image of the Chinese flag in this illustration picture taken 2 June 2021. (Florence Lo/Reuters)

Candice Chan - 28 June 2022
US-based young comic artist Bei Yi reflects on China's gaokao (university entrance exams), which took place in early June. Every year, Chinese students cross this narrow log bridge of national exams, hoping to find a clearing on the other side. Students from regions across China, rich and poor, see this as a possible ticket to a better life and maybe even a passport to the West. When the stakes are so high, studying becomes a moral obligation to one's family. Some make it out, but on that journey, many things are left behind.
Read more
Translated by Candice Chan on 2 August 2021

In June 2021, the Chinese government shocked the world by completely prohibiting the trading of cryptocurrencies following a meeting between the People’s Bank of China (PBOC) and several financial institutions and payment companies. The crackdown decreased the market capitalisation of bitcoin by over US$400 billion.

Bitcoin, a proxy for the entire market’s performance, has rocketed from US$3,725 to over US$40,000 today — more than a 1000% return — despite a 40% drop from its all-time high record of over US$60,000. It is understandable that most investors did not buy it at that low price and realised returns are thus likely much lower than that. Nonetheless, its price pattern has made headlines worldwide and prompted investors to pour money into the ecosystem.

The interest, excitement, mania and extreme volatility seen in cryptocurrencies are by-products of financial innovation. It can be compared to past disruptive innovations such as trains in the 1840s, bicycles in the 1890s, computers in the 1940s, and the internet in the 1990s. But as with the previous technological disruptions, a rapidly rising bull market also attracts bad actors in the form of scams, frauds, and misleading advertising. In certain cases of stablecoins, flawed projects may have attracted so much capital that their failure can cause systemic risk concerns for the broader financial system.

...financial regulations of large economies, or the multilateral coordination of policies from different countries, can still affect and shape the cryptocurrency market in a significant way.

However, given its decentralised nature with no barriers to participation, no single government or financial institution can put a complete stop to this market unilaterally. However, financial regulations of large economies, or the multilateral coordination of policies from different countries, can still affect and shape the cryptocurrency market in a significant way.

For example, India has announced the potential prohibition of cryptocurrencies but has yet to implement them. Meanwhile, Turkey banned the use of cryptocurrency as a means of transaction in April 2021 but did not completely ban the purchase of assets.

Meanwhile, China has taken the lead in implementing policies that explicitly prohibit its citizens and firms from participating in the cryptocurrency market, starting with the crackdown of mining.

A regulatory crackdown with Chinese characteristics

China is unique in both its political willpower and stringency of the crackdown of cryptocurrencies. Therefore, understanding why the Chinese government would take on such a decentralised global network can shed light on future policy and implications for the whole crypto market. We discuss three reasons below:

1. Concern about the instability of the financial system with the rise of fintech service providers and related companies

In recent months, heightened regulations for fintech companies have increased. This trend started from the sudden suspension of the IPO of Ant Group on Shanghai Stock Exchange’s STAR Market (the Shanghai Stock Exchange Science and Technology Innovation Board) after Jack Ma’s criticism of financial regulation. This marked the beginning of tightened liberties for fintech companies, which have implications for cryptocurrency markets.

Payment technology has created huge informational advantages for e-commerce service providers. But the reliance on only a handful of payment systems also poses financial stability concerns, should such an issue arise within the system. China views this as a potential threat to financial stability and social order. So instead, China has issued the digital RMB, a central bank digital currency (CBDC) which incorporates payment rails from existing financial institutions rather than relying simply on payment systems like Alipay and Tencent.

The mining of cryptocurrencies can cause air pollution, health, and climate impact, consuming nearly 70 terawatt hours of power per year. In comparison, the whole of Singapore uses about 52 terawatt hours of power in the year 2019. As of June 2018, more than 80% of bitcoin mining was performed by six mining pools, and five were from China.

2. The nexus of political, economic and legal systems

Chinese economic policies are still largely affected by the central government and socialism ideology. Prior research has shown a trade-off between social stability and economic growth that has often been at play when China gradually liberalises the financial system. The excessive speculations that destabilise the economic/financial system are largely perceived to potentially disrupt social harmony.

For example, even in non-cryptocurrency settings, the legal system and the financial market intervention are frequent policy tools used to reduce excessive volatility, such as halting IPO applications and ban for certain types of trading.

In addition, the adoption of privately-issued cryptocurrencies introduces an existential threat to the functioning of monetary policy. China uses capital controls, which can be circumvented using cryptocurrencies. As such, other countries worldwide with similar monetary policies may adopt similar policies in the future.

3. Environmental issues as a result of cryptocurrency mining

The mining of cryptocurrencies can cause air pollution, health, and climate impact, consuming nearly 70 terawatt hours of power per year. In comparison, the whole of Singapore uses about 52 terawatt hours of power in the year 2019. As of June 2018, more than 80% of bitcoin mining was performed by six mining pools, and five were from China.

The economic cost resulting from mining US$1 worth of bitcoin is estimated to be at US$0.49 in the US and US$0.37 in China. In addition, many of the mining operators have been consuming electricity from non-renewable sources.

It was expected of the government to crack down on such cryptocurrencies miners if China wants to achieve its carbon-neutral goal by 2060. As a step, the Chinese government has recently launched its national carbon market in July 2021.

Will the crackdown be effective?

We believe China’s crackdown on cryptocurrency mining could effectively deter the use of cryptocurrency through the following channels. First, the crackdown announcement led to a 4% fall in bitcoin prices, with other coins falling even more.

The drop indicates the immediate negative market expectation. Second, closing mining pools have a clear and measurable outcome on both the environment and the speed of mining.

Third, it deters Chinese financial institutions from offering such products to clients.

Fourth, it signals the market to expect such future policies and discourages market entries by the potential Chinese miners.

Fifth, it reiterates the government’s ideology of maintaining financial stability domestically in the face of global fintech innovations.

These policies are also likely to mark the start of even more drastic steps to curb the use of cryptocurrency. In doing so, China must balance between fintech adoption and uncontrolled use of fintech which may cause financial instability and potential social unrest.

With China taking the front seat in passing stringent regulations, they also get a glimpse of whether they can implement similar policies should they want to. After all, not every country has the same political willpower to enact such policies.

However, given the decentralised nature of cryptocurrency, the crackdown is also not without its costs. An implication for entrepreneurs outside of China is that they can now enter bitcoin mining since mining in China is no longer viable. In addition, innovations that would have otherwise been discovered and scaled in China may also now appear elsewhere.

Cryptocurrencies would never be completely curbed even if all big economies decide to pass similar laws like China. It is a manifestation of a natural capitalist desire to become rich using this new technology. However, there are some lessons to be learnt.

For cryptocurrencies, many countries such as Australia and Singapore have created a regulatory sandbox to test and learn how new technologies would interact with existing players in the financial system. With China taking the front seat in passing stringent regulations, they also get a glimpse of whether they can implement similar policies should they want to. After all, not every country has the same political willpower to enact such policies.

If the crackdown is a success, it presents a playbook for other regulators to follow suit. Therefore, the world will watch these developments closely. Each country has to face its own trade-offs between the financial system’s stability and innovation.