Will e-CNY spur the internationalisation of the RMB?

Academic Pei Sai Fan notes that China’s active promotion of the e-CNY has been closely linked to its ambitions of turning the RMB into a global trade and reserve currency. He says that the internationalisation of the RMB cannot be rushed. The more important thing for China to do now is to work on building its capabilities for crisis and risk management as well as gaining international support. 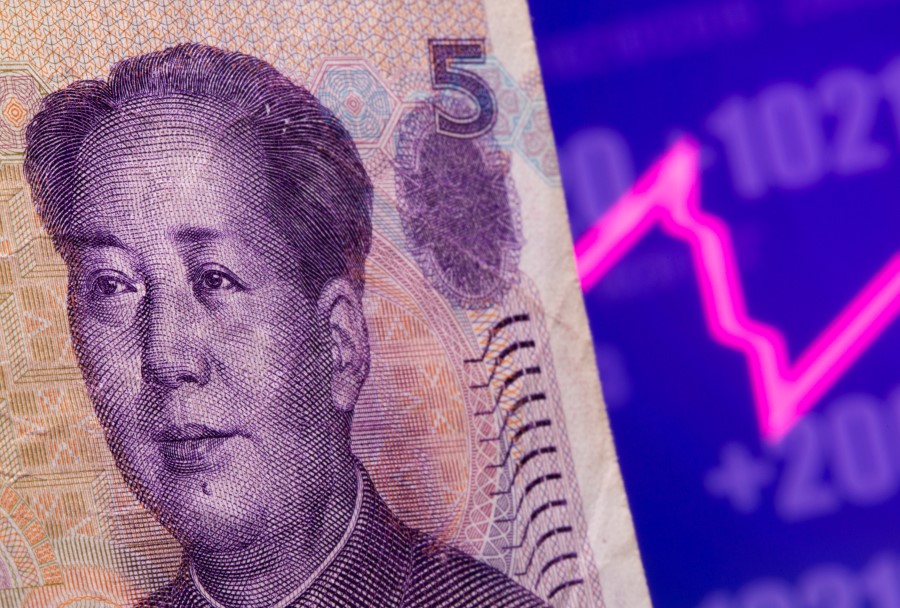 A Chinese Yuan banknote is seen in front of displayed stock graph in this illustration taken on 7 May 2021. (Dado Ruvic/Reuters)

Candice Chan - 27 September 2021
In 2020, Japan was ASEAN’s largest export partner of auto parts, making up 17.8% of ASEAN's exports, followed by the US (15.4%) and China (10.2%). However, with the onslaught of the Delta variant of Covid-19 this year, many Southeast Asian countries have imposed factory operation restrictions that have disrupted the supply chain, with Japanese firm Toyota Motor suffering the greatest impact. Japanese academic Sukegawa Seiya examines the issue.
Read more

Candice Chan - 27 September 2021
With Prime Minister Yoshihide Suga stepping down, whoever wins the Liberal Democratic Party leadership race is practically assured of becoming the next prime minister. But with four experienced politicians on the cards, including two women, who will it be? And how will the choice of the next prime minister affect Japan's policy towards China? Japanese academic Shin Kawashima examines the possibilities.
Read more

Universal Studios Beijing: With 5,000 years of culture, can China create its own theme park?

Candice Chan - 27 September 2021
Universal Studios Beijing opened to much publicity, with tickets being snapped up in just one minute. But some detractors question if this is exactly the sort of imperialism that China has grown out of and it should be developing its own mega attractions with Chinese elements. Would doing so simply entail rejecting Western influences? How can it develop a concept that truly reflects a flavour of China or its popular culture?
Read more

Candice Chan - 22 September 2021
Following a block of pineapple imports from Taiwan in February, mainland China has followed up with a halt on sugar apples and wax apples. While the blocks were seemingly due to pests found on the fruits, could there be a political reason behind the moves? And could the moves help achieve China's aim?
Read more
Translated by Candice Chan on 10 June 2021

Recently, China has been actively pushing the research and pilot testing of the e-CNY, its central bank digital currency (CBDC) which has a clear lead over the rest of the world. And now amid the pandemic, the US has once again implemented quantitative easing, leading to a depreciation of the US dollar along with expected inflation and hot money flows disrupting the financial markets of emerging countries.

Billionaire Ray Dalio, founder of the world’s largest hedge fund, Bridgewater Associates, recently also commented in an interview with CNBC: “I think you're going to see the renminbi become a more significant, a strong currency, stable currency, more attractive-returning currency, and also a more widely used currency… in the years ahead… I think incrementally it will happen faster probably than most people expect.”

Conditions for internationalisation of the RMB still not fully established

First, developing and strengthening the breadth and depth of China’s financial markets is a necessary financial condition. Only a mature, well-regulated, and well-managed financial system with a deep and large-scale capital market can provide attractive investment avenues for offshore RMB, to ensure stable long-term value preservation and appreciation, so as to make the RMB more attractive.

Second, with the blessing of Chinese President Xi Jinping’s speech at the 2018 Boao Forum for Asia, China has only recently fast-tracked and expanded the opening up and internationalising of its financial markets. With greater openness, there will be increased and significant inflow and outflow of domestic and overseas capital, which means that China’s financial sector will be more open and affected by changes in the external environment. Adjustments to the monetary policies of developed countries and changes in international interest and exchange rates can lead to a large inflow and outflow of capital, which would make the domestic market more volatile and have an impact on the stability of China’s financial markets.

Third, for a sovereign currency to be used as an international currency, there has to be international support and cooperation; it will not happen just because China is willing or says so. China needs to work harder at international diplomacy on the world stage, to get more countries to support and agree to the internationalisation of the RMB, in ways such as improving the international community’s understanding and respect for China’s systems and governance in politics, economy, finance and society, as well as the setup and processes of its legal and judicial systems.

The internationalisation of the RMB will not happen overnight, but it will gradually come into being if and when conditions support it. Former Governor of the People's Bank of China (PBOC) Zhou Xiaochuan has said on several occasions that the internationalisation of RMB should be a gradual and step-by-step process, and last month he stressed again that it will depend on China’s higher-order thinking on institution and policy choices, as well as progress in China’s reform and opening up, rather than technological factors.

From China’s evolving response to the “impossible trinity”, we can see that China is currently not in a rush to internationalise the RMB.

The impossible trinity was proposed by US economist Paul Krugman in addressing policy choices for an open economy. It says that that out of three goals: (1) an independent monetary policy, that is, control of the domestic interest rate; (2) a fixed or stable exchange rate; and (3) free capital movement, a country can only attain two. Before opening up, China chose to have full control of interest and exchange rates, hence it had to restrict capital movement, and so China implemented capital account controls.

In 1996, the RMB became convertible for current account transactions and China started to promote capital account liberalisation as its economic ties with the world increased. But because of great changes in the international and domestic financial and economic environment later on, the project met with severe challenges in the process. One good example was when the PBOC announced the “811 Exchange Rate Reform” on 11 August 2015 which reformed the central parity system of the RMB exchange rate to let the market play a bigger role in determining the RMB exchange rate. With this reform, the exchange rate between the RMB and US dollar would be based on the previous day’s closing rate of the inter-bank foreign exchange rate market.

Unfortunately due to the domestic economic slowdown and the strong pressure from the US dollar interest rate hike, the RMB experienced significant downward pressure following the announcement of the “811 Exchange Rate Reform”. A massive outflow of domestic capital prompted the authorities to reconsider the pace of RMB exchange rate market reform while intervening in the foreign exchange market to halt the RMB fall and controlling the outflow of domestic capital. The prevailing view including that of state media then was that China’s exchange rate policy should have been focused on stability rather than making changes too quickly so that the larger objective could be taken care of. That is, macroeconomic management should be the priority and ensuring steady economic growth should come first.

China is currently not choosing two of the three goals, but attaining the goal of controlling the domestic interest rate while liberalising its capital account in a controllable fashion, and at the same time gradually allowing market forces to determine the exchange rate.

So to this day, China’s preferred approach in dealing with the impossible trinity is maintaining an independent monetary policy, taking gradual and controllable steps towards capital account liberalisation, and implementing a managed floating exchange rate regime to allow the RMB to fluctuate within a reasonable range. In other words, China is currently not choosing two of the three goals, but attaining the goal of controlling the domestic interest rate while liberalising its capital account in a controllable fashion, and at the same time gradually allowing market forces to determine the exchange rate.

Such a gradual and orderly approach is important because it gives policymakers time to build systems and measures, and to accumulate experience in dealing with financial market turbulence or even financial crises. It also provides an opportunity for the foreign exchange and financial derivatives market to grow, and also gives financial industry players valuable time and opportunity to practise and hone their financial risk management abilities. But such an approach must also mean that efforts to internationalise the RMB cannot be rushed and must be carried out in tandem with capital account liberalisation.

Next, using sovereign currency as reserve currency or currency for international transactions is inherently flawed because it cannot accommodate different goals at home and abroad. Taking today’s US dollar as an example, the formulation of US monetary policy obviously cannot ignore the economic conditions and interests of the US and at the same time be able to meet the demand arising from changes in global liquidity conditions. This is why Zhou Xiaochuan said in 2009 following the global financial crisis and the quantitative easing implemented by the US: “To avoid inherent shortcomings in using a sovereign currency as a reserve currency, we need to create an international reserve currency that is divorced from sovereign states and is able to maintain a stable value over the long term.” This is part of the goal of an ideal international monetary system reform.

Former governor of the Bank of England and former chair of the Financial Stability Board Mark Carney said during the Jackson Hole Symposium in August 2019 that the US dollar’s hegemony as the world’s reserve currency must come to an end in order to weaken the spillover effects of a US dollar unipolar system. However, he thought that the US dollar’s reserve currency status would be better taken over by some form of digital currency such as Facebook’s “Libra” (now named as “Diem”) than another sovereign currency such as the RMB.

In other words, if the RMB is to become the next reserve currency and global currency to be used in international trade, several obstacles need to be overcome. Apart from the likely resistance from Western powers such as the US and the UK, there are also developments that may unfold in the medium to long term, such as the increasing international community’s lack of confidence in the sovereign currency, and various future possibilities involving digital currency technology, all of which may pose considerable uncertainties.

Instead of jumping on the bandwagon and irrationally proclaiming that the internationalisation of the RMB is just around the corner, it is better to pursue a pragmatic approach in boosting one’s own internal strengths and working within one’s capacity. A good example is, in February this year, China announced that it will be participating in a central bank digital currency project for cross-border payments — the Multiple Central Bank Digital Currency (m-CBDC) Bridge, together with Hong Kong, Thailand, and the United Arab Emirates. This project will explore the application of central bank digital currency in cross-border payments and facilitate the exchange of domestic and foreign currencies in cross-border trade scenarios. This will be of practical help to efforts to internationalise the RMB.

Related: Token economics: How Singapore can boost synergy with China in building digital economies | Building an integrated digital economy: How Asia can continue to thrive in the post-pandemic era | Why is China moving to curb the RMB’s sharp rise?