Building an integrated digital economy: How Asia can continue to thrive in the post-pandemic era

With the pandemic showing little signs of slowing and as countries around the world shift away from the traditional economy, academic Pei Sai Fan notes that this is an opportune time for Asia to boost its digital economic sector. Namely, there will be the opportunity to consider building a more integrated Asian digital economy and to promote Asian digital trade and a common digital currency. 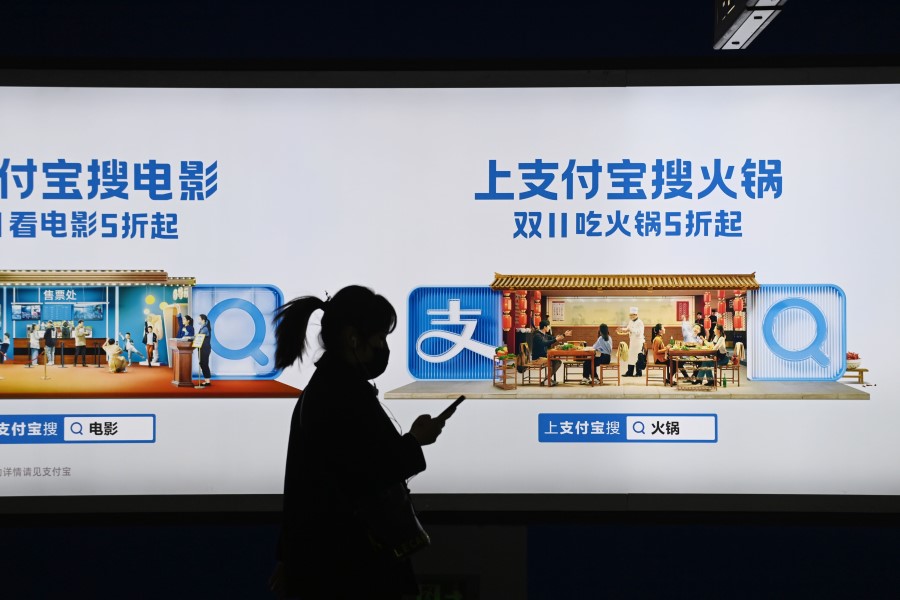 This file photo taken on 27 October 2020 shows a woman walking past an Alipay advertising billboard in a subway in Beijing. (Greg Baker/AFP)

Candice Chan - 30 January 2023
A mall in Shenzhen came under fire for putting up white lanterns with black text as part of its Chinese New Year decorations, while an “ugly” rabbit-shaped light decoration was removed from another mall in Chongqing. Academic Zhang Tiankan muses on tradition and innovation, and the evolution of traditional decorations.
Read more
Translated by Candice Chan on 1 February 2021

In simple terms, a digital economy refers to an economy that uses digitised knowledge and information to guide and improve resource allocation, raise productivity, and bring about high-quality economic growth. On a technical level, it includes the use of new technologies such as big data, cloud computing, internet of things (IOT), blockchain, artificial intelligence, and 5G communications.

According to the 2020 China Internet Development Report, China’s digital economy in 2019 was worth 35.8 trillion RMB, or 36.2% of its GDP, putting it among the top in the world in terms of scale and growth rate. The fifth plenary session of the 19th Central Committee of the Chinese Communist Party (CCP) in December 2020 unambiguously proposed stepping up the development of digitalisation, promoting the formation and growth of the digital industrial sector, and strengthening international cooperation in areas such as internet infrastructure, big data, cloud computing and e-commerce, to build the Digital Silk Road.

The recent signing of the Regional Comprehensive Economic Partnership (RCEP) and the successful conclusion of negotiations on the China-EU investment agreement are expected to provide positive impetus for global economic recovery. These two agreements include significant content on cooperation in the digital economy, such as in the areas of trade digitalisation, cross-border e-commerce, and fintech among the signatory countries. This will certainly help China, Asia, and ASEAN unleash their enormous growth potential in the digital economy in the post-pandemic era.

ASEAN is a region of many young people, with over half of its population aged below 30. Smartphones are prevalent among the young and the internet economy is growing at an astonishing rate which is set to hit US$300 billion by 2025. In January 2021, after his official visits to several ASEAN nations, namely Myanmar, Indonesia, Brunei, and the Philippines, Chinese State Councilor and Foreign Minister Wang Yi stressed that China would build closer ties with ASEAN, including cooperation in the digital economic sector, to bring China-ASEAN relation to new heights.

Singapore and China can contribute towards building an Asian digital economy

In Asia, building the digital economy has been a key part of the strategic development of Singapore and China in recent years, and results have been remarkable. Digitisation has permeated and impacted the various segments of production, distribution, consumption, and import and export. Online retail sales, cross-border e-commerce, online education, online medical consultation, and working remotely, as well as the various resource sharing platforms, have bolstered consumption of digital services and helped stabilise the job market.

Digital technology has also fundamentally changed the production methods and business models of traditional economies. For example, the emergence of online industrial platforms has given a boost to the precision planning and production of manufacturing companies. It has also helped promote supply chain platforms for companies to achieve systematic and integrated management in the flow of business, goods, capital, and information. In the area of finance, a series of cutting edge fintech innovations have created new financial ecosystem platforms and the possibility of inclusive finance.

In the area of digital connectivity, the Blockchain-based Service Network (BSN) established by China’s Department of Informatization and Industry Development of the State Information Center is a second-generation global internet infrastructure based on consortium blockchain technology and a consensus mechanism of trust. It provides blockchain infrastructure resources for the public that greatly reduces the costs of blockchain development, setup, operations, connectivity, and regulation, thereby allowing the rapid pervasive use and development of blockchain technology, which would encourage Asia’s infrastructure to go digital and “smart”, and help with the digital transformation of the economy and promote inclusive growth.

Singapore has gained much experience in planning and building institutions, systems, and measures in international trade cooperation and connectivity, as well as in the governance, setting of standards for and regulating the new technologies and the digital economy.

With the rise of new information technologies and the digital economy, Singapore has in recent years taken an active lead in establishing digital economic partnerships with countries such as China, New Zealand, Australia and Chile, as well as ASEAN. New bilateral Digital Economy Partnership Agreements are signed to boost digital connectivity, and this includes cooperation in digital trade, interoperability between digital systems, enhanced cross-border data flow, data innovation, and fintech.

For example, the vision behind setting up the ASEAN Smart Cities Network and building an open data network for ASEAN is to promote digital integration in regional economy and trade. Also, the creation of data corridors connecting cities such as Chongqing, Guangzhou, and Shanghai with Singapore will boost digital economic and trade cooperation between China and Singapore.

From yesterday’s trading nation to today’s digital economy, Singapore has gained much experience in planning and building institutions, systems, and measures in international trade cooperation and connectivity, as well as in the governance, setting of standards for and regulating the new technologies and the digital economy.

The significance of pushing for an Asian digital economy

First, with the rise of protectionism, there was already a structural slowdown in global trade growth. The current pandemic has led many countries to reverse or reconsider the trend of globalisation, and to reassess and review the risks of overreliance on the international industrial supply chain, and to possibly increase local or regional production of some goods and products, which would mean further shrinkage of global trade.

The United Nations Conference on Trade and Development (UNCTAD) noted that global trade in 2020 is expected to shrink by about 7-9% as compared to 2019, and closer cooperative ties in digital trade within Asia would help Asian countries to withstand the impact of shrinking global trade, or to buffer the blow.

The growth of the Asian digital economy will enable better coordination and integration of businesses in Asia, create a new Asian industrial value chain, and build the Digital Silk Road in Asia.

Second, given the trend of regional production, and different levels of economic development, some ASEAN countries have clear advantages over China in terms of production costs such as land and manpower, prompting international firms in China to initiate or expedite the shift of part of its production process to these ASEAN countries. The growth of the Asian digital economy will enable better coordination and integration of businesses in Asia, create a new Asian industrial value chain, and build the Digital Silk Road in Asia.

Third, according to the International Monetary Fund’s outlook report on the Asia-Pacific region released in October 2018, the level of digitalisation in various Asian economies is higher than that of countries in other regions overall income groups. Even the relatively poorer Asian economies are going digital at an ever-increasing pace. Over the past 20 years, digital innovation has contributed about a third of Asia’s per capita economic growth. Asia will lead global digitalisation, and will benefit greatly from the growth of its digital economies. For instance, e-commerce seems to be boosting companies’ productivity, and going digital may help improve targeted expenditure and streamline taxation processes.

Finally, building up an Asian digital economy will strengthen ties between Asian economies, which would help Asia’s economic integration, regional security, and even regional political stability.

Related: Regulating new technologies: Singapore and China can work together | Will China's digital currency accelerate the internationalisation of the RMB? | China's tightening fintech regulations may benefit Ma Yun's Ant in the long term