At a study session on international communications for the Chinese Communist Party, Chinese President Xi Jinping called on China to build an image of a “credible, lovable and respectable China”. Putting aside the euphemism, says Zaobao associate editor Han Yong Hong, what is most important is how the goal can possibly be achieved in China’s current diplomatic context. 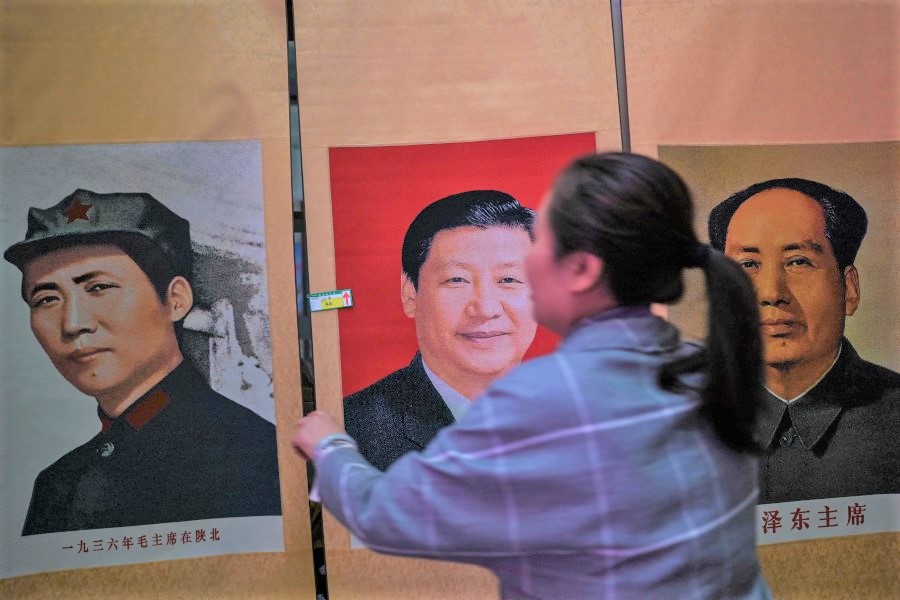 This picture taken during a government organised media tour shows a seller holding a portrait of the Chinese President Xi Jinping next to pictures of the former Chinese leader Mao Zedong at Dongfanghong Theatre in Yan'an, the headquarters of the Chinese Communist Party from 1936 to 1947, in Shaanxi province on 10 May 2021. (Hector Retamal/AFP)

Candice Chan - 25 January 2023
While the Americans have made noticeable progress in their “pivot” to Asia, the crux of successful regional engagement rests on Washington’s ability to work with and around China’s indisputable links and influence in this part of the world, while managing its own relationship with Beijing.
Read more
Translated by Candice Chan on 4 June 2021

With international goodwill towards China deteriorating since the pandemic, ridding the country of its “wolf warrior” tag and giving the country a more likeable image is probably high on the agenda of the top leaders.

In the CCP’s vocabulary, “international publicity” is a positive term, but in the Western world, it is interpreted as “propaganda”. China is aware of the nuances, and has in recent years reduced its use and replaced it with the more trendy “international communications”.

At the session on 31 May, President Xi Jinping called for strengthening and improving China’s international communications efforts. He raised three objectives within and beyond China: developing an "international voice" to match its national strength and global status; creating a conducive external environment for China’s stable reform and development; and making a positive contribution to building a “community with a shared future for mankind”.

The text released by Chinese authorities did not include the word “improve”, or mention “wolf warrior”, but it is clear that China wants to shed its wolf warrior image. For example, Xi called for “strengthening and improving” international communications, and making “Chinese culture more attractive, China’s image more friendly, China’s narratives more persuasive, and China’s voice more influential on the world stage”.

Xi said plainly that China wanted to “enable the world to appreciate the CCP’s sincere efforts for the good of the Chinese people”, and that it needs to “get its tone right in being open and confident, but also modest and humble, as it works to create an image of a credible, lovable and respectable China”.

Xi said on 31 May that China wants to make friends and bring together the majority, and expand its circle of international friends who know China.

The keywords above were not highlighted in Chinese media, but were immediately picked up by Bloomberg, Fortune magazine, CNN, Washington Post, and BBC. Everyone interpreted this as China possibly adjusting its hard diplomatic stance, and all used “lovable” in their headlines — even though this English translation is not entirely apt — but from a communications angle, it does attract a lot of attention.

The first line of the CNN report reads: “Xi Jinping wants China to learn how to make friends and influence people.” This interpretation is correct, because Xi said on 31 May that China wants to make friends and bring together the majority, and expand its circle of international friends who know China. He added that China has to be focused on the strategies and art of rhetoric, in order to be more effective and appealing when engaging the world.

The close attention paid to the speech at the Politburo session is indicative of the controversy that the so-called “wolf warrior diplomacy” has generated since 2019. Over the past two years, China has clashed with countries such as the US and Australia over trade, media reports and the expulsion of diplomats and academics, as well as over the origins of Covid-19 and human rights issues in Hong Kong and Xinjiang. The aggressiveness displayed by Chinese diplomats in their rejoinders to criticisms has been coined wolf warrior diplomacy. The clash between Politburo member Yang Jiechi and US Secretary of State Antony Blinken in March this year only served to reinforce this image of China.

Wolf warrior diplomacy is a clever label that puts China on the back foot in the face of criticism. At the same time, Chinese officials often fall into the trap of their own accord.

Wolf warrior diplomacy is a clever label that puts China on the back foot in the face of criticism. At the same time, Chinese officials often fall into the trap of their own accord. When it faces constraints, China sometimes chooses to use harsh language instead of tough measures. In other words, its bark is at times worse than its bite, but its comments are not well received nevertheless.

Moreover, China’s domestic needs affect or stymie their international publicity efforts. In the face of massive external pressure, wolf warrior diplomacy is used to stir up nationalism and bolster domestic unity to the detriment of its international image.

Now that China seeks to “improve” the country’s international communications, it may suggest that crises at home have been overcome and the higher-ups are more confident. But it also shows that the top leaders are aware that if China’s international image continues to deteriorate, not only would its speaking rights and influence not be strengthened, its international collaborations and core interests would be harmed as well.

Interestingly, the massive Western media attention paid to the Politburo’s study session is helpful for China, and can even be considered “positive reports” which have been rare in recent years.

Interestingly, the massive Western media attention paid to the Politburo’s study session is helpful for China, and can even be considered “positive reports” which have been rare in recent years. While the Western media questions if China can really build a friendly international image, and even predicts that it will be difficult for China to change, their attention affirms the improvements that China aspires to make. For once, Chinese and Western media are in agreement.

Now, the CCP has explicitly made the strengthening of international communications a key performance indicator in ideological work and instructed its leaders at all levels to set a good example. The world is waiting to see what other changes are afoot.

Not what you say but how you say it

Lastly, I want to point out that the biggest difference between international communications and international publicity does not lie in the content, but in the approach and goal. Does the approach seem coercive? What is its purpose? To encourage closer relations and mutual trust, or to seek to establish a united front? Ultimately, whatever it is called, if such behaviour is inherently politically coercive and is meant to be a united front operation, it will be rejected. But if it is used to enhance mutual trust and develop soft power, it is a welcome prospect, as China still has many stories to tell and many “lovable and respectable” aspects waiting to be discovered. If a country can do well in international communications, it means that it has already taken a crucial step forward on the road towards modernisation.

Related: Yes, there is a problem with being a wolf warrior | Is China the 'big bad wolf' the US has made it out to be? | Chinese state media poll: 70% of Chinese approve of wolf-warrior diplomacy | China's wolf-warrior tactics confusing, misleading and unprofessional | ‘Wolf-warrior diplomacy’: China's new normal? | The problem of inappropriate language in China's diplomacy