China feeds about 20% of the global population, but its overall self-sufficiency in food seems to be dropping. Even though it is self-sufficient in some staples such as wheat, rice and corn, it is less so in others. In fact, it is the largest importer of food in the world. Recent calls by President Xi Jinping to cut food wastage has people thinking that political reasons aside, China’s food supply is at risk. This risk could yet be amplified by changes in land policies, rural-urban migration and more. 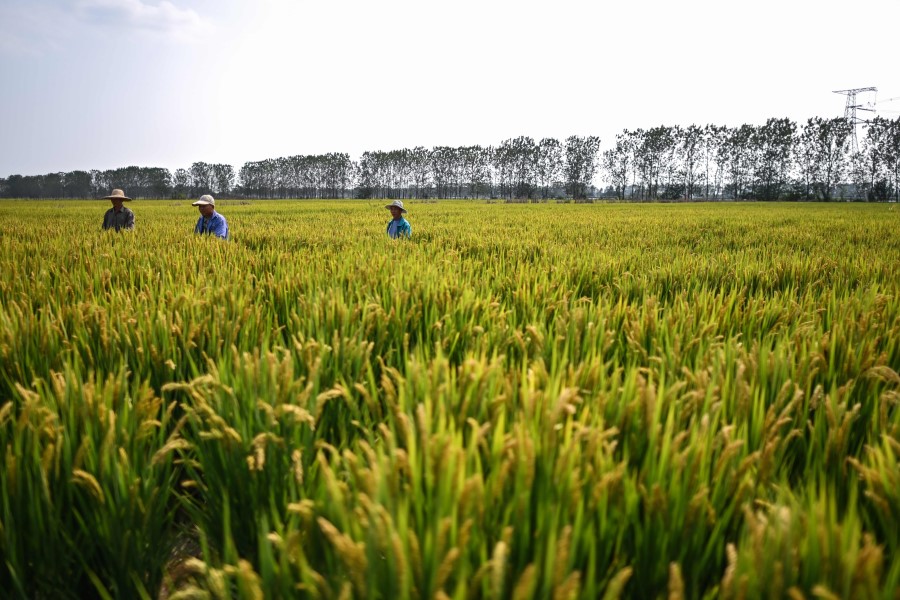 People work in a rice field of Runguo Agriculture Development Company during a media tour organised by the local government in Zhenjiang, in China's eastern Jiangsu province on 13 October 2020. (Hector Retamal/AFP)

Candice Chan - 18 May 2022
The Chinese government has recently announced plans to establish a unified national market that is highly efficient, standardised, open and competitive. It would break down walls, raise the standards of the business environment within China and act as a buffer against external pressures. While the intention is good, NUS academic Lu Xi points to possible drawbacks and challenges.
Read more
Translated by Candice Chan on 14 October 2020

China may be a major agricultural country, but it is not an agricultural power. Its arable land per capita is lower than the global average — with 7% of the world’s arable land, it sustains as much as 20% of the global population. As such, keeping the food supply chain unbroken has become a top priority in the country’s strategic security objectives.

The Chinese government has declared that China’s food security is the best it has ever been. However, China’s self-sufficiency in food has always fallen below secure levels, leading it to import a lot of food products. In particular, this year, China’s food security has been affected by the pandemic, floods, and locusts, highlighting the shortage in food supply.

Xi’s call to stop food wastage got things moving — from the government machinery to the people, there has been a new movement to curb indulgence and to “clean one’s plate”.

Firstly, the alarm regarding China’s food security is related to anti-corruption. Within a space of 20 days, Xi spoke twice on food security, alluding to an insufficiency in China’s food supply. Xi’s call to stop food wastage got things moving — from the government machinery to the people, there has been a new movement to curb indulgence and to “clean one’s plate”.

A report released this year by the Chinese Academy of Social Sciences noted that by 2025, China will fall short of about 130 million tonnes of food.

A report released this year by the Chinese Academy of Social Sciences noted that by 2025, China will fall short of about 130 million tonnes of food. Xi’s call for prudence has political and social significance. Its aim is not just to reduce the uncertainty threatening food security, but also to follow through on the constant push against corruption (in terms of hosting extravagant meals), and along the same vein, to root out “micro-corruption” swirling around ordinary people.

China’s food security policy is built on self-sufficiency. It aims to build a uniquely Chinese concept and programme of food security, through strengthening assistance plans for the food sector, safeguarding food production resources, strengthening China’s grain reserve system and having ample provisions on hand so that people will not panic, and reinforcing the idea that the food industry is a strategic sector that plays a key role in the well-being of the nation. The Chinese government has pegged food security as a “major prerequisite for national security”: in October 2019, China’s State Council released a white paper titled “Food Security in China” saying that “China is self-sufficient in grain supply” and that “China ensures the absolute security of staple grains”.

Second, the fact that the Chinese government highlighted its self-sufficiency in “staple grains” as a sign of its food security, shows that it has confused “food” and “staple food”, which made the paper unconvincing. Apparently, the food security goals that were charted in the Chinese government’s 2008 plan, which set out medium and long-term targets for the period from 2008 to 2020, have not all been met.

Consumer demand in 2020 is projected to be 395 kg of food per person over the year, with a total demand of 570 million tonnes and at least 95% self-sufficiency. Arable land for production was 1.8 billion mu (120 billion hectares) in 2007, and is expected to stay about the same in 2020. In these two major indicators, the self-sufficiency of 95% has not quite been met.

In 2018, the authorities claimed that self-sufficiency in wheat, rice, and corn was “about 95%”. In 2015, China’s National Bureau of Statistics analysed the projected and actual figures for China’s food self-sufficiency, and noted that the target of at least 95% self-sufficiency in grains — as set out in the 1996 white paper on food supply — was met, and the figure was higher than the internationally accepted secure level of 90%.

Besides, when it comes to whether China is facing a food crisis or shortage, in the early 1990s, US academic Lester Brown already raised the question in his book Who will feed China?. The Chinese government’s 1996 white paper on food was a direct response to that while the 2019 white paper mentioned above also states that since 2015, total food production was steady at above 650 million tonnes, and in 2018, food storage was at 670 million tonnes.

The Economist magazine’s global food security index shows that China has dropped from number 42 in 2013 to number 46 in 2018.

China the largest food importer in the world

China imports over 100 million tonnes of food a year, or a quarter of global food trade, making it the largest food importer in the world. The Economist magazine’s global food security index shows that China has dropped from number 42 in 2013 to number 46 in 2018. Its food security issue is growing increasingly clear.

...with growing urbanisation, the farming population is expected to fall to 20%, with the elderly in rural villages at 25.3%, or nearly 124 million people.

Finally, agricultural restructuring would make China more reliant on food imports. In September 2020, the Rural Development Institute of the Chinese Academy of Social Sciences released a report saying that by the end of China’s 14th Five-Year Plan (covering 2021 to 2025), China might see a food shortage of 130 million tonnes; even including the three staple grains, the deficit would be about 25 million tonnes. The report also forecast that by 2025, urbanisation would reach 65.5%, with an estimated 80 million people relocated away from farming villages. In other words, with growing urbanisation, the farming population is expected to fall to 20%, with the elderly in rural villages at 25.3%, or nearly 124 million people.

Growing urbanisation in China would lead to structural changes in agriculture and a smaller farming population, which might reduce food production. Especially in terms of structural issues — while the 13th Five-Year Plan has seen success in pushing for food security, as well as the transformation and upgrading of the farming industry, farmers are less active in growing crops, while an ageing population is making it more difficult to maintain harvests.

By contrast, from January to June 2020, food imports have shown a significant increase to about 60.9 million tonnes, worth about US$22 billion.

Even as China has been hit by a host of natural disasters this year, the authorities maintained that the yield of summer crops hit a record high, accounting for about a quarter of total food production. Autumn crops account for three-quarters of the total, but with the impact of floods, locusts, and other autumn insects, production would be reduced.

Currently, China’s state grain reserve system has been buying less from local governments. As of 5 August, they purchased a total of about 42.85 million tonnes of wheat from major production areas, in a reduction of about 9.38 million tonnes over the same period in 2019. According to the National Food and Strategic Reserves Administration, purchases of summer crops has gone down by about 30% as compared to the same period in 2019.

By contrast, from January to June 2020, food imports have shown a significant increase to about 60.9 million tonnes, worth about US$22 billion. In particular, some 1.78 million tonnes and US$400 million worth of sorghum has been imported, which is 155 times and 140 times the respective figures in 2019; as for wheat, about 3.35 million tonnes has been imported, nearly twice as much as compared to 2019. Growing urbanisation, an ageing population, natural disasters such as floods and infestations might lead to lower production and concerns about food security.

Related: Food scraps and empty new apartments: China’s fight against wastage | The impact of Covid-19 on the agriculture sector in China | Will China plunge into a food crisis? Officials say no