[Photo story] The Hong Kong eateries we will miss

The F&B industry has been one of the hardest hit as the world goes through these extraordinary times. ThinkChina winds through the streets of Hong Kong for a look at the eateries and restaurants that have (temporarily) lost their battles with the months of political unrest and the raging Covid-19 pandemic. 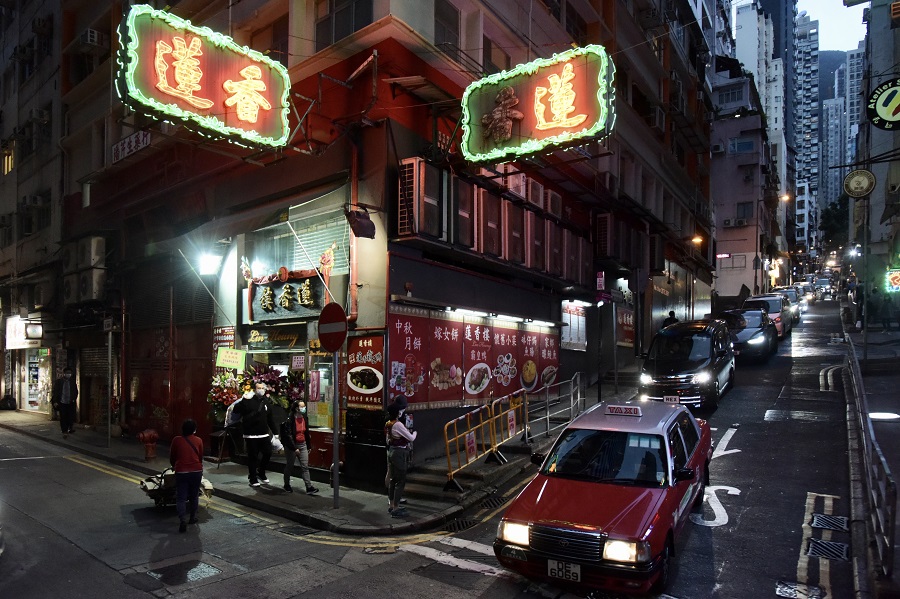 This photo taken on 11 March 2020 shows the exterior of Lin Heung Tea House when night has fallen. (HKCNA/CNS)

Grace Chong - 25 November 2022
China’s resurgence of Covid-19 infections has widened the gap between the young workers opposed to the tightening of controls, and the older generation that feel safer with strict measures in place. Given that the elderly make up a high proportion of the Chinese population, Chinese authorities seem to be holding fast to the dynamic-zero policy. Zaobao correspondent Wong Siew Fong tells us more.
Read more
Translated by Grace Chong on 7 April 2020

After being dealt a big blow from the anti-extradition bill protests last year, Hong Kong is battered yet again by the Covid-19 pandemic. Severe social distancing measures have led to devastating economic impacts, not least in the food and beverage (F&B) sector. Hallmark eateries and restaurants of Hong Kong’s food culture have fallen one by one, signifying the passing of an era. Food not only fills the stomach but also warms the soul. With the closing of these iconic names, what will happen to the collective memories of generations of Hong Kongers?

On 29 March, the Hong Kong government imposed tougher measures to contain the spread of Covid-19. Hong Kongers will no longer be allowed to gather in groups of more than four, and leisure venues for public gatherings will be shuttered. Bars were also closed on 3 April. With the current number of confirmed cases standing at over 950 and their death toll at 4, on 8 April, the authorities have decided that the measures will be extended to 23 April. Needless to say, well-loved restaurants, including some time-honoured brands, have taken a big hit since the implementation of these measures.

Among them is Tsui Wah, a 茶餐厅 (cha chaan teng), literally "tea restaurant" offering signatures such as pork chop bun and milk tea. It is a household name among generations of Hong Kongers and even those abroad (they set up their first outpost in Singapore about two years ago). It has suspended operations at its flagship store on Wellington Street since 23 March.

Se Wong Yee (蛇王二), a humble Chinese restaurant nestled in Causeway Bay that sells snake soup and roasted meat, is another eatery that will be closing amid the pandemic. With almost 40 years of history, this Causeway Bay landmark that is always be packed to its brim during peak hours will be shutting its doors when its lease expires at the end of April. Restaurant manager Lo Cheong Hei told HK01 during an interview that he hopes this is only a temporary goodbye and wishes to set up the restaurant again after the pandemic blows over.

Many fans were sad to see it go, expressing their regrets on social media.

Another eatery that will close is Hui Lau Shan (许留山), a handmade dessert shop known for its mango desserts. This time-honoured brand was established in the 1960s, and had sold guilinggao and herbal tea on food carts originally. It was not until the 1970s that it had a physical store. In the 1980s, it underwent a period of transformation and began selling a variety of desserts. 1992 was the year business really took off with their renowned mango sago dessert. In the 2000s, through rounds of innovation and transformation, it expanded its business model and opened its first branch in Shenzhen, officially breaking through into the mainland Chinese market. It also has branches in Malaysia and Singapore.

Yet, even a dessert shop that holds many childhood memories for the Post-90s generation is helpless before the pandemic and the violent protests last year. Having not been able to pay for their rentals for a prolonged period of time due to its declining business, multiple Hong Kong Hui Lau Shan branches have ceased operations. Its branches in mainland China are still operating as per normal, however, as indicated on the shop’s official Weibo account.

Upon hearing news of the closure of Hui Lau Shan, heartbroken fans penned their thoughts on their social media accounts, reminiscing about their time spent at the famous dessert shop.

Another traditional eatery that has ceased operations until further notice since 1 April 2020 is the Luk Yu Tea House situated in Central, Hong Kong. Established in 1933 and later relocated to its current address at Stanley Street in 1976, it retained its old-fashioned decor and has been faithfully serving tea and dim sum to its customers for the past 87 years.

Interestingly, the modest Luk Yu Tea House was also the crime scene of a fatal hired assassin case that shook Hong Kong in 2002. On 30 November 2002, wealthy businessman Harry Lam Hon-lit was shot at the back of his head by a hitman from mainland China. The bullet went through his head and exited through his right temple. He died after being rushed to the hospital. The mastermind of the contract killing, Hong Kong actor-turned-businessman Yeung Ka-on, was sentenced to life imprisonment.

It was as if such a scenario could only happen in thriller movies. Yet, blood was indeed shed and a life was lost. Luk Yu Tea House would always be remembered for such an episode in its history.

Other restaurants facing the chopping block have equally rich movie cred. The iconic Jumbo Floating Restaurant (珍宝海鲜舫) that is famous for its seafood has closed on 3 March until further notice. The restaurant was established in 1976 by Macau casino tycoon Stanley Ho Hung-sun. The company later acquired the Tai Pak Floating Restaurant in 1987 and the two floating restaurants became jointly known as Jumbo Kingdom. Built with oriental design elements, the tourist landmark contains many traditional Chinese motifs and has served millions, including royalty and film stars from Queen Elizabeth II to Tom Cruise and Chow Yun-fat.

Sadly, fans of this iconic floating restaurant will have to rely on the movies that captured its past glory to reminisce the good old days. Temporarily, at least.

Also disappearing from the Hong Kong food scene is Mido Cafe (美都餐室). Opened in 1950, Mido Cafe is an old-school cafe situated in Temple Street that sells traditional Hong Kong-style breakfast, including speciality dishes like baked pork rib rice, french toast, and yuanyang (coffee with tea). 70 years into its operations, it announced a 14-day temporary closure starting 30 March. However, it remains uncertain when it will reopen again.

As a classic backdrop of many Hong Kong dramas and movies, Mido Cafe appeared in TVB series Revolving Doors of Vengeance, and Street Fighters, as well as movies such as Goodbye Mr. Cool (2001) and Chasing the Dragon (2017). It exemplified Hong Kong’s cha chaan teng culture and witnessed the passing eras of Hong Kong.

Yet, all is not lost for some eateries. One eatery still standing proud amid political unrest and the ongoing pandemic is Lin Heung Tea House (莲香楼). Located at Wellington Street, this Chinese restaurant prides itself on serving up the most traditional Cantonese dim sum and in the most traditional manner as well, by screaming and calling out of orders while pushing dim sum carts around the restaurant.

Serving its loyal customers for almost a century, Lin Heung Tea House ceased its operations last year after its landlord failed to renew its lease. Yet, a year after a change of owners and name, its new owners could not keep it running due to political unrest and handed the tea house back to its former owners, who later replaced the new name with the old one. In an interview with HK01, the fourth-generation business owner from the Ngan family said that while sales have dropped by 70%, he hoped that the tea house would focus on maintaining the quality of its food and restore its business after the pandemic subsides. (NB: less than three weeks after its original owners took over the tea house on 11 March 2020, it announced that it would be temporarily closing for an indefinite period of time starting 30 March 2020.)

A Hong Kong blogger writes in a blog post that the "yellow economic circle" should be renamed the "economic circle with a conscience" as their members did not only hold different political views from the "blue" stores; they also wanted to do the right thing. Although their businesses were badly hit by the pandemic, "yellow" stores pledged solidarity with medical workers by offering them discounts at their eateries or even allowing them to dine free-of-charge. These gestures have touched the hearts of many Hong Kongers who have continued to support these stores amid challenging times.

However, "yellow" stores are not friendly to everyone. Some stores have openly displayed their political stance by putting up notices like the one in the photo below, which reads: "Starting from today, this eatery will only serve Hong Kongers. We will only take orders from Cantonese- and English-speaking customers. We will temporarily not attend to any customer who speaks Mandarin."

These notices understandably did not sit well with the mainland Chinese, who also openly expressed their displeasure on Weibo. In a post below, a netizen says: "After accepting the Hong Kong government's HK$200,000 subsidies (for eateries), instead of being grateful, the "yellow" shops said this was what the government owed them..."

It is not clear how long the restaurants that have announced closures will stay shuttered. The 2019 Hong Kong protests and Covid-19 pandemic have definitely greatly battered the F&B industry in Hong Kong. It will take some time for them to recover amid great uncertainty. But one thing is for sure ⁠— the precious food memories that they have given to their loyal customers will live on for a long time to come.

Related: Hong Kong and Covid-19: Resilience amid adversity | The Wuhan coronavirus outbreak and its possible effects on the Hong Kong economy