The Soong sisters — Ai-ling, Ching-ling and Mei-ling — born in Shanghai and educated in the US, are some of the most well-known personalities in Chinese modern history. All of them were supporters of the nationalist revolution; two of them went on to become the wives of revolutionary leaders Sun Yat-sen and Chiang Kai-shek, and political figures in their own right. Historical photo collector Hsu Chung-mao examines their impact through his collection of photos. 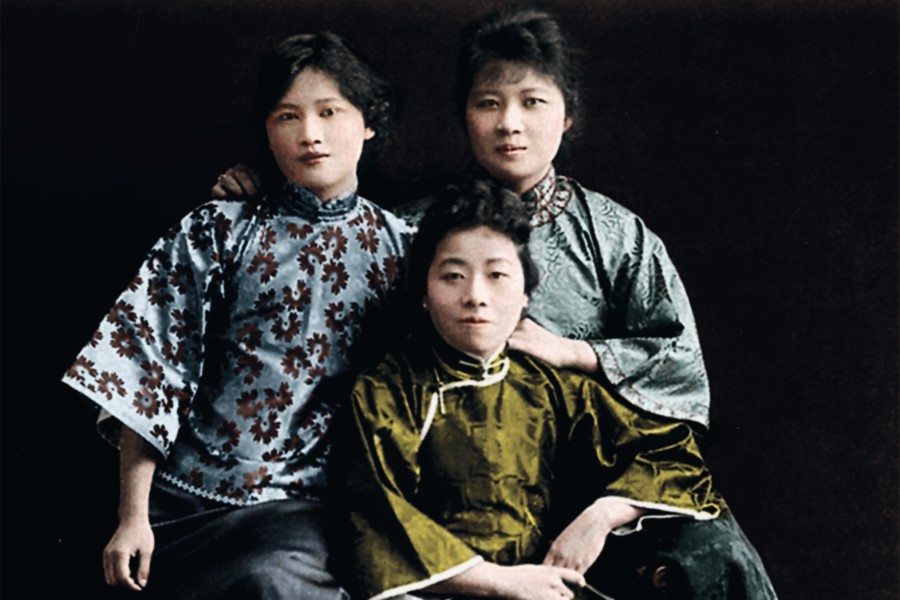 The Soong sisters on their return to China after graduating from college in the US. From left: Soong Ching-ling, Ai-ling, and Mei-ling. The Soong family was from Hainan island, and father Charlie Soong was a businessman who migrated to the US.

Candice Chan - 5 August 2022
China's "Foundation Plan" for iron ore has gained much official support, and is aimed at reducing reliance on foreign sources of iron, including Africa and Australia. The only way to do this effectively is for China to ramp up mining of its own iron resources. However, these resources are scattered and difficult to access, and of lower grade. This means China has its work cut out if it is to succeed.
Read more
Translated by Candice Chan on 29 March 2021

The Soong sisters are undoubtedly the most well-known and prominent sister trio in China’s modern history.

Their father Soong Chia-shu (宋嘉树) hailed from Wenchang city on Hainan island, Guangdong province. In his youth, he yearned for revolution. He migrated to Boston in the US, where he was influenced by revolutionary ideas. He was baptised as a Christian, taking the name Charles Jones Soong, and became popularly known as Charlie Soong.

Soong later returned to Shanghai as a missionary. He met Sun Yat-sen in 1894, and started funding the revolution. As a Hainanese and an overseas Chinese, Charlie Soong’s family was seen as a legend among the overseas Chinese community.

A marriage that a father did not approve of

Charlie Soong’s three daughters were all born in China, but he sent them to be educated in the US. In 1913, Sun Yat-sen was exiled in Tokyo, where he established the Chinese Revolutionary Party to oppose Yuan Shikai’s return to power. Soong sent his second daughter Ching-ling to Tokyo to be Sun’s secretary and to assist with daily chores and miscellaneous work, only for the two to fall in love, much to Soong’s fury when he found out.

He was dead set against the relationship, as he felt it was just hero worship by the young Ching-ling. Despite this, with the blessing of Japanese friends and the comrades of the Chinese Revolutionary Party, Sun Yat-sen and Ching-ling were married in Tokyo. Subsequently, Madame Sun Yat-sen (as she later became known) followed her husband back to Shanghai and then Guangzhou. She was by his side from the first National Congress of the Kuomintang (KMT), to cooperation with the Chinese Communist Party (CCP), the establishment of the Whampoa Military Academy, and then Sun’s journey north for peace talks, right up until his death.

As for youngest sister Mei-ling, she too had a strong love for her country and people, which was matched by political ambition as well. While in Guangzhou, Mei-ling got to know Chiang Kai-shek, then a political rookie with the KMT, and the two were quickly drawn to each other. However, Chiang already had a wife in his hometown of Fenghua in Zhejiang, plus other women in Guangzhou with whom he was intimate. Mei-ling wanted Chiang to first settle the legalities of becoming single again before talking about their marriage.

By September 1927, the National Revolutionary Army had united China’s southern provinces, and due to issues within the KMT, Chiang stepped down temporarily as commander in chief of the National Revolutionary Army. During this interim period, Chiang publicly announced his divorce from his first wife Mao Fumei, and he and Soong Mei-ling were married in Shanghai in early December. By this time, Sun Yat-sen had passed away, and Chiang with his military power was seen as a prominent future leader in the KMT, which made the wedding the talk of Shanghai.

Support from the sidelines

Eldest sister Soong Ai-ling was also once a secretary to Sun Yat-sen, and later married well-known Shanxi businessman and educator Kung Hsiang-hsi (H.H. Kung). After Sun’s return to China, she went with her husband to Shanxi.

From the start, all three sisters were supporters of the nationalist revolution. However, following the death of Sun Yat-sen and the KMT-CCP split, a rift began to show between the sisters.

As Chiang Kai-shek became the chairman of the Nationalist government, his wife Soong Mei-ling became the first lady of the Republic of China (ROC). But her sister Ching-ling sympathised with the CCP and felt that its ideas were what Sun Yat-sen would have wanted for the revolution. She was unhappy with Chiang’s autocratic ways, and used her personal influence to help the liberal intellectuals who criticised the Nationalist government.

Ching-ling’s public criticisms of Chiang Kai-shek were a major blow to his credibility, while helping his opponent the CCP. Records of private conversations between Chiang Kai-shek and the two Soong sisters, including intense debates on national issues, read like a gripping family saga, which in fact determined the direction of China’s modern history.

The KMT-CCP alliance during the Second Sino-Japanese War saw a reconciliation between Soong Ching-ling, Soong Mei-ling, and Chiang Kai-shek. The three Soong sisters participated in aid efforts for women and children, visited injured troops, sewed clothing, and made frequent appearances at publicity events.

In 1943, Soong Mei-ling visited the US, starting a wave of worldwide popularity for “Madame Chiang”, going down in history as a first lady of the ROC with beauty and brains.

Sisters across the Taiwan Strait

One year after the war ended, the KMT-CCP conflict began. The CCP won comprehensively in 1949, and established the People’s Republic of China (PRC), for which Soong Ching-ling expressed enthusiastic support — she was later invited to be vice chairperson of the PRC.

Soong Mei-ling went with her husband to Taiwan, and continued to be the first lady of the ROC. Soong Ai-ling migrated to the US, where she passed away in 1973.

Soong Ching-ling and Soong Mei-ling were separated by the Taiwan Strait; as the conflict between the KMT and CCP went on, they became strangers. In 1981, Ching-ling died of an illness in Beijing, while Mei-ling migrated to the US after the death of Chiang Kai-shek in 1975, to avoid hindering the authority of her stepson Chiang Ching-kuo in succeeding his father. Soong Mei-ling passed away in 2003 at the age of 105, the longest-lived Soong sister.

Even after over 50 years, people still talk about the story of the Soong sisters. It is not just about their personalities, but also about the status of the Soong family among overseas Chinese, and their influence on modern Chinese history. This combination of influence and personalities could only exist amid the twists and turns of their time, to be remembered for posterity.

Related: Soong Mei-ling and the flying tigers: When China and the US fought shoulder to shoulder | Sun Yat-sen’s lover Cuifen and her Malaysia villa | Chiang Kai-shek and the ‘President’s Fish’ at Sun Moon Lake