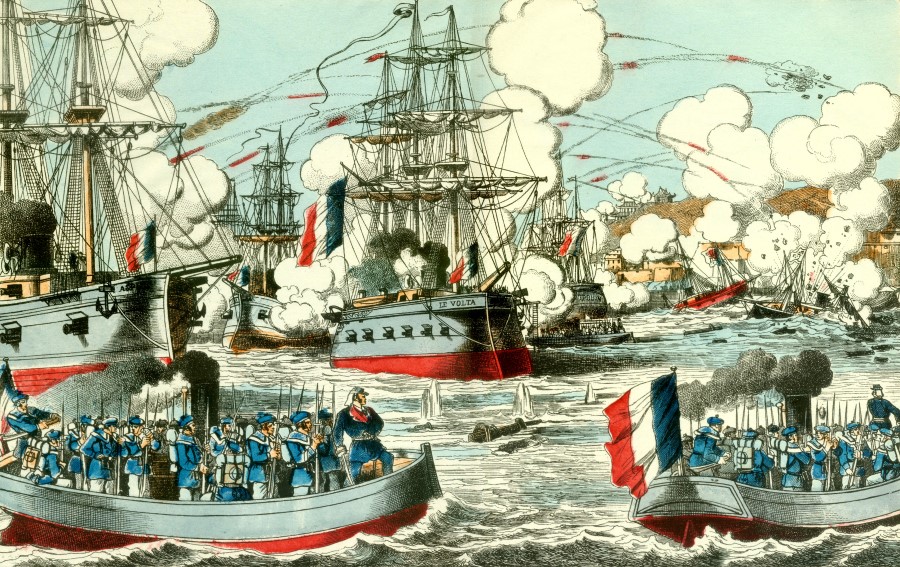 A colour illustration on 8 April 1884 shows the Battle of Fuzhou, with a shower of gunfire from French vessels and the Fujian Fleet either sinking or damaged.

Candice Chan - 11 August 2022
China’s Big Fund has come under scrutiny following a series of high-profile corruption investigations involving key persons in the chip industry. The CHIPS Act was also recently signed into law in the US to counter China, which makes things even more difficult for the sector. Zaobao correspondent Chen Jing speaks to industry experts to find out how the Big Fund can come out of this crisis.
Read more
Translated by Candice Chan on 20 August 2021

In the nine months from August 1884 to April 1885, a war on land and sea broke out between China and France. The battleground was on both sides of the Taiwan Strait — Fuzhou, Keelung, and Tamsui — while the largest land battle was fought in northern Vietnam.

China and France both suffered losses in this war, but the timid Qing court wanted to end the war quickly and gave in on its own, allowing France to expand its sphere of influence from southern Vietnam to include northern Vietnam. After Spain, the Netherlands, and Britain, France also established an Asian colony in Indochina, and continued the conflict in Asia following World War II.

After the Opium War of 1842 and the war against Britain and France in 1860, the attitude of the Western powers towards China went from admiration and respect to scorn. At the time, the power of capital due to the Industrial Revolution was growing rapidly, and imperialism and colonialism were at a peak. The powers had their eye on China as a vast, ancient Oriental land. British and French forces came by sea along China’s southeastern coast, while a rising Japan licked its chops. Russia stole large tracts of land from China on the pretext of claiming credit for mediation, and built the Chinese Eastern Railway, controlling the three northeast China provinces of Heilongjiang, Jilin, and Liaoning.

In the late 19th century, the situation changed in Europe. Otto von Bismarck, President of Prussia, managed to unite Germany and build a strong empire with his policy of “Blut und Eisen” (blood and iron). In 1870, during the Franco-Prussian War, the French lost heavily at the Battle of Sedan. Emperor Napoleon III was captured and the Second Empire collapsed, and the Third Republic ceded land as reparations as it bowed down to Germany.

At this time, the only thing that could make up for paying reparations and the loss of dignity was for France to expand its overseas colonies, and engage in armed extortion of weaker, smaller countries. This showed that even as France was losing its status in Europe, it did not rein in its military movements overseas, but grew reckless instead. The French navy was bent on sending troops to Tonkin or northern Vietnam, and even proposed venturing into China, reflecting the military’s eagerness to regain some ground.

As for China, 14 years of the Taiping Rebellion (1850-1864) had brought suffering to the people and shaken the foundation of Qing rule, while the rise of prominent generals like Zeng Guofan and Zuo Zongtang also drove reform. These generals steeped in the Confucian tradition were valiant fighters with modern perspectives. They saw clearly that China was lagging behind the rest of the world, not just in terms of weapons but also in knowledge, and if China was to recover, it would have to learn from others in order to beat them at their own game.

During the reign of the Tongzhi Emperor, there were signs of a renewal in China. On the suggestion of the aforementioned generals, China brought in modern schools and built a modern army and military factories, as well as telegraph and postal facilities. While these were not about the political and social reform that China needed the most in its modernisation, China did make obvious progress. In particular, the southeast coastal provinces had a long seafaring history and were familiar with maritime affairs, while returning overseas Chinese also brought back rich finances and fresh new ideas. When war broke out, the defences of these coastal provinces were far better than they were during the time of the Xianfeng Emperor.

Not a quick win as expected

In 1884, thinking that China would be an easy target, France declared war on China. However, apart from a victory in the Battle of Fuzhou through a sneak attack with superior arms, the French troops were repeatedly defeated on land, with losses in Keelung and Tamsui in Taiwan, as well as in the Battle of Bang Bo and in Lạng Sơn in north Vietnam. The fighting stretched on for nine months, during which French Admiral Amédée Courbet — commander of the Far East Squadron — fell ill and died in the Penghu (Pescadore) Islands.

From any angle, the French lost this war, with particularly heavy losses in land combat. French Prime Minister Jules Ferry lost his office amid heavy criticism. However, the Qing court was focused on peace and did not leverage its victory to rebuild the country and turn the momentum into domestic reform; on the contrary, it compromised and recognised Vietnam as a French colony.

Also, among all the Western colonial powers that went to war with China, France was not as strong as Britain, Russia, Germany, and even Japan, which rose later. During World War II, France was quickly occupied by Nazi Germany, and when the fighting broke out in the Pacific theatre, Japan quickly captured the French colony of Indochina. Of the five permanent members of the United Nations (UN) established after WWII (comprising the US, Russia, China, Britain, and France), France was the only country to be occupied on all fronts by the Axis powers, and was only considered a “victor” of WWII mostly due to US support.

WWII defeated the fascist Axis powers, and put an ethical end to colonialism. With the end of WWII, Asian people immediately shifted their target to Western colonialist countries Britain, the US, the Netherlands, and France. The US allowed the Philippines to be independent, while Britain also pulled out of its colonies in India, Malaya, Singapore, and Myanmar, after making arrangements to preserve its colonial interests. The Netherlands also pulled out of Indonesia after losing out in armed conflict. France took the toughest stance and deployed a large army to maintain its colonial interests in Southeast Asia. However, by then, Vietnam was no longer weak as it was before the war, and after communist China was established in 1949, it supplied weapons and troops to the Viet Minh in its resistance against France.

By this time, France was no longer dealing with poor, weak Asians as before the war, but highly organised Vietnamese armed forces that had been through WWII. Following fierce fighting and reinforcements on both sides, in May 1954 the French army lost badly in Dien Bien Phu and surrendered unconditionally, ending nearly 70 years of colonial rule in Asia. This victory was mainly due to the strong resolve of Asian people to do away with Western colonial rule — this general sentiment was seen by the West as an “invasion of the Communist Party”, while underestimating its historical background, resulting in the US making the same mistakes as France in Vietnam during the 1960s.

Related: The Opium Wars: When China’s ‘century of shame’ began | [Picture story] The Boxer Rebellion: A wound in China’s modern history | From ‘sick man’ to ‘sleeping lion’: Have the Chinese overreacted?