The Boxer Rebellion at the turn of the 20th century goes down in history as proof that if the Chinese are weak, the West will take advantage and China will pay the price. It is a constant reminder to the Chinese of their past humiliations and guides their dealings with the West today. Historical photo collector Hsu Chung-mao shares illustrations of the tumultuous times during that period. 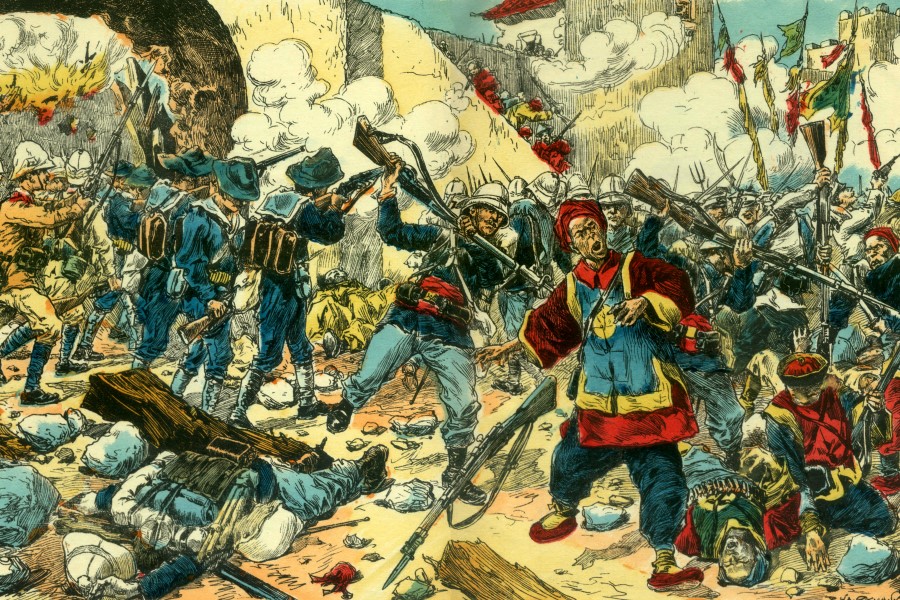 Candice Chan - 25 January 2023
While the Americans have made noticeable progress in their “pivot” to Asia, the crux of successful regional engagement rests on Washington’s ability to work with and around China’s indisputable links and influence in this part of the world, while managing its own relationship with Beijing.
Read more
Translated by Candice Chan on 22 June 2021

The group that came to be known as the Boxers (义和团, Yihetuan, lit. Group of Righteousness and Harmony) originated from local militia groups during the reigns of the Xianfeng and Tongzhi emperors. To protect their home and property, these people practised a type of martial arts known as yihequan (义和拳, literally fists of righteousness and harmony), which led to their name.

In 1887, a dispute involving Christian missionaries arose in Shandong, leading to a wave of xenophobia, and the Boxers evolved into an anti-Christian body. Their ideas came from novels such as Investiture of the Gods (《封神榜》), Journey to the West (《西游记》), and Romance of the Three Kingdoms (《三国演义》), while the gods and deities they believed in were characters in supernatural or martial arts/wuxia novels.

In 1895, during the First Sino-Japanese War, the Qing empire was defeated by Japan, its little neighbour to the east. This sent shock waves through the intellectuals in China, who realised that China’s modernisation could not be limited to building new factories and weapons. There had to be a fundamental reform within the political, military, and education systems.

So, in 1898, the young Guangxu emperor brought together a group of intellectuals to drive the reform of the country’s systems. However, this stoked resistance among the old-timers at court. They went to the Empress Dowager Cixi — who in fact held full administrative powers — and accused the reformists of plotting to overthrow Qing rule. Cixi accepted what they said and put Guangxu under house arrest, and had the reformist leaders killed, ending what came to be known as the Hundred Days’ Reform.

The Western powers supported Guangxu’s reformists and secretly protected them, arousing Cixi’s hatred of Westerners, so that she seized any opportunity for revenge. Yu Xian, the governor of Shandong at the time, figured out Cixi’s concerns and secretly encouraged the Boxers to adopt the slogan “Support Qing, Destroy the West” (扶清灭洋), and reject churchgoing Christians.

The Boxers consolidate their power

Ambassadors of various countries put pressure on the Qing court, and Yu Xian was transferred to Beijing. His replacement as Shandong governor was Yuan Shikai, who suppressed the Boxers, so that they gradually shifted their activities to the old Zhili province — a region around today's Hebei, Henan and part of Shandong — which was directly administered by Beijing.

Yu Lu, the viceroy of Zhili, was initially against the Boxers, but changed his attitude when he noticed Cixi’s ambiguity. In line with her intentions, he summoned the Boxer leaders and received them with the highest courtesies, and recommended to the court that the Boxers could be of use.

The Boxers started to act without restraint in the area around Zhuozhou and Baoding — wrecking railways, damaging power lines, and killing missionaries and Christians. Officials and military authorities could not stop them, and the situation worsened. Cixi believed the words of sycophants and thought the Boxers were sent by heaven to help China destroy Westerners. She secretly summoned the Boxers to enter Beijing; within about ten days, there were 100,000 of them. On their flags were written slogans such as “Support Qing, Destroy the West” (扶清滅洋), “Doing Justice for Heaven” (替天行道), and “Sacred Fists of Righteousness and Harmony” (义和神拳).

Cixi summoned and met the Boxer leaders, and rewarded them. The elites immediately took her lead. Meeting areas for Boxers sprang up in various temples and residential buildings, and the Boxers were given the authority to move freely in and out of the palace, recklessly killing and sacking, sending Beijing into chaos.

On 11 June 1900, the killing of Sugiyama Akira, counsellor of the Japanese legation, escalated the situation. Cixi held several meetings discussing the situation, but on 20 June, the pro-war camp also had German plenipotentiary Clemens August von Ketteler killed. Cixi had no choice but to officially declare war against foreign colonising powers.

Lesson from the Boxer Rebellion

At this time, the armies of the various powers had already won the Battle of the Taku/Dagu Forts and also captured Tianjin. However, there was much distrust among them which resulted in a delay in sending troops into Beijing. On 14 August 1900, the Eight-Nation Alliance — Russia, Germany, France, Britain, the US, Japan, Italy, and Austria-Hungary — began to attack Beijing. Cixi and Guangxu fled to Taiyuan, eventually reaching Xi’an.

When the Alliance troops entered Beijing, they pillaged and looted, and arrested and executed the Qing officials and Boxer leaders involved in the incidents, in the name of punishing the guilty. On 7 September 1901, the Boxer Protocol was signed. The Qing court had to pay huge indemnities, and was forced to allow foreign powers to station troops in Beijing, in a loss of sovereignty.

What China saw was the Western powers grabbing China’s land and resources, and the Western church seducing the Chinese people to abandon their previous religious beliefs and relegating Chinese temples to idol worship, while also grabbing land from farmers.

The Boxer Rebellion had a deep and lasting impact on the Chinese people. It turned China from being proud and confident to being fearful and servile towards foreign countries, while the Qing court lost its legitimacy of government, and a new wave of reformist thinking arose.

The incident stunned China and the world. However, while it had a major impact on China and the West, it meant different things to each side. What the West saw was China’s barbaric people attacking the Western church for no reason, killing religious persons and Chinese Christians, as well as Western envoys. What China saw was the Western powers grabbing China’s land and resources, and the Western church seducing the Chinese people to abandon their previous religious beliefs and relegating Chinese temples to idol worship, while also grabbing land from farmers. And so, the Boxer Rebellion was an instinctive reaction by the Chinese against this violation by the Western powers.

The Boxer Rebellion was a deep wound in China’s modern history, and it came to symbolise a certain spirit, taking on different significance at different times — the resolve of the Chinese to defend their national sovereignty and hit back at bullying by various powers, as well as the consequences of ignorance due to irrational xenophobia and the rejection of science, which would only lead to the country becoming more backward and unable to stand up to imperialist invasion.

Another major question is how much China has to learn from the West in order to reform and strengthen itself. Sun Yat-sen pushed for a Western-style election and representation system, to which the West was sympathetic. But that did not mean the West was going to let go of the resources and benefits it had seized through military means. So, having the same values as the West will not give China an equal international position; only overall national strength can do that.

In short, each time the Western world exerts pressure on China, the Chinese people are reminded of the unhappiness and anger associated with the Boxer Rebellion.

Related: [Photo story] The Korean War: The first large-scale war between China and the US | Why were Chinese imperial families prone to fratricides and tragedies? | [Photo story] Russo-Japanese War: A war fought on Chinese soil and its hard lessons | A century later, China has closed its doors to Western humanism