Off with the rabbit’s head!

How would you feel if rows of rabbit teeth and sunken eyes stared at you on a plate? Food writer Tzu-i devours one like a pro in Sichuan. 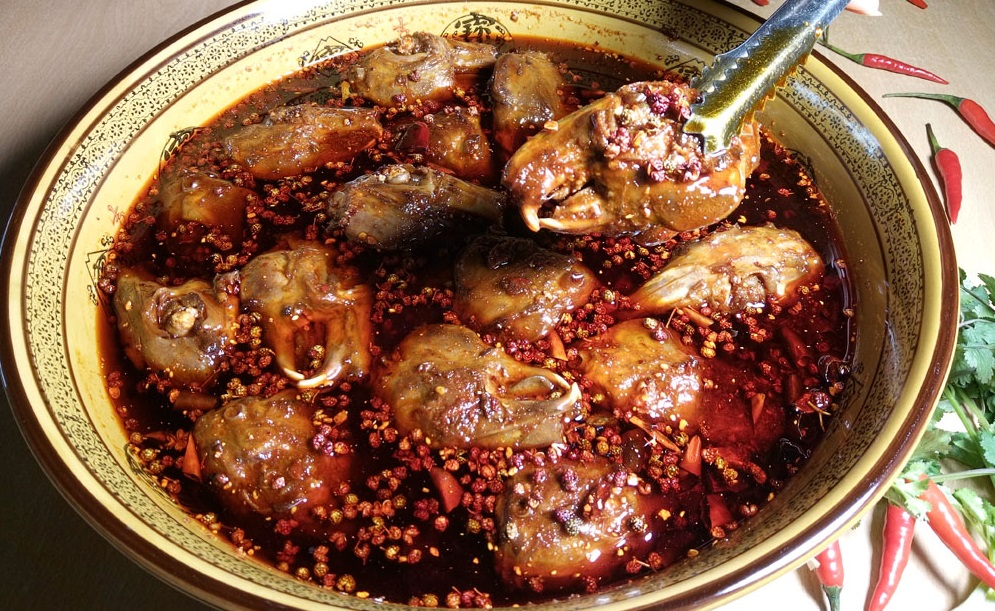 The rabbit head is the epitome of “compound flavours” — the Sichuan people consume on average 300 million rabbit heads a year. (Internet)

Grace Chong - 1 December 2022
US academic Zhu Zhiqun gives an assessment of the late former President Jiang Zemin’s policies during his time leading China throughout the 1990s and into the early 2000s.
Read more
Translated by Grace Chong on 8 November 2019

As someone who has been living in Chengdu for over two years, I’m ashamed to admit that until yesterday, I’d never tried munching on a rabbit head.

In Fuchsia Dunlop’s Shark's Fin and Sichuan Pepper: A Sweet-Sour Memoir of Eating in China, she recounted that when she had just arrived in Sichuan, she “steered away from the wilder waters of Chinese cuisine” and would “always choose flesh over offal”. However, as the days went by, she grew to be more accustomed to exotic dishes like loaches, bullfrogs, pig brains etc. Her ultimate challenge was the rabbit head — she had her first bite one day while drunk, and never looked back.

I didn’t flinch at the sight of eight fist-sized skulls on the table in front of me, each generously coated with chilli and crushed peanuts. I stared right at the rows of buck teeth and sunken eyes and thought: it wasn’t that bad!

The world’s premier Sichuan pepper expert, Tsai Minghsiung, who is a Taiwan-native like myself, told me that it took him almost three years of living in Sichuan to overcome the psychological barrier of sinking his teeth into a rabbit’s head. And when he finally did, he discovered that it was popular for a reason.

Perhaps because I was entering my third year in Chengdu and was under the influence of alcohol like Fuschia Dunlop: I didn’t flinch at the sight of eight fist-sized skulls on the table in front of me, each generously coated with chilli and crushed peanuts. I stared right at the rows of buck teeth and sunken eyes and thought: it wasn’t that bad! I only wanted to have some beancurd and seaweed initially, but when my friend went on and on about how extraordinary the rabbit heads in this restaurant were, how “they justify the outrageous cost of 12 RMB per piece”, I was persuaded. The stars aligned and I was to eat rabbit heads that fateful day.

Sichuan cuisine is well known for its emphasis on different tastes and textures, and the rabbit head fulfils these hallmarks to a T.

I put on some gloves and was ready. My friend taught me to begin by tearing the top and bottom jaw apart, eat the tongue first, and then tackle the cheeks. After that, munch on the upper jaw, eyes, and brain. The entire process was easier than I thought, possibly due to the many hours it spent simmering in a stew — the meat fell off the bones with minimal pressure. Also, the bone structure of the rabbit’s head is quite peculiar and different from the chickens’ and the ducks’. It tore open effortlessly, as if you were disassembling a lego set.

Sichuan cuisine is well known for its emphasis on different tastes and textures, and the rabbit head fulfils these hallmarks to a T. The rabbit head I ate had smoky and piquant flavours. You’re immediately hit by its mala (numbing and spicy) flavour once it’s in your mouth. Then, a hint of sweetness adds to the saltiness before you finally savour the aftertaste of the master stock. The texture of the rabbit head is multi-dimensional as well: the rabbit cheek is tender, tongue firm and chewy, upper jaw crunchy, and its brain, soft and creamy. I dug the eyes out for my friends, and they said it was wonderfully gelatinous. The rabbit head may be small, but its flavours and textures are just the opposite. It is the epitome of “compound flavours” — no wonder the Sichuan people are its die-hard fans, consuming on average 300 million rabbit heads a year.

The eating “from head to tail” adheres to the current ethos of sustainability and waste reduction.

As for me, I took rabbit-head eating very seriously, making a mental note of all the senses that were stimulated during the process, then checked the task off my to-do list. But to think about it, rabbits can be produced sustainably; they grow fast on a vegetable diet and do not require growth hormone or antibiotics. The breeding produces minimal pollution. The eating “from head to tail” adheres to the current ethos of sustainability and waste reduction. All in all, it is more eco-friendly than eating animals at the top of the food chain or eating those bred in highly industrialised manners like chickens, pigs, and cows. Thinking of it this way, I am quite at peace with eating the rabbit head, and who knows if a craving may strike again someday!