The Russia-Ukraine war: Parallels and lessons for Vietnam

Vietnam’s nuanced approach to the Russia-Ukraine war and its refusal to single out Russia’s invasion suggest introspection in Hanoi over its foreign and defence policy calculations. Vietnam is well aware that a smaller state living next to a giant neighbour should not become a battlefield of great power conflict or depend on others for its survival. Learning from the experience of Ukraine, will it be able to strike a balance in its hedging between Washington and Beijing? 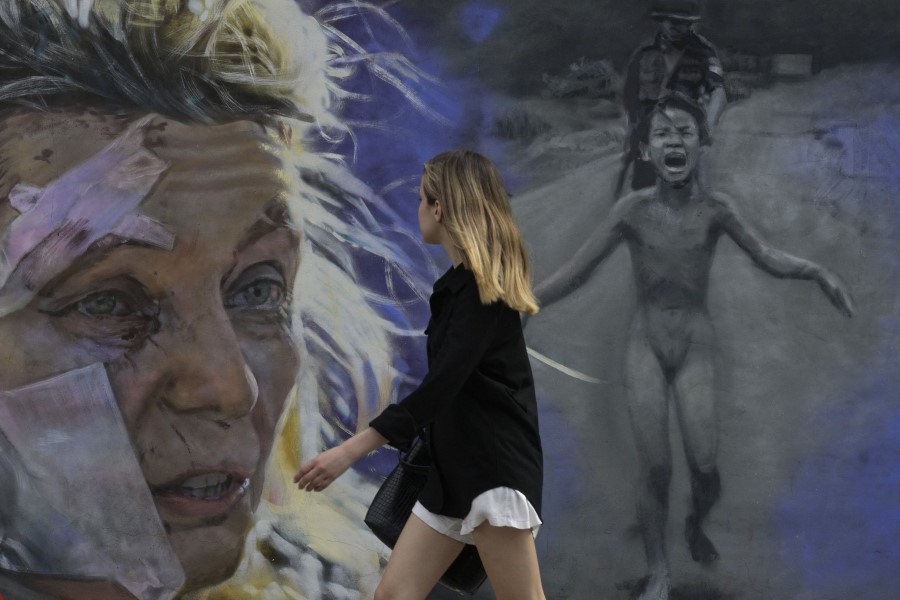 A woman walks pass the mural "No to war" by muralist Maximiliano Bagnasco in Buenos Aires on 5 March 2022. The mural is inspired by two war photographs from Ukraine and Vietnam. (Juan Mabromata/AFP)

Candice Chan - 23 November 2022
Zaobao journalist Miao Zong-Han takes a closer look at voter fatigue in Taiwan in the upcoming “nine-in-one” elections, caused mostly by the arguing over plagiarism allegations, which might interest the highly educated but bore the average voter. Another question is whether the atmosphere at these elections will be a good indicator of things to come in the 2024 general election.
Read more
Translated by Candice Chan on 15 March 2022

As the Russia-Ukraine war grinds on and casualties mount, the ramifications are being hotly debated among the Vietnamese. The crisis even featured at a caucus of Vietnam’s top leadership on 10 March. It presented a hard choice for Hanoi between preserving the fundamental principle of respect for a sovereign nation’s independence and territorial integrity and maintaining its good relations with Russia — a key arms supplier and a major oil and gas exploration partner in the South China Sea. The crisis also sparked deep soul-searching among the Vietnamese on the lessons that Hanoi should learn from the foreign policy choices of Ukraine.

Much has been said about drawing parallels between Russia’s invasion of Ukraine and China’s possible escalation of its forceful posture in territorial disputes with neighbouring countries. The fear that China could take a leaf from Russia’s playbook by using manufactured histories and flouting international law in the South China Sea is not far from Vietnamese minds. In fact, driven by this underlying concern, Vietnam has implicitly criticised Moscow’s actions as being not in line with the principles of the United Nations Charter although it stopped short of naming Russia in its official statements.

A more important parallel between Ukraine and Vietnam is that both countries lie in the immediate periphery of great powers. Their respective neighbourhoods are vulnerable to power politics and security dilemmas. Both have and will continue to be primary objects in great powers’ tussle for spheres of influence. At the heart of their national existence is the precarious line between preserving their strategic autonomy and being sensitive towards their larger neighbours’ security concerns vis-à-vis other peer adversaries.

Similar to Russia, China has been leveraging all means of its statecraft towards neighbouring countries and developing its anti-access/area denial (A2/AD) capabilities to deny power projection of distant adversaries, particularly the US, in its own neighbourhood.

Russia and China, in their 4 February 2022 joint statement — just days before the Russian assault on Ukraine — evoked the notion of "indivisible security" to protest against NATO’s expansion to Russia’s immediate periphery. They vowed that both countries would "stand against attempts by external forces to undermine security and stability in their common adjacent regions".

Similar to Russia, China has been leveraging all means of its statecraft towards neighbouring countries and developing its anti-access/area denial (A2/AD) capabilities to deny power projection of distant adversaries, particularly the US, in its own neighbourhood. As noted by Brantly Womack: "China has nothing to fear from Vietnam except in combination with other powers, and thus its perspective was rooted in general strategic concerns."

The war in Ukraine has brought back memories of a dark chapter in Vietnam’s history in the 1980s. Then, Hanoi’s policy to bandwagon with the Soviet Union and its prolonged occupation of Cambodia brought disastrous strategic outcomes for the country, especially hostile relationships with Beijing and ASEAN countries, sustained international isolation and economic ruin. A decade before that, US abandonment had left South Vietnam helpless in their battle against China over the Paracel Islands. The idiom "distant water will not quench the fire nearby" has since been embedded in Vietnam’s strategic parlance.

Judging from the US and its NATO allies’ opposition to Russia and support for Ukraine, will Vietnam be more confident in or more doubtful about Washington as a security guarantor in the Indo-Pacific?

Many Vietnamese allude to the hard lesson from their own traumatic past: a smaller state living next to a giant neighbour should avoid becoming a battlefield of great power conflict. In addition, Vietnam should not count on external help to secure its own survival. For many Vietnamese, the Ukraine crisis has a profound bearing to the country today. Some Vietnamese conservative ideologues have expressed misgivings about the West’s courtship of liberal-minded Ukrainian elites who had looked only to the West for their country’s security and future.

As alluded by the recent speech of Vietnam’s envoy to the United Nations: "For a number of times, our nation’s own history of enduring wars has shown that too often wars and conflicts until today stem from obsolete doctrines of power politics, the ambition of domination and the imposition of the use of force in settling international disputes." Nguyen Chi Vinh, a former deputy defence minister and a prominent strategic thinker of Vietnam, was more explicit: "We should tell our Ukrainian friends that it is ill-advised to allow their country to become an arena of power politics, to rely on military power to confront your giant neighbour, and to take sides in great power rivalry."

Vinh’s take on the Ukraine crisis is also instructive for observers seeking to read the tea leaves of how Hanoi could weigh the order of its priorities in Vietnam’s external security relations. He reaffirmed the "Three Nos" policy — no military alliances, no aligning with one country against another and no foreign military bases — as fundamental to Vietnam’s independent foreign policy. The 2019 Vietnam National Defence White Paper, however, also contained a new provision that says that subject to specific conditions, Vietnam will develop "necessary, appropriate defence and military relations with other countries" in furthering its security interests.

Granted, there is an inherent tension between the former and the latter. But this Three Nos-plus formula is also seen as striking a fine balance between Hanoi’s security guarantees towards Beijing and its pursuit of military ties with the US and other like-minded countries to counter-balance China’s advances in the South China Sea. In fact, Hanoi — alongside Singapore and the Philippines — is considered among the most forward-leaning Southeast Asian states in terms of supporting American military access and presence in Asia.

There is a limit to the strategic like-mindedness between Hanoi and Washington when it comes to hard balancing against China.

In light of the Ukraine crisis, will Hanoi invest substantially in its budding military ties with Washington or will it become more deferential to Beijing’s sensitivities? The Biden administration considers Vietnam a priority security partner in its Indo-Pacific strategy and seeks to promote bilateral relations to a strategic partnership. Will Hanoi jump on the American bandwagon? Judging from the US and its NATO allies’ opposition to Russia and support for Ukraine, will Vietnam be more confident in or more doubtful about Washington as a security guarantor in the Indo-Pacific?

Vietnam’s nuanced approach to the Russia-Ukraine war suggests that Hanoi will continue to be risk-averse in its hedging between Washington and Beijing. This should provide some circumspection to those who are betting on the steady and upward trajectory of US-Vietnam strategic congruence vis-à-vis China. There is a limit to the strategic like-mindedness between Hanoi and Washington when it comes to hard balancing against China. As remarked by Robert Sutter: "American policymakers should be mindful that Vietnam continues to grope its way in China’s long shadow."

Related: Russian invasion of Ukraine poses geopolitical quandaries for Vietnam | Ukraine war: Southeast Asian responses and why the conflict matters to the region | Why ASEAN must stand firm against Russia's invasion of Ukraine | From real war to online war: Small states need smarter skills to survive a multipolar internet age