What made Hong Kongers stand with the rioters during the recent district council elections? Does this landslide victory for the pro-democracy camp really count as a win for Hong Kong? How will Beijing react? Veteran China affairs journalist and associate editor of Zaobao Han Yong Hong gives her opinion. 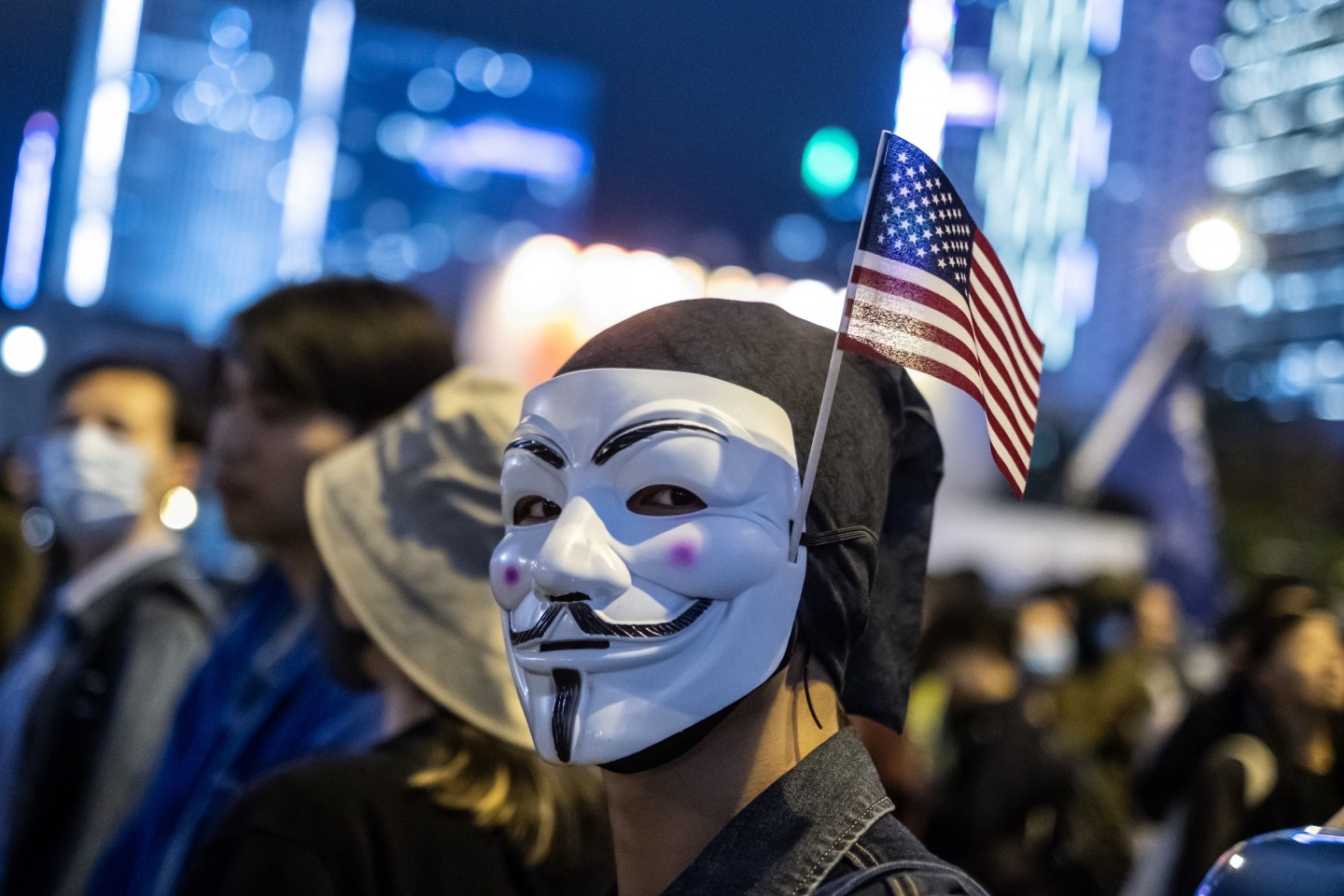 A demonstrator wears an anonymous mask, also known as a Guy Fawkes mask, and an American flag during the "Thanksgiving Day Assembly for Hong Kong Human Rights and Democracy Act" at Edinburgh Place in the Central district of Hong Kong, China, on Thursday, Nov. 28, 2019. (Justin Chin/Bloomberg) Grace Chong - 3 June 2020
Zaobao's Beijing correspondent Yang Danxu often marvels at the spending power of Chinese white-collar workers around her, and she too was surprised when Chinese Premier Li Keqiang remarked that China has 600 million people with a monthly income of 1,000 RMB. That is more than 40% of the Chinese population, and the figures portray a reality that is starkly different from common perception. Are Chinese people moving up the income ladder and are their lives becoming better as is the common refrain? Yang examines the facts.
Read more
Translated by Grace Chong on 29 November 2019

US President Donald Trump has officially signed the Human Rights and Democracy Act. Following unanimous support from the Senate and the House of Representatives, it was only a matter of time before Trump signed the bill. Yet, when the White House announced that the bill has been signed into law on Wednesday (27 Nov), it still created a commotion.

The Human Rights and Democracy Act authorises the US government to impose sanctions, including asset freezes and visa bans against officials who abuse human rights in Hong Kong. It also requires an annual review to assess if Hong Kong has sufficient autonomy to justify its special treatment from the US. Clearly, the US government is interfering in Hong Kong’s internal affairs.

The US has much to gain from the Hong Kong market and great losses would be incurred should Hong Kong’s status as a separate customs zone be annulled. However, the possibility of an annulment remains present if China-US relations worsen to the point of economic decoupling. In other words, Hong Kong’s future remains a great uncertainty. Although the US government has the ability to impose sanctions on those who abuse human rights and freedom, this right is more symbolic than it is literal. Nonetheless, the psychological pressure it has on Hong Kong officials who govern and enforce law is not to be underestimated.

When the Act became official, Joshua Wong, secretary-general of the Demosistō, expressed yesterday (28 Nov) that he would continue to fight for more international support that imposes sanctions on Hong Kong officials. Wong unapologetically expressed that the Demosistō will collate opinions and come up with a suggested list of officials, policemen, and returning officers who could have violated the Act, and Demosistō's party members based in Washington will also continue calling for the tough implementation of the Act. While Wong is determined to use the US government to put more pressure on the Hong Kong government, the entire Hong Kong society could be implicated as well.

Hong Kong remains a part of China regardless of the level of elections and its outcome. It is impossible for the opposition party to seize power. Yet, the series of events could be a rude awakening to Beijing, forcing them to consider if Hong Kong is indeed part of China.

These signs — the never-ending social unrest in Hong Kong; external and internal promotion of the Human Rights and Democracy Act; and the pro-Beijing camp’s landslide loss at the district council elections held on 24 November — direct us to this jarring question once again: who rules Hong Kong?

At the district council elections held on 24 November, the pro-democracy camp won 393 out of 452 seats, more than double from the last elections. Chinese media either avoided reporting the results or simply forgo its report. Few commentaries spoke of the significance of the results or simply described the Hong Kong society as being “emotional”.

Undoubtedly, as a matter of jurisprudence, Hong Kong remains a part of China regardless of the level of elections and its outcome. It is impossible for the opposition party to seize power. Yet, the series of events could be a rude awakening to Beijing, forcing them to consider if Hong Kong is indeed part of China. Recently, comments about the necessity of a “second handover” of Hong Kong has drawn attention in Chinese public opinion. The need for a “second return” implies that Hong Kong’s regime has not entirely returned, and it is important to have an objective understanding of this.

The continuation of Hong Kong’s extradition bill protests reveals a naked truth: Western powers and financial influence have always been present in Hong Kong, whether it was before or after Hong Kong’s handover. To the Hong Kongers, “two systems” takes precedence over “one country”. Undeniably, the pro-Beijing camp still gained 40% of the votes in the historical 24 November district council elections, justifying their stance that there is a stable nationalism in Hong Kong, albeit a gradual weakening.

Notably, although daily life has been hindered due to the destruction of transport infrastructure, Hong Kongers do not blame the rioters for it. They instead blame the Hong Kong government, and even Beijing.

However, was “violence” one of the factors that contributed to the district council elections result? Objectively speaking, violence did indeed contribute to uniting the people in times of societal dissatisfaction and fueled feelings of resentment.

Ever since the 2014 Occupy Central movement, Hong Kongers have first overcome psychological barriers to “speak up with blatant disregard of the law”. Then, in the extradition bill protests this year, society has shown great tolerance for violence and destruction — the slogan “There are no rioters, only tyranny” clearly legitimises the destructive behaviours of Hong Kongers. Notably, although daily life has been hindered due to the destruction of transport infrastructure, Hong Kongers do not blame the rioters for it. They instead blame the Hong Kong government, and even Beijing. This deeply entrenched logic of the Hong Kongers is what made them stand with the rioters during the elections, exemplifying great approval and support for the rioters’ intentions.

Thus, when it was announced that the pro-Beijing camp suffered enormous losses in the early morning of 25 November, Hong Kong correspondents of Lianhe Zaobao lamented, “Hong Kong achieved a short-term win, but suffered a long-term loss.”

Beijing will never accept the fact that it will have to govern Hong Kong with the international community, but there seems to be no clear solution to Hong Kong’s current predicament.

The district council elections is the climax of the months-long protests that strengthened the capabilities and confidence of the pro-democracy camp, the “valiant”, and supporters of the “peaceful, rational, non-violent” camp in their battle against the central government. Result of the district council elections is further proof of the legitimacy of violence that could even work in favour of garnering opposition votes. It is apparent that the Hong Kong protests will continue.

In the meantime, the pro-democracy camp could already be preparing to crown a new “king” at the 2021 Hong Kong Chief Executive election. Beijing will never accept the fact that it will have to govern Hong Kong with the international community, but there seems to be no clear solution to Hong Kong’s current predicament. The central government has its work cut out: advance the opening up of mainland cities like Shenzhen; reduce its reliance on Hong Kong as a financial centre; fuel reforms; improve the way Hong Kong perceives them; and re-evaluate and rectify the existing governance mechanisms and personnel of Hong Kong. What remains predictable is a Hong Kong economy under pressure and a society laden with periodic outbursts of protests. Hong Kong remains in turmoil.

Politics
Is China the 'big bad wolf' the US has made it out to be?

Politics
How could democracy yield a leader like Trump?