Singapore and Suzhou: Where will this journey lead us?

In 1994, Singapore and China embarked on the Suzhou Industrial Park project. How has Suzhou progressed since then? What lies behind the city’s recent announcement of a “revival” of its opening up journey? What do these spell for Singapore-China relationship? SPH Chinese Media Group head Lee Huay Leng shares her thoughts after attending the Further Opening-up Conference in Suzhou. 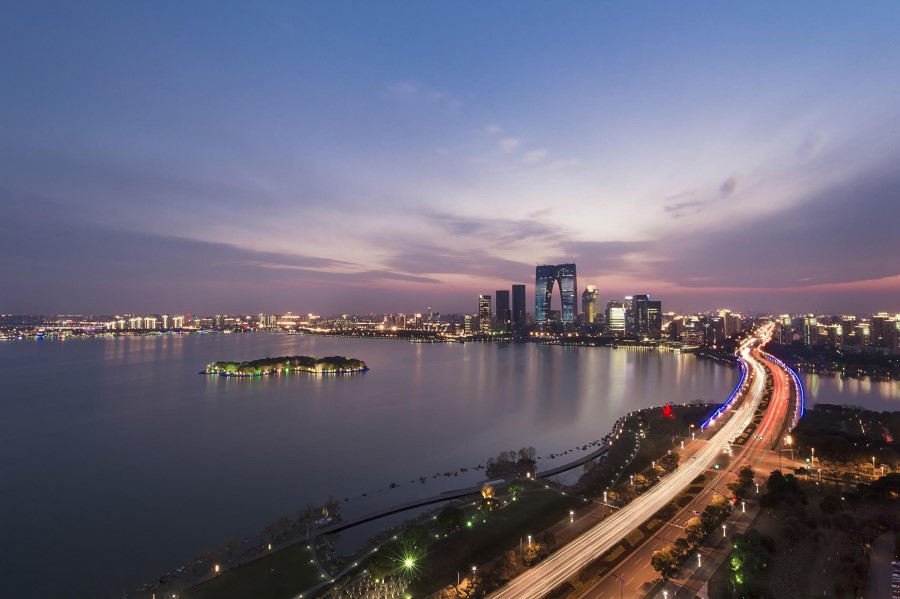 The Suzhou Industrial Park has seen great development since it was started in 1994. (SIP Administrative Committee)

Candice Chan - 18 May 2022
The Chinese government has recently announced plans to establish a unified national market that is highly efficient, standardised, open and competitive. It would break down walls, raise the standards of the business environment within China and act as a buffer against external pressures. While the intention is good, NUS academic Lu Xi points to possible drawbacks and challenges.
Read more
Translated by Candice Chan on 20 January 2020

On 3 January 2020, the Suzhou Municipal Committee and the Suzhou Municipal People’s Government held the Conference on Further Opening-up in Suzhou at the Jinji Lake International Convention Center. The conference theme in Chinese, "开放再出发", means reviving the process of opening up. The 3,000 attendees included representatives of foreign offices stationed in Shanghai, foreign and Chinese entrepreneurs, foreign media, heads of the local court and Prosecutor General’s Office, and ministry officials. The event was also broadcast live in various cities and regions.

I found out from a Suzhou official that this was the first time in recent years that Suzhou had held a conference on such a grand scale. The scripts and materials provided by the publicity department were in both Chinese and English, and there was also live simultaneous interpretation. Suzhou is a prefectural-level city of Jiangsu province — to make such a high-profile declaration of a “revival” shows that the audience of the conference was not confined to Suzhou.

So, how can we read this conference?

Amid the China-US trade war, Suzhou, whose trade with the US makes up one-eighth of China’s trade and two-thirds of Jiangsu’s trade, is facing a stiff test. There is an impetus to hold the conference now and seek a breakthrough with a revival.

At the same time, amid the current wave of anti-globalisation, Chinese president Xi Jinping is advocating cooperation and opening up, and has emphasised several times that China will only open its doors wider. Suzhou's high-profile assertion at this time to "focus on growth in harmony with the world", and "to keep in step, stay determined, and to put its mind in doing what it does best, that is to revive its process of opening up", can be seen as one of China’s signals to the world.

Suzhou intends to “fight for its place”. It has its sights set on a global coordinate system, and is benchmarking itself against international norms and standards.

At the conference, Suzhou party secretary Lan Shaomin stoutly read his 20-page speech in which he announced 30 policy measures, including bringing in 10,000 high-calibre talents within three years, comprising at least 50% foreigners and 2,500 foreign experts.

Among the many new measures, is the call to improve business environment or "Suzhou makes it easy", which comes with the English slogan: “4S: Supreme Service, Super Suzhou”. Lan’s speech clearly carried an undertone of competitiveness. Suzhou intends to “fight for its place”. It has its sights set on a global coordinate system, and is benchmarking itself against international norms and standards.

Suzhou is looking determined and dynamic. Lan’s speech was peppered with references to Chinese Communist Party (CCP) General Secretary Xi Jinping’s concept of “socialism with Chinese characteristics”. CCP's propaganda on its beliefs was imbued with the tactics of market economy and the creativity of an advertising copy.

Given the government-level collaboration on the Suzhou Industrial Park (SIP) in 1994, one might say that Singapore has a unique familiarity with Suzhou. Mr Lan took office in September 2019 and visited Singapore in December. Just before the conference's commencement on 3 January, he mingled with a selected group of participants, which included quite a few Singaporeans.

Sitting in the audience, as a veteran journalist who accompanied founding prime minister Lee Kuan Yew when he visited Suzhou over 20 years ago, I pondered on the connection between this conference and the 30 years of Singapore-China diplomatic relations we’re marking this year. How would Singapore see Suzhou’s revival?

In the 30 years since the official establishment of diplomatic ties, SIP has been a landmark project. Being a G-to-G venture, the Chinese central government came up with its policies for SIP, to help boost Suzhou’s overall development.

Suzhou’s regional GDP in 1994 was about 72 billion RMB. This figure more than doubled to 154 billion RMB in 2000, went past the 1 trillion RMB mark in 2011, and hit 1.93 trillion RMB in 2019. It was only trailing direct municipalities and special economic zones such as Shenzhen and Guangzhou. Suzhou considers the SIP one of its three “secret weapons”, as described in a commemorative book released at the end of 2019. The book title《再燃激情——苏州“三大法宝”》 translates to Reigniting Passion - Suzhou’s Three “Secret Weapons”, and tells the SIP story with Suzhou’s unique characteristics thrown in.

“Imagination, determination, industrious people has made SIP a success. What Suzhou can do all China also can.” - Mr Lee Kuan Yew

Singapore does not trumpet what it does. By participating in the 70-square kilometre development project described by then-Chinese president Jiang Zemin as the “very top priority”, Singapore quietly left its mark on Suzhou’s early opening up. And even though Suzhou is only a part of the whole, Singapore did get a close-up look at how the city had changed in the context of China’s overall reform and opening up.

But behind all the figures lies the process. Suzhou has been learning, and Singapore must also have achieved something. Looking back at China’s development, I see vision, foresight, and broad-mindedness in Singapore’s “software transfer” to help Suzhou create a conducive business environment. Over time, it might be easy to think that Singapore participated in building the SIP purely out of business considerations, to allow China-Singapore collaborations to get listed — that would be wrong. Mr Lee Kuan Yew’s inscription for the SIP on its tenth anniversary in 2004 read: “Imagination, determination, industrious people has made SIP a success. What Suzhou can do all China also can.”

Former Chinese vice premier Li Lanqing, who was then in charge of the project, told Lee at the time: “Everything has to be put through the test of time. Only after some time will the results be shown.” At the conference, Li also mentioned that only looking at immediate benefits is to have a small-picture mindset.

The effort put into developing the SIP at the time is now just a moment in Suzhou’s opening up. Now that Suzhou has confidently declared its revival, Singapore should congratulate it. But the question is: in a different time, would Singapore-China relations also see a revival, and how?

Even as Singapore-China relations continue to develop with the times, the open-mindedness and wisdom of these old leaders are still worth ruminating.

Related reading: Connecting the world: Role of China and Singapore | Singapore and China: Scaling new peaks together | The construction of the Singapore Model in Mainland China