US House Speaker Nancy Pelosi is enroute to Taiwan for a visit that has kept the Biden administration and both sides of the Taiwan Strait on tenterhooks in past weeks. Whatever happens next, the people of Taiwan may be on the losing end. Taiwanese commentator Chen Kuohsiang explains the implications. 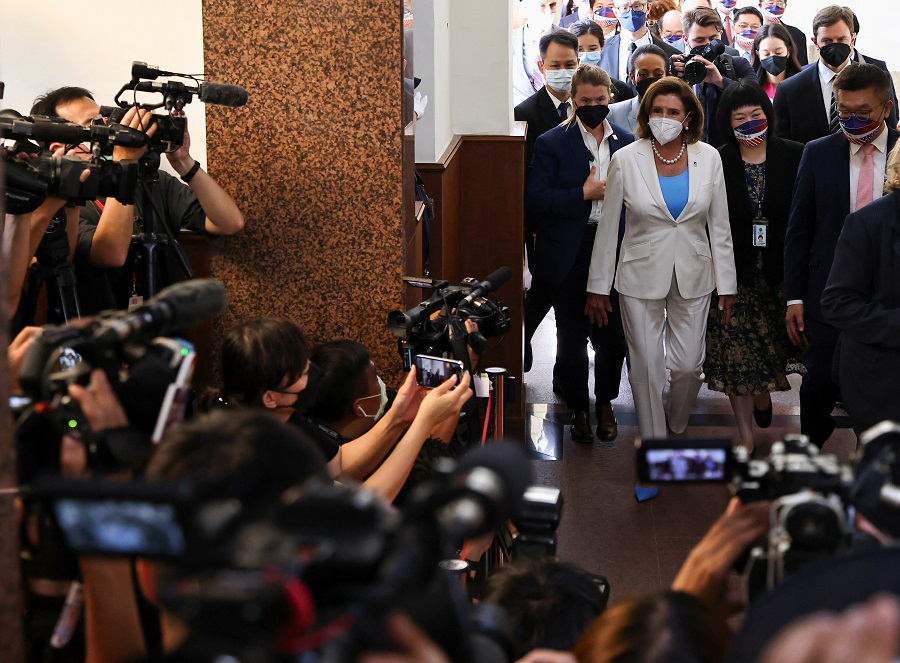 Candice Chan - 30 January 2023
A mall in Shenzhen came under fire for putting up white lanterns with black text as part of its Chinese New Year decorations, while an “ugly” rabbit-shaped light decoration was removed from another mall in Chongqing. Academic Zhang Tiankan muses on tradition and innovation, and the evolution of traditional decorations.
Read more
Translated by Candice Chan on 2 August 2022

US House Speaker Nancy Pelosi’s Asia tour can be considered her “grad trip”. Logically, a strong finish would be good enough, but she wants a happy ending, insisting on visiting Taiwan. The US and Chinese foreign and defence ministries have been in close contact, while US President Joe Biden has spoken publicly and also spoken on the phone with Chinese President Xi Jinping, but the “will she, won’t she” suspense over Pelosi’s possible visit has captured global attention.

... there are many who feel this is unnecessary and worry that Taiwan might go from playing host to being the victim.

Pelosi is a real master of hype, playing up her itinerary while the people of Taiwan wait with bated breath. The People’s Liberation Army (PLA) is conducting live firing exercises in the Taiwan Strait, while Chinese and foreign experts assess that China might send military aircraft to block or “accompany” Pelosi’s aircraft to enter Taiwan airspace. US aircraft carrier USS Ronald Reagan is also moving towards Taiwan from the South China Sea; with both sides poised, the Taiwanese are nervous.

Biden is in a dilemma. Agreeing for her to visit would mean having to deal with the consequences; not allowing it would lead to criticism of being weak. Asked about Pelosi’s Taiwan trip at a press conference, he said: “The military thinks it’s not a good idea right now.” This shows that Biden knows Pelosi wants to visit Taiwan and that China might send military aircraft to block it.

Naturally, the Chinese Communist Party (CCP) would not show any weakness, publicly warning of “serious consequences”, while Xi has made stern comments that “those who play with fire will be burned”.

While the US and China are tussling, Taiwan has no room to speak up. Tsai Ing-wen’s administration would be glad of Pelosi coming to show warmth and support, but there are many who feel this is unnecessary and worry that Taiwan might go from playing host to being the victim.

... the people of Taiwan are still worried about whether Pelosi’s playing with fire might lead to Taiwan catching fire.

There is general bipartisan and public support for Pelosi visiting Taiwan, and that she cannot cancel her itinerary, otherwise it would look like the US is wary or even afraid of China, confirming that Beijing has the authority to control Washington’s Taiwan policy. US allies would also lose confidence in the US.

But if Pelosi behaves as she did in 1991 — holding up a banner at Tiananmen Square showing solidarity with those who fought for democracy —  and insists on visiting Taiwan, Washington will be at risk of having to face off against Beijing.

Both leaders and officials in charge have probably reached an agreement or understanding to manage the risk and avoid military conflict, but the people of Taiwan are still worried about whether Pelosi’s playing with fire might lead to Taiwan catching fire.

While the Biden-Xi phone call was inconclusive on this, the fact that both parties discussed a possible face-to-face meeting suggests that they avoided a showdown on Pelosi’s potential Taiwan visit.

From China’s perspective, the US is actively promoting substantive US-Taiwan relations and it is increasingly clear that it is using Taiwan to control China. With the potential Pelosi visit taking “a large slice of the salami” when Xi is trying to retain power, Xi would certainly be criticised if he does not speak against the move.

From the US’s perspective, it is not the right time to have a showdown with Beijing, particularly since the war in Ukraine is still raging and the US cannot afford to stir up more trouble. Besides, Pelosi’s potential Taiwan visit was not a game plan initiated by the executive branch. It has in fact created disruptions and some problems.

... even if the government is aware that such a move is neither constructive nor holds any strategic value, it does not dare to go against public opinion.

The Pandora’s box of Pelosi’s visit

While the US is on the attack, the power to order the first serve does not exactly lie with the executive. Amid falling approval ratings, Biden does not want to be seen as a coward. When White House National Security Council spokesman John Kirby was asked about the military threat that Pelosi’s Asia tour might pose, he honestly said that there was no need to “to spark some sort of crisis or conflict” because of a potential visit and escalate matters because “nothing has changed” about the US’s “one China” policy.

Since the policy remains unchanged, if the House Speaker who is second in line to the presidency really visits Taiwan, what new message would this be sending? Such an unnecessary visit would be difficult to justify. However, amid strong anti-China sentiment in the US, even if the government is aware that such a move is neither constructive nor holds any strategic value, it does not dare to go against public opinion.

... if American politicians truly have Taiwan’s interests at heart, they should be extra careful and not aggravate the CCP unnecessarily.

Pelosi’s potential Taiwan visit has opened Pandora’s box. Beijing has expressed strong displeasure multiple times, with the PLA even threatening to take resolute and strong countermeasures including military action. While most Taiwanese welcome Pelosi’s visit, those with reservations think that although Pelosi’s intention is to express her support for Taiwan, if her visit escalates tensions in the Taiwan Strait and strengthens the CCP’s resolute to accelerate and ramp up its efforts to deal with Taiwan, will it instead backfire on Taiwan?

If US-China relations continue to worsen and a military conflict breaks out, it is Taiwan that would have to bear the consequences. Hence, if American politicians truly have Taiwan’s interests at heart, they should be extra careful and not aggravate the CCP unnecessarily. Otherwise, they could end up hurting Taiwan and do the opposite of what they set out to do.

After all, no matter who wins or loses in the end, Taiwan is likely to become the biggest loser.

Given Pelosi’s character and the US’s political climate, Pelosi was not ready to take heed of the executive branch’s considerations and difficulties, or bear the risks of softening her stance. She insisted on not thinking the worst and decided to boldly visit Taiwan, which could test the bottom line of Beijing’s tolerance of the US’s pro-Taiwan moves.

In fact, both countries are testing each other’s bottom lines with this potential visit. This is a battle of wills and military might. The world generally does not want to see a showdown in the Taiwan Strait between two great powers over a head of public opinion, and while the Taiwanese are glad to receive Pelosi, they too do not wish to see a US-China military conflict being ignited because of this. After all, no matter who wins or loses in the end, Taiwan is likely to become the biggest loser.

Related: China and the US not ready for showdown over Taiwan | Taiwan: A runway for great powers to flex their muscles? | Will Pelosi visit Taiwan this time? | The Pelosi visit that wasn’t: How should China respond to provocations from US politicians?