Taiwan's young men are rushing to complete their military service

With the Russia-Ukraine war top of mind, Taiwan is moving to ramp up its defence capabilities by lengthening its military service from four months to one year. As a result, parents and young men are trying to bring forward the period of service before the extension is implemented. But how effective will lengthening the period of service be? Zaobao journalist Chuang Hui Liang assesses the combat-readiness of Taiwanese young people. 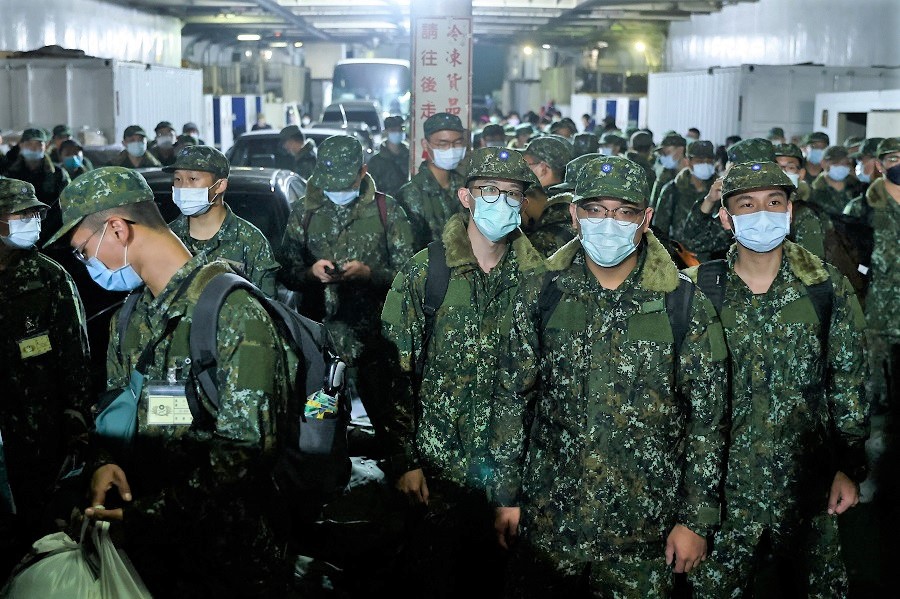 A group of soldiers who finished a month of training wait to depart from the ferry, and is about to finish the rest of their three-month mandatory military service in Nangan, Matsu, Taiwan, 17 March 2022. (Ann Wang/Reuters)

Grace Chong - 2 December 2022
Caixin notes that China is poised to roll out more policies to assist developers in an increasingly desperate attempt to arrest a protracted downturn of the multi-trillion-dollar property sector. However, amid the perform storm of changing demographics, Covid-19 disruptions, weakening demand and Beijing’s campaign of deleveraging, industry practitioners are bracing for a tough battle.
Read more
Translated by Grace Chong on 8 April 2022

During a forum on 31 March, a Taiwanese academic opened his speech with an account of how his neighbours had been pestering their son to return to Taiwan and complete four months of military service before finishing his studies in Europe.

Daily media reports on the Russia-Ukraine war have overwhelmed the Taiwanese, who have thus far experienced decades of peace. The intense discussion of “Ukraine today, Taiwan tomorrow” gives the impression that war is not that far away.

... parents are worried that if there are any changes to the situation in the Taiwan Strait, their children who are in the middle of serving their conscription will be deployed to fight on the front line.

While Taiwan’s Presidential Office had previously said that it was still assessing the situation, in response to a question in the Legislative Yuan posed by Democratic Progressive Party (DPP) legislator Lo Chih-cheng, Defence Minister Chiu Kuo-cheng  said that soldiers who currently only receive four months of military training “cannot fight a war”, and there are plans to extend conscription from four months to one year. The policy will be implemented without amending the existing law on national conscription.

When the news broke, many young students became anxious to serve the four months in the military before it is lengthened to one year. Meanwhile, parents are worried that if there are any changes to the situation in the Taiwan Strait, their children who are in the middle of serving their conscription will be deployed to fight on the front line.

The Taoyuan Department of Civil Affairs confirmed that many people have called to enquire about the possibility of bringing forward their military service. The department had to reiterate that there is no way to skip the queue. Many legislators in both the pan-Green and pan-Blue camps have also received phone calls from parents requesting for their children to serve their conscription earlier.

One young person who went to enquire at the district office said, “It would be best if I don’t have to serve longer in the military, but if it is not possible, then so be it.”

In response to the anxieties of parents and their children, Chiu explained that the plan is not yet finalised, but will be implemented as and when it is ready. He expressed his understanding towards representatives appealing for their constituents to bring forward their military service, but also apologised while stressing that the term of military service is not time-dependent — it is not a matter of a specific cut-off date to differentiate between four months and one year of service.

US pressure for change

Over the years, the US has expressed a few concerns over Taiwan’s self-defence capabilities — one, Taiwan’s defence budget is less than 3% of its GDP; two, the period of military service needs to be lengthened. The first can be addressed once the government adjusts its budget, but the second involves a wider array of measures, especially when young people are not as willing to serve in the military. Securing votes is a much more important consideration, hence even the pro-US Tsai administration will not make adjustments lightly.

... at least three to five years of military service are needed before soldiers are considered combat-ready.

As draftees usually serve four months in the military, most university students with plans for further studies overseas will allocate four months of their summer holidays over two consecutive years to complete their service. Those who serve the four months of service after graduation can opt for substitute military service or alternative civilian service, for example, the case of DPP deputy secretary-general Lin Fei-fan, who led the Sunflower Student Movement. To put it simply, servicemen who choose this option have no fighting capabilities.

Former Taiwan president Chen Shui-bian explained that during his presidency, evaluation by military experts showed that Taiwan could not have implemented an all-volunteer force in the face of a great enemy such as China’s People’s Liberation Army, and the US was not supportive of the idea either. Taiwan could only implement an alternative civilian service and shorten the duration of its military service, gradually adjusting its conscript-volunteer ratio from six-to-four to four-to-six. Subsequently, by the time of Ma Ying-jeou’s presidency, Taiwan’s compulsory military service had been shortened to four months.

According to Associate Professor Lai Yueh-tchien of National Chengchi University’s Department of Diplomacy, the period of military service was originally shortened because war studies research found that soldiers who underwent only 1-2 years of training were not prepared for war. Instead, at least three to five years of military service are needed before soldiers are considered combat-ready. Hence, the US and France decided to go with the voluntary recruitment of servicemen instead of conscription.

Under the “Ukraine effect”, a Taiwanese Public Opinion Foundation poll released on 22 March found that 75.9% of respondents agreed that the conscription period should be extended to “at least one year”.

Additional months of training not enough

Under the “Ukraine effect”, a Taiwanese Public Opinion Foundation poll released on 22 March found that 75.9% of respondents agreed that the conscription period should be extended to “at least one year”. While those aged between 20 and 24 have reservations about this, 56% still agreed to the extension, compared with 26% that disagreed. Over 75% of those aged 25 and above also agreed with the statement.

But academics from both the pan-Blue and pan-Green camps note an impending backlash from society and have reminded the government the extension of miitary service to one year must be done with caution. Instead of conducting surveys among the general public to assess the situation, the government should ask for the opinions of high and middle school students as well as their parents — let those who are about to serve military service decide their own fate, rather than those who have already been enlisted or do not need to enlist.

Former Taiwan Defence Minister Andrew Yang said on a political talk show that Taiwan’s four-month military conscription is too relaxed for the soldiers because of the short training period and low training intensity. He said Taiwan’s defence ministry should pay attention to building up the military’s combat capabilities, rather than extending military service or reinstating conscription under US pressure.

Yang also expressed his reservations about lengthening the period of military service to a year because the additional months of training would not help servicemen master high-tech weaponry. “Many countries require two years of military service because the first year is dedicated to training and the second to practical application. How would the military enhance its combat capability otherwise? Furthermore, can our resources and finances support the extension? If these problems cannot be solved, the extension would be meaningless,” he added.

People familiar with the matter also pointed out that many former military camps have long been turned into arts and cultural venues...

People familiar with the matter also pointed out that many former military camps have long been turned into arts and cultural venues such as the National Kaohsiung  Center for the Arts (Weiwuying). If the period of military conscription is extended, supporting measures have to be implemented as well.

Alternatively, why was the period of military service shortened in the first place and why is the extension being considered now?

Former Taiwan Vice-President Annette Lü said that the Tsai administration should not solely focus on resisting mainland China while neglecting the importance of defending Taiwan. Amid worsening tensions between both sides of the Taiwan Strait in recent years, it is necessary to reevaluate Taiwan’s relations with the mainland and its overly pro-US stance. Such a solution would certainly be easier than trying to extend the military service period.

Related: Why Taiwan is not Ukraine | The US's clear and unambiguous strategy towards the Taiwan Strait | Lessons from Ukraine: Is it time to give up strategic ambiguity in the Taiwan Strait? | If China strikes Taiwan, can it bear the punishment from the US and its allies? | Mainland Chinese TV drama sparks talk of ‘Taiwan spies’