According to a development plan for China’s software and information technology (IT) service industry from 2021 to 2025, China is expected to significantly expand its capacity for developing key software and build two to three open-source communities with international influence by 2025. Meanwhile, China’s giant state-owned enterprises are also rushing to crank up domestic purchases of innovative IT applications under government pressure. 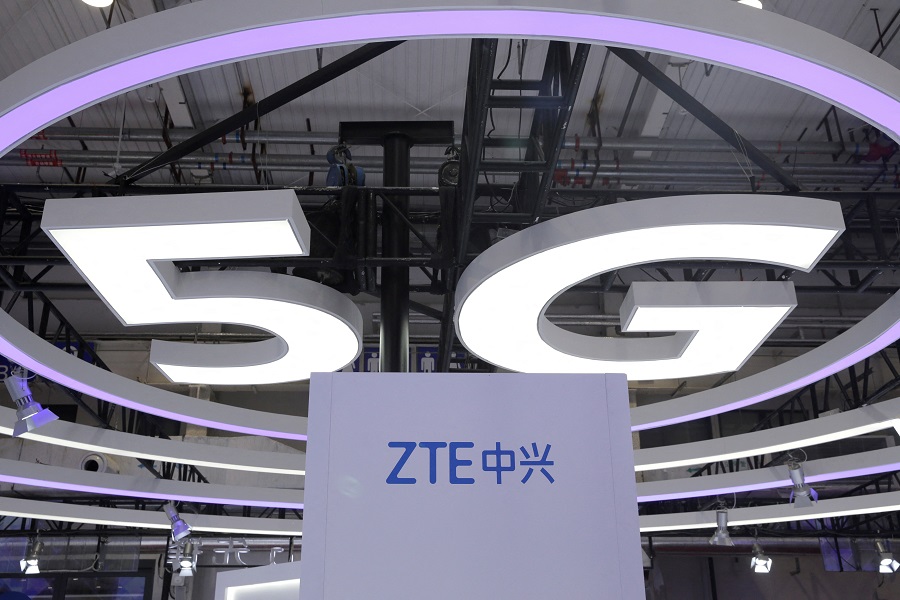 The ZTE logo and a sign for 5G are seen at the World 5G Exhibition in Beijing, China, 22 November 2019. (Jason Lee/File Photo/Reuters)

Grace Chong - 30 January 2023
Amid ongoing tensions, a high-level visit by US Secretary of State Antony Blinken to China in the coming week shows hope for improved relations between the two economic powerhouses. Zaobao correspondent Yu Zeyuan notes that while the meeting may not produce practical results, it is a much needed exchange to manage and control China-US relations from worsening.
Read more
Translated by Grace Chong on 29 December 2022

Under government pressure, China’s giant state-owned enterprises are rushing to crank up domestic purchases of innovative information technology (IT) applications.

One is the travel information provider TravelSky Technology Ltd. Its request for proposals in November attracted a flood of bids from domestic IT equipment and cloud service vendors including Huawei Technologies Co. Ltd. TravelSky had been relying on foreign equipment and now has to increase its use of made-in-China products, a state-owned vendor participating in the bidding told Caixin.

China is expected to significantly expand its capacity for developing key software and build two to three open-source communities with international influence by 2025, according to a development plan for China’s software and IT service industry from 2021 to 2025.

The country’s innovative IT applications industry — comprising IT infrastructure such as central processing units (CPUs), servers and cloud services, software such as database and operating system, application software and information security products — is expected to reach 922 billion RMB (US$132 billion) in 2022, reflecting a compound growth rate of 35.7% over the past five years, according to a report by the China Software Industry Association. The industry is projected to top 2 trillion RMB by 2025.

Behind the push is the US government’s increasing efforts to block China from acquiring advanced technologies such as cutting-edge chips...

The substitution of domestic for foreign IT products and services has gradually expanded from China’s government offices to industries ranging from finance to energy, telecommunications, education and medical care. Telecom, internet and IT companies and state-owned enterprises in those industries are rushing into the rapidly expanding market.

Behind the push is the US government’s increasing efforts to block China from acquiring advanced technologies such as cutting-edge chips, forcing the country to accelerate its development of semiconductors and equipment. Since Russia’s invasion of Ukraine in February, US and European tech giants including Oracle, Microsoft and IBM suspended sales of products and services in Russia, showing the potential risks to IT security from geopolitical conflicts. This drove home to Chinese enterprises the importance of homegrown software and applications.

Local governments began to roll out IT policies in the second half of 2021. According to incomplete statistics compiled by Caixin, at least 13 provinces and municipal governments — including Beijing, Shanghai and Tianjin — introduced such policies. Among them, more than a dozen cities pledged to grant one-time rewards to enterprises that get products included in a national catalogue of innovative applications. Shenzhen was the first municipal government to hand out subsidies to companies buying such domestically made products.

The tightening US sanctions have forced the market to conclude that Chinese companies need to replace their systems as much as possible...

Before 2019, Kingdee mainly served small to medium-sized business clients. In May 2019, Huawei landed on the US Department of Commerce’s entity list, effectively banning US companies from selling technology to the Chinese telecommunications giant. Since then, Huawei had to turn to global suppliers. After more than a year of negotiation, Kingdee received an order to supply the core software for Huawei’s human resources system.

“This was an opportunity to tap into big clients, but we thought the US-China dispute was only temporary at the time, and it may not be necessary for other big companies not on the entity list to switch to local suppliers,” Xu said.

With the expansion of US sanctions to cover more Chinese businesses, Kingdee received orders from several big central government-owned enterprises last year, and demand surged significantly this year. Most clients have specific deadlines and goals to replace their systems with domestically made ones, Xu said.

The tightening US sanctions have forced the market to conclude that Chinese companies need to replace their systems as much as possible, including PCs, servers, routers, chips, operating systems, databases and industrial software, a person familiar with China’s policy told Caixin.

The Prism programme leaked by former US National Security Agency (NSA) contractor Edward Snowden in 2013 exposed how the NSA collected internet communications from technology companies such as Google, Facebook and Microsoft, raising global concerns on network security and prompting China’s government to reduce its dependence on foreign IT suppliers, starting with government offices.

At the end of 2013, the central government started a pilot project to upgrade the Communist Party and government’s electronic document system, emphasising security and the controllability of the network system. Since then, the project has gradually spread out from the central government to provincial, county and municipal levels.

In 2014, China’s financial sector started a “De-IOE” campaign, replacing servers and databases from IBM, Oracle and EMC with products from domestic suppliers.

... it is clear to everyone that the ultimate goal is to make all equipment safe and controllable.

China’s financial sector conducted three batches of IT systems procurement since 2019, and at least 50% of some orders were for domestic suppliers, according to a person familiar with the financial sector’s programmes. The upgrades have been expanding from office systems to core banking business systems, the person said.

The financial innovative IT applications sector is estimated at 20 billion RMB in 2021 and is expected to reach 60 billion RMB this year and exceed 300 billion RMB by 2025, according to a report by Tianfeng Securities Co. Ltd.

In the telecom industry, the three major operators — China Telecom, China Mobile and China Unicom — have increased purchases of domestic servers since 2020. The three companies have so far bought more than 200,000 servers equipped with domestic chips, accounting for more than a third of their new purchases, according to data compiled by Caixin.

A source from a telecom company told Caixin that although there was no clear internal requirement, it is clear to everyone that the ultimate goal is to make all equipment safe and controllable.

In the energy industry, demand for advanced IT products mainly comes from power generation and power grid enterprises, whose generating equipment is largely imported. The Three Gorges Dam replaced its IT systems with domestic equipment, but similar moves haven’t been fully completed across the energy sector, according to a person at state-owned China Electronics Corp.

Three paths to catch up

Domestic tech companies have mainly followed three paths to catch up with global rivals. The first is localisation based on Intel’s x86 architecture. For example, Hygon Information Technology Co. Ltd. obtained an x86 license from Advanced Micro Devices, which has a cross-licensing agreement with Intel. The two companies set up a joint venture to license and build x86-compatible CPUs for the Chinese market.

The second path is the self-development of FeiTeng series high-performance CPUs and Kylin operating systems, which have been widely used by China’s aerospace industry. The third path is through a joint venture with SoftBank-backed British semiconductor giant Arm Ltd.

Each of the three paths has advantages and weaknesses. For example, the FeiTeng-Kylin route offers complete independence but relies on an ecosystem that is developing slowly, an industry insider said.

Hygon is one of the most popular domestic alternative CPU providers. The company’s CPU and deep computing unit products are the most applicable among domestic suppliers, several semiconductor industry participants told Caixin.

Hygon’s CPUs are widely used in telecom, finance, internet, education, transportation and other industries. Of the 7.35 billion RMB of domestic server purchases by China Mobile and China Telecom from 2021 to 2022, servers equipped with Hygon’s CPUs accounted for 50%.

Chinese state-backed CPU maker Loongson Technology Co. Ltd. is following the FeiTeng-Kylin path. In 2021, Loongson unveiled its first fully self-developed CPU architecture LoongArch, which uses an original instruction set and was hailed as a "historic breakthrough" by industry insiders. Its next-generation Godson CPU, the 3A6000, which the maker will sample with customers in the first half of 2023, will rival the performance of AMD and Intel chips, chairman Hu Weiwu said.

Loongson’s products are mainly used in the security equipment, e-government, energy, transportation, finance and education sectors. But Hu acknowledged that it’s not easy to get nongovernment orders.

When the global auto industry was hit by a chip shortage in the second half of 2021, many automakers had to turn to local suppliers, which further provided opportunities to domestic chipmakers. A number of Chinese medium-sized chipmakers, such as artificial intelligence chip startup Horizon Robotics, seized the opportunity to tap into large automakers’ supply chain.

In terms of integrated circuits using the most advanced technologies, China still lags behind. In October, the US banned shipments of equipment for fabrication of logic chips using a 16-nanometre or more advanced process, NAND chips with 128 layers or more, and DRAM chips above a certain threshold to China.

In the global semiconductor equipment market, the share of Chinese mainland manufacturers is still far behind those of US, Japanese and European rivals.

Some domestic enterprises can replace some low-end equipment, but a machine has tens of thousands of parts, and Chinese companies are unable to produce certain specific parts, a semiconductor equipment engineer told Caixin.

This article was first published by Caixin Global as "Cover Story: China’s Drive to Kick the Foreign IT Habit". Caixin Global is one of the most respected sources for macroeconomic, financial and business news and information about China.

Related: Will US chip controls work on China? | Has the US crushed China’s hopes for self-sufficiency in the chip industry? | The end of the global chip shortage: Now, chips won't sell | AI stars in China and the US lose their shine | China's 5G ambitions undiminished by pandemic and sanctions