When even blue skies are political in China

Chinese academic Ma Liang says it may be more worth it for the Chinese government to focus on long-term improvement of China’s air quality, rather than spending money and effort on clearing its skies only when there are major events. The government seems to be hoisting in this rationale, judging by the naturally grey skies during the Two Sessions this year. Can blue skies every day be a reality for Beijing in the near future? 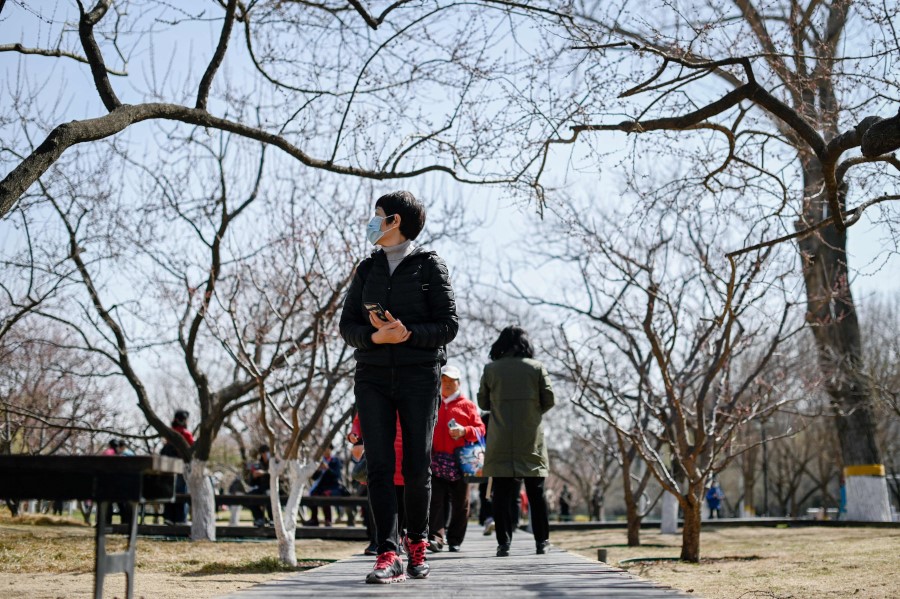 People walk in a public park under blue skies in Beijing on 16 March 2021. (Wang Zhao/AFP)

Candice Chan - 30 November 2022
An incident involving errors with Covid test results at a test facility in Lanzhou has opened the doors to deeper digging by netizens, indicating a pattern of outbreaks wherever there are facilities established under the Shenzhen Nucleus Gene Technology Co. Coincidence, or something else?
Read more
Translated by Candice Chan on 16 March 2021

Usually, Beijing’s skies are clear during China’s Two Sessions (两会, lianghui, annual meetings of the National People's Congress (NPC) and the Chinese People's Political Consultative Conference (CPPCC)), so that NPC delegates and CPPCC members from all over the country are welcomed with clean air, which also creates a conducive atmosphere for the meetings and shows the international community the progress that China has made. China even has a special name for this clear skies phenomenon — “Two Sessions Blue” (Lianghui Lan).

Notably, during this year’s Two Sessions (4-11 March), the skies were not blue, and were even mostly grey. Whether before or during the Two Sessions, air quality was “unbefittingly” low and sometimes even severely hazy. This made the organisers nervous about how to effectively hold the Two Sessions; it was also not possible for the delegates to relate the positive message of the Two Sessions with the reality of the surrounding environment.

“Two Sessions Blue” is something to look forward to, because it shows that human effort can overcome nature, and that China is capable of managing air pollution.

Blue skies are a favoured symbol of China’s political and economic cycle, reflecting the government’s hope of winning over public sentiment at key junctures, and its strong desire to make friendly overtures to foreign partners. Of course, these blue skies are not exclusive to the Two Sessions; they also appear during major events such as APEC and the Olympics as part of a powerful large-scale policy intervention to show China’s good side to the rest of the world.

“Two Sessions Blue” is something to look forward to, because it shows that human effort can overcome nature, and that China is capable of managing air pollution. Over the past few years, the Chinese government has put in a lot of effort to manage air pollution, and the air quality in Beijing and other areas in the north has been improving, hitting a ten-year historical best last year. So, if the Two Sessions had been held last year as scheduled, perhaps “Two Sessions Blue” would not have been so noticeable, given that the air quality during the so-called “off-season” was also not bad.

...air quality is just a decorative element for show.

But while blue skies are something to look forward to, Beijing and its surrounding areas usually have to pay a heavy price to make that happen. In order not to affect residents’ electricity consumption for heating during winter and spring, many industries in surrounding cities have to reduce or even stop production.

At the same time, restrictions and controls on transportation also affect people’s lives, and have a significant impact on economic growth. More importantly, the action taken during the Two Sessions and the non-action at other times also reflects that the government is incapable of effectively controlling air pollution, and that air quality is just a decorative element for show.

Last year’s Two Sessions was delayed due to the pandemic, from 5 March as regularly scheduled to 22 May. To some extent, “Two Sessions Blue” lost its meaning during the pandemic, but Beijing also had an opportunity to reflect. That the blue skies did not come as scheduled this year was due to climate factors, but also more due to political reasons.

Not engineering blue skies a show of confidence

Not artificially creating blue skies shows the more pragmatic and realistic side of the Chinese government. Focusing on putting up external appearances while ignoring the real problems would lead to failures in both. To some degree, this shows that the Chinese government is more confident and no longer hides, conceals, or whitewashes certain aspects.

This year marks the first year of China’s 14th Five-Year Plan. In a rare move, the draft plan does not mention a clear economic growth target for the year, but it does include some tough targets in energy conservation and reducing emissions, and the environment. This has to do with what Xi Jinping said last year about China’s plans to achieve a peak in carbon dioxide emissions and carbon neutrality, and is closely linked to the overall vision of high-quality development by 2035.

Of course, this also has to do with the serious impact that the pandemic has had on China’s economy, making the extravagant “Two Sessions Blue” with all its impact on businesses and everyday life not worth the effort, or even dangerous. While China was the only major global economy that achieved positive growth last year, a 2.3% growth rate is hardly enough to satisfy China’s enormous demand for jobs, or the government’s pace of expansion.

When blue skies are no longer a political issue, they can finally be resolved appropriately as a technical issue.

All about the substance

To make up for lost time, China needs to focus more on economic growth; it cannot continue to waste time and ignore the real problems for the sake of keeping up appearances such as “Two Sessions Blue”. At the same time, a slew of policies to cut taxes and reduce costs and encourage foreign investments have also stretched the finances of local governments. If companies are ordered to cut production or stop work, small and medium enterprises that are just beginning to recover will also face closure.

People would remember fondly the “Two Sessions Blue”, but in actual fact, everyone yearns for blue skies every day. When blue skies are no longer a political issue, they can finally be resolved appropriately as a technical issue. And when the government is no longer just concerned about air quality during key events such as the Two Sessions, APEC, and the Olympics, a wholesome daily improvement to the air quality should become the norm.

Incidentally, Beijing experienced a severe sandstorm blowing in from the Gobi desert on 15 March, in what has been billed the “sandstorm of a decade”. There were no blue skies to speak of as the city’s hues turned yellow amid a shroud of brown dust over the city and soaring air pollution levels.

A Greenpeace official was quoted by the AFP saying that “intense” industrial activities contributed to the pollution in Beijing in recent weeks, with the acceleration of the production of steel, cement and aluminium.

Will the "ultimate sandstorm" come back? Ma Jun, founder of conservation group the Institute of Public and Environmental Affairs (IPE), explained that three conditions are necessary for sandstorms: strong winds, source of sand and dust, and unstable climatic conditions. This latest sandstorm was a result of recent hot and wet currents, which Ma said led to previously ice-covered sand sources thawing out, which in turn was "easier to get blown around once there was a strong wind".

Ma noted that to prevent man-made disturbances to the fragile ecosystem, the first thing is to avoid over development of transitional regions from desert areas to traditional agricultural areas, as agricultural overdevelopment damages surface vegetation, while irrigation uses a lot of water and also leads to drying up of water bodies, forming new sources of sand and dust. Also, over-mining of coal or metal ore leads to tailings, and "mining dust can also accumulate into sources of sand and dust in a sandstorm".

Ma said it would be necessary to conduct long-term studies on the effect of climate change on the dry regions of northern China. He asked, "With rising temperatures during windy winter and spring, would we see more exposed land surface and sources of sand and dust?"