TSMC’s new facility in Arizona, US, is set to begin production in 2024, with a second facility underway. The company’s US$40 billion investment is a first in many ways and marks a major shift in the global semiconductor industry. But TSMC has made conservative remarks about the move, and the new plant has also roused much concern from the Taiwanese. 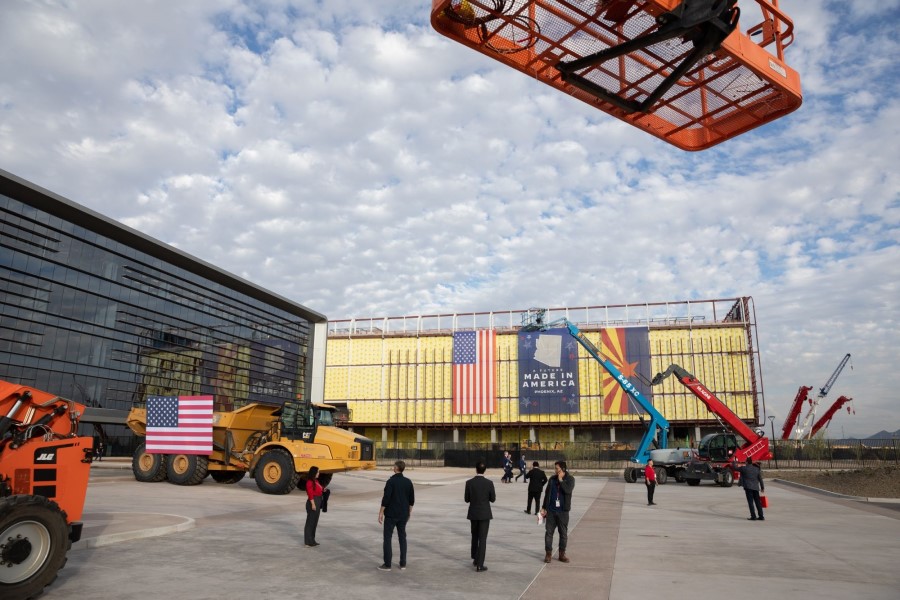 Attendees ahead of a "First Tool-In" ceremony at the Taiwan Semiconductor Manufacturing Co. facility under construction in Phoenix, Arizona, US, on 6 December 2022. (Caitlin O'Hara/Bloomberg)

Candice Chan - 30 January 2023
A mall in Shenzhen came under fire for putting up white lanterns with black text as part of its Chinese New Year decorations, while an “ugly” rabbit-shaped light decoration was removed from another mall in Chongqing. Academic Zhang Tiankan muses on tradition and innovation, and the evolution of traditional decorations.
Read more
Translated by Candice Chan on 8 December 2022

On 6 December, Taiwan’s TSMC held a “tool-in” ceremony, a symbolic installation of the first batch of equipment for its new facility in Phoenix, Arizona. It also announced plans to triple its investment at the plant to US$40 billion, which is its largest investment outside of Taiwan, and one of the largest foreign direct investments in US history.

US interest in TSMC

TSMC is the world’s largest semiconductor foundry, and its Arizona facility will begin production in 2024. The plant was originally set to produce 5 nanometre (nm) chips but was upgraded to 4 nm at the request of US clients. The process for 3 nm chips — the most advanced technology for TSMC — will be introduced in 2026. Meanwhile, work has already begun on TSMC’s second facility.

Evidently, Biden’s attendance at the ceremony in Arizona shows that the US government attaches great importance to the TSMC facility. Amid intensifying geopolitics, semiconductors have become an important strategic item for many countries, and governments are prioritising the localisation of manufacturing as a key policy objective.

Taiwan’s Business Next magazine reported that setting up an advanced chip manufacturing facility in the US is of incomparable importance for the flexibility of the US supply chain, as chips are critical to innovative technologies — more importantly, the chip-making technology could be used for the US’s defence technology.

TSMC remains conservative over the prospects following the setting up of its US facility.

The grand ceremony also represents the US’s hopes of reviving its manufacturing industry. In his speech, Nvidia founder Jensen Huang said, “Bringing TSMC’s investment to the United States is a masterstroke and a game-changing development for the industry.”

However, TSMC remains conservative over the prospects following the setting up of its US facility.

In a letter sent last month responding to the US Department of Commerce’s request for information, TSMC highlighted the issues in setting up a production line in the US, including the comparatively high construction and operating costs. TSMC also stated that its plant in Phoenix faces much uncertainty concerning the construction cost and the project as a whole. In comparison, building an equally advanced plant in Taiwan is significantly less capital intensive.

Over the next few months, there will be six more chartered planes to the US for more than 1,000 engineers and their families.

Exodus of top talent from Taiwan

Meanwhile, TSMC has assigned a large pool of engineers to the US to drive the project forward. According to a report by Taiwan Business Weekly on 16 November, a group of TSMC employees and their families have already made the move to Phoenix in early November. The first chartered plane brought in 300 employees and family members — the employees are all key personnel in the semiconductor industry. Over the next few months, there will be six more chartered planes to the US for more than 1,000 engineers and their families.

The large number of engineers moving to the US has led to a surge in the property market. Taiwan media found that one-third of residents in Deer Valley are TSMC employees and family members. Less than a five minute drive away from TSMC’s plant, their residential area has been dubbed “TSMC Village”, developed with modern villas and amenities including a fitness centre, barbeque pits, a swimming pool and shower rooms for pets.

Michelle Chang, who heads a local real estate company, told SET News that it has become almost impossible to rent a unit in the area amid soaring rents and a hot rental market. In 2020, the average price of a 186 square metres detached house ranged from US$350,000 to US$450,000. But following the announcement of TSMC’s proposed plant in Phoenix, prices skyrocketed to US$550,000.

The fact that the housing market in Phoenix is heating up amid rising interest rates and cooling housing markets elsewhere in the US illustrates the massive number of TSMC employees who are moving to the US, a phenomenon that has triggered a backlash in Taiwan.

Storm Media described the exodus of TSMC engineers to the US as “the largest talent migration in Taiwan’s semiconductor history”.

Storm Media also reported that TSMC conducted two rounds of interviews to select qualified talents, most of whom are experienced senior engineers. Employees who had participated in the process revealed that they had to pass both rounds of interviews and be recommended by two associate managers in order to be assigned to the US.

Commentator Chen Feng-hsin said that while 1,000 employees may seem inconsequential to an enterprise with over 100,000 employees, the 1,000 are made up of TSMC’s top engineers. Indeed, labour and talents are Taiwan’s main resource, as it lacks natural resources and does not have a huge market. Furthermore, due to the tense geopolitical situation, an increasing number of countries are poaching Taiwan’s talents. With batches of Taiwanese engineers leaving for the US, the society and economy is slowly bleeding out.

TSMC wants more investment from the US

TSMC founder Morris Chang said in April at The Brookings Institution that the US’s effort to increase onshore manufacturing of semiconductors will be “a very expensive exercise in futility” because the US’s semiconductor industry does not have the talent pool needed to expand and succeed. In addition, the cost of US manufacturing is also another hindrance.

However, TSMC’s current series of investments in plant construction seems to contradict the position of the company and its founder.

On the one hand, some commentators believe that TSMC is under political pressure to build a plant in the US, and the TSMC and its founder’s comments are meant to exert pressure on the US government to obtain more subsidies. On the other hand, other analysts believe that building a plant and deepening its relations with the US and American clients amid tense China-US relations not only aligns with political considerations but also helps major clients such as Apple and Nvidia develop new products.

For Chang, massive subsidies are a prerequisite for the company to enter the US.

TSMC had mentioned the high costs of building and operating a plant in the US in its letter to the US Department of Commerce. Notably, this letter was written in response to a request for public comment on the US’s chip incentive programme. At the same time, Chang had made his relatively harsh comment about the US’s “expensive” but “futile” effort when the US government’s US$52 billion subsidy for US semiconductor production had stalled.

Quoting industry experts, Nikkei reported that TSMC announced its plans to build a plant in the US in May 2020, but two years on, the chip bill was yet to be passed, prompting Chang to exert pressure on the US government. For Chang, massive subsidies are a prerequisite for the company to enter the US.

In October 2021, Chang criticised TSMC’s competitor Intel for its comment that US companies should have priority in receiving subsidies. He further asserted that it was almost impossible for the US to re-establish itself as a semiconductor powerhouse. Nikkei reported that TSMC’s conservative remarks about building a plant in the US were also aimed at securing subsidies from the US government.

It goes without saying that TSMC is an important player in the semiconductor industry given its status as the world’s largest semiconductor foundry. As the pride of Taiwan, it is also predestined to shoulder the political pressure from mainland China and the US, and has the responsibility to strengthen Taiwan’s competitiveness.

In the face of geopolitical risks and pressure from various parties, the art of giving deft responses must also be mastered to maximise the benefits for itself, instead of solely relying on chip technology. In the words of Nikkei, TSMC’s unique “verbal pressure” is also a skill in itself.

This article was first published in Lianhe Zaobao as “声势浩大的台积电上机典礼”.