Wuhan coronavirus: A test of human kindness and resilience

As Wuhan continues its lockdown, populations outside are imposing their own lockdown by shutting out Wuhan people from their borders and cities. Is the epidemic attacking the mind as well as the body as it tests human kindness and resilience? 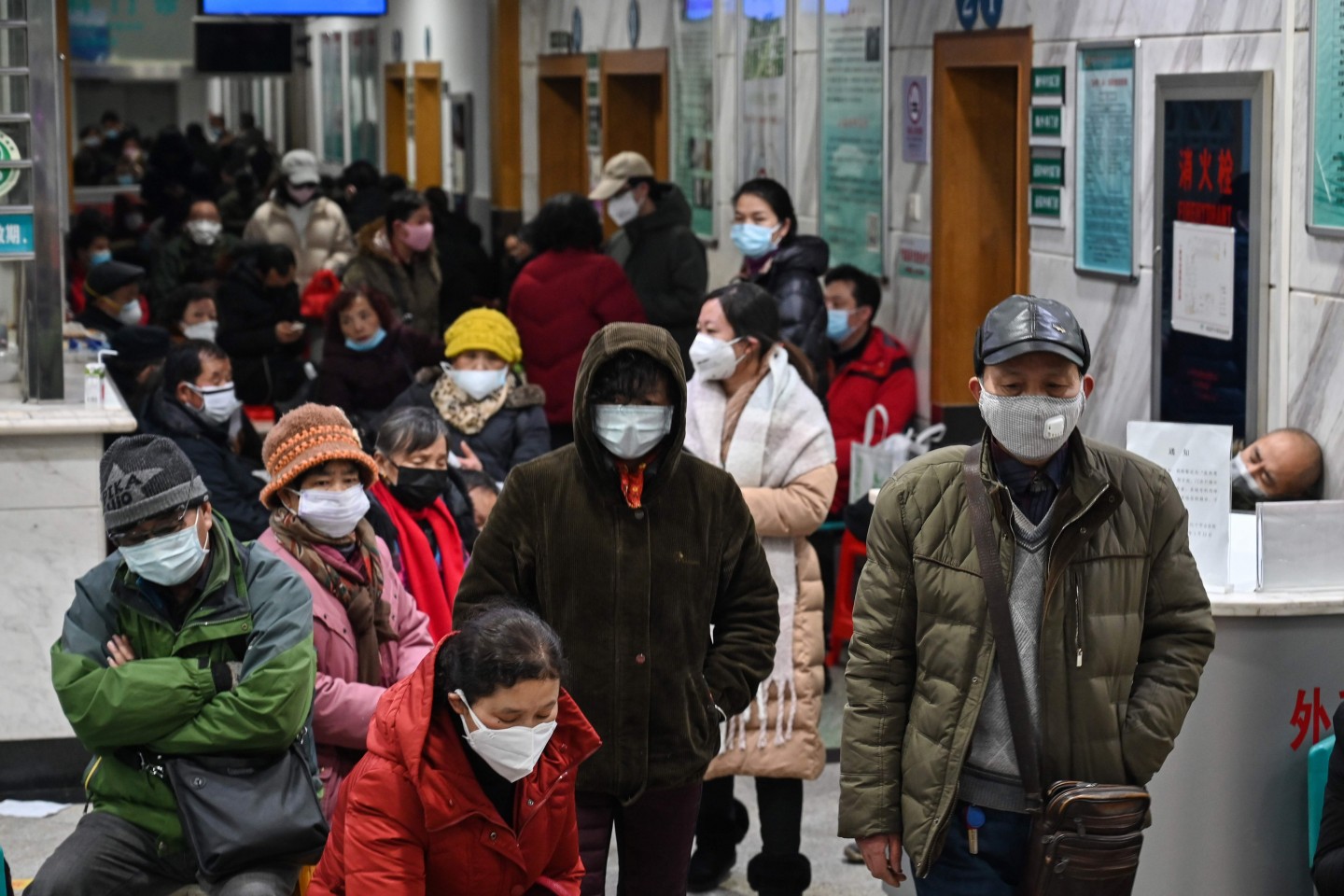 People wearing face masks to help stop the spread of a deadly virus which began in the city, wait for medical attention at Wuhan Red Cross Hospital in Wuhan on 25 January 2020. (Hector Retamal/AFP)

Grace Chong - 30 January 2023
Amid ongoing tensions, a high-level visit by US Secretary of State Antony Blinken to China in the coming week shows hope for improved relations between the two economic powerhouses. Zaobao correspondent Yu Zeyuan notes that while the meeting may not produce practical results, it is a much needed exchange to manage and control China-US relations from worsening.
Read more
Translated by Grace Chong on 29 January 2020

Wuhan residents trapped in a lockdown told me over the telephone that most of them have been doing relatively well in the past week. They are more worried about Wuhan people who are left stranded outside, like street rats without a home to return to.

Following the widespread outbreak of the Wuhan coronavirus, stringent checks, registrations, and quarantines were imposed across various regions within China on people from Wuhan and Hubei. To stop the virus from entering their shores, countries have also imposed limitations on the Wuhan and Hubei people, firmly guarding their borders against them.

It is clear that any slight mention of “Wuhan” will push all the wrong buttons.

On the eve of the Chinese New Year (24 January), a massive clash arose when Scoot placed 116 Wuhan passengers together with 219 passengers of other nationalities on a flight to Xiaoshan from Singapore. As the Wuhan passengers were unable to return to Wuhan, they flew to Hangzhou instead, and were met with public outrage upon landing there.

Upon knowing that they were on the same flight as people from Wuhan, the other passengers had emotional outbursts. They were not only worried about an infection; they were angered by the airline’s non-disclosure that they were travelling with people from Wuhan, and upset that they had to be quarantined upon landing on the eve of Chinese New Year. They quickly took to the Internet with immense anxiety and fear, escalating the incident into a “Zhejiang refuses to take in the people of Wuhan” (浙江拒绝空投武汉人) discussion topic on online platforms.

Following the gradual increase in precautionary measures taken against the outbreak, the discrimination of people from Wuhan and Hubei is becoming more obvious. This discrimination, fear, and enmity for the Wuhan people rose to its peak when Wuhan mayor Zhou Xianwang disclosed that five million people had already left Wuhan: hotels refused to accept Wuhan tourists; personal particulars of Wuhan people returning to Wuhan were exposed after registration; private car plates starting with “鄂A” (鄂 refers to Hubei, A refers to Wuhan) were surrounded and besieged while travelling outside of Wuhan; and endless sarcastic and spiteful remarks about the people of Wuhan have plastered the Internet. It is clear that any slight mention of “Wuhan” will push all the wrong buttons.

Discrimination against the people of Wuhan and Hubei has even become an issue of “us” vs “them”. On the third day of Chinese New Year (27 January), a group of Shanghai passengers ignited a battle against Wuhan passengers at the Chubu Centrair International Airport by refusing to board the same plane as them. The fight lasted for five hours, alarming local police officers and the consulate-general of the People’s Republic of China in Nagoya, and even made to Japan news headlines.

Seeing such news reports, I asked myself, “If I were also a passenger on the same flight as them, would I be at peace with the fact that I would be flying with a group of Wuhan passengers?”

Logically speaking, although there are many confirmed cases in Wuhan, this number is insignificant compared to the population of this city. It would be ridiculous to view each and every person from Wuhan as “walking viruses”. Moreover, this group of Wuhan tourists could have already left Wuhan before the coronavirus outbreak. Even if they did leave after the outbreak, there is no guarantee that they were carriers of the virus. Yet, am I fully convinced and at peace with myself? In the face of the current lack of a cure for a virus that could be fatal, no one can guarantee their absolute safety from the virus.

The current “Wuhan terror” is actually a manifestation of the fear and uncertainty caused by the coronavirus outbreak and the unknown progression of future events. The only known fact to many people in the midst of a great uncertainty is that the outbreak started from Wuhan, the epicentre of the outbreak is in Wuhan, and massive numbers of cases discovered in other parts of the world are closely related to Wuhan. The frightened people thus hope to cut all connections with everything related to Wuhan in an attempt to separate themselves from the virus. This mindset is understandable.

Yet, in the eight-hour window before the lockdown took effect, “a great escape” took place in Wuhan...

To a certain extent, this anxiety can be attributed to the overly lax control of the situation before Wuhan’s lockdown. Local officials did not disclose adequate information in the early stages of the outbreak and even optimistically said that the virus cannot be spread from person to person. Thus, before the outbreak caught the attention of various parties, many people of Wuhan were unaware of the gravity of the virus and either went home for Chinese New Year celebrations, travelled overseas, or went on business trips elsewhere. Additionally, tourists to Wuhan could also have brought the virus back to their home countries when they returned home.

After the declaration of Wuhan’s lockdown, the Wuhan people should stay in Wuhan as much as possible and take good care of themselves to minimise the risk of spreading the virus to other people. Yet, in the eight-hour window before the lockdown took effect, “a great escape” took place in Wuhan. One successful “escapee” even posted online that she had lowered her temperature by taking antipyretics to evade temperature checks and had gone on holiday at Shanghai Disneyland. While such cases are rare, behaviours of certain individuals that displayed a lack of social responsibility and care for the safety of others were magnified online, deepening the worries of outsiders and brought much damage to the reputation of Wuhan people.

However, the people of Wuhan are not to be blamed for the mystery coronavirus outbreak. In fact, they are the biggest victims of this outbreak. In a bid to contain the virus from spreading further, unprecedented lockdowns were imposed on various cities including Wuhan and Hubei, hoping to control the outbreak to the greatest extent possible. Based on Western values, these policies could even be considered a breach of human rights. The people of Wuhan and Hubei not only sacrificed their own mobility and freedom, they also have to deal with immense psychological stress stemming from an inability to leave the epicentre of the outbreak. These sacrifices are made to contain the outbreak and reduce the safety risks of other regions as much as possible.

Chinese state media have reiterated over the past two days that Wuhan terror will not bring any good to the battle they are now fighting. They called for the Chinese society to not label the people of Wuhan and Hubei or demonise them. Some online platforms also said that a more practical remedy for the situation is not by shouting slogans of “武汉加油!” (Wuhan, you can do it!), but by treating the people of Wuhan with kindness and respect. However, in the midst of a Chinese society shrouded in anxiety and fear under the shadow of the outbreak, dissipating Wuhan terror is perhaps best achieved through the containment of the virus as quickly as possible.