Social media movements such as the Milk Tea Alliance are tapping into discontent with the regional decline of democracy and fears about the rise of China as a hegemonic power. ISEAS visiting fellow Quinton Temby explains why anti-China sentiments are gaining traction and how it is affecting local politics. 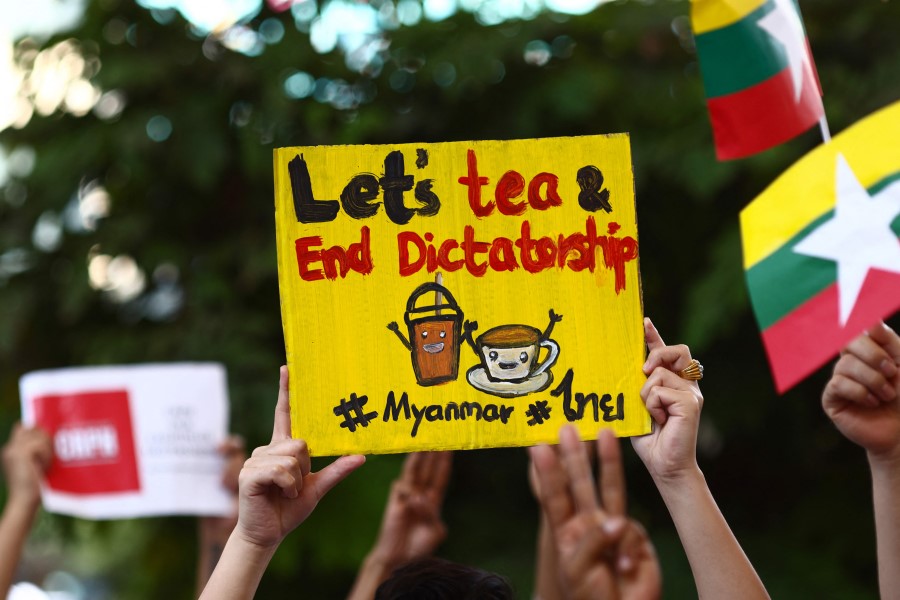 Myanmar migrants in Thailand holds signs relating to the "Milk Tea Alliance" as they take part in a protest in Bangkok on 28 February 2021, against the military coup in their home country. (Jack Taylor/AFP)

Candice Chan - 11 August 2022
China’s Big Fund has come under scrutiny following a series of high-profile corruption investigations involving key persons in the chip industry. The CHIPS Act was also recently signed into law in the US to counter China, which makes things even more difficult for the sector. Zaobao correspondent Chen Jing speaks to industry experts to find out how the Big Fund can come out of this crisis.
Read more
Translated by Candice Chan on 17 March 2021

No country more than Myanmar illustrates the perils and promise of social movements in the internet age. In 2018 the Myanmar military, the Tatmadaw, was accused of using Facebook as a tool of genocide against the Rohingya minority, posting fake news to stir up hatred in what the UN called “a textbook example of ethnic cleansing”.

But since the Tatmadaw’s 1 February coup, the tables have turned. It has been caught off guard by a social media-fuelled uprising against the sudden re-imposition of military rule. The very same platforms that were vectors of hate speech are now vectors of free speech that the military is desperate to shut down. The Myanmar case made it into the 2020 Netflix documentary on the evils of social media, The Social Dilemma. But if one of the key assets of the regime is geographical isolation, the full impact of the internet on Myanmar is only beginning to play out.

Consider how the internet has connected protesters in Myanmar to the pan-Asian pro-democracy movement known as the Milk Tea Alliance. The movement emerged from a “meme war” involving activists from Thailand, Hong Kong, and Taiwan who used the popularity of sweet milk tea drinks in their respective countries as a symbol of solidarity against the Chinese nationalist trolls they faced on Twitter. During the meme war, images and hashtags went through an accelerated process of variation and selection until the milk tea meme, having hit the sweet spot of identity plus irony, went viral.

It taps into discontent with the regional decline of democracy and fears about the rise of China as a hegemonic power.

The Milk Tea Alliance is just the latest meme to become a movement, jumping off the internet and into the streets. Having spread to Myanmar, it brings protesters there a powerful tool with which to frame opposition to the Tatmadaw and to appeal to the international community. It comes with a set of related symbols and tactics, such as the three-finger salute inspired by the Hunger Games movies, first seen in Thailand.

It might be easy to dismiss the Milk Tea Alliance as a Gen-Z internet joke. But the meme is successful in tapping into something deeper in the collective consciousness of a region that is famously diverse and defiant of collective action, as ASEAN can attest. It taps into discontent with the regional decline of democracy and fears about the rise of China as a hegemonic power.

Anxiety about the growing influence of China

There is a bigger picture beyond the protests in Myanmar. The country fits a broader pattern of recent years in which disparate protests in Southeast Asia, triggered by different events, exhibit undercurrents of anxiety about the growing influence of China. Protesters in Thailand calling for reform of the monarchy also criticise the close alliance between the Thai generals and the Chinese Communist Party. Strikes and labour protests across Indonesia last year against an omnibus “job creation” law channelled concern that jobs would be outsourced to Chinese migrant workers. China’s heavy-handed “pandemic diplomacy” in the Philippines sparked an online backlash over the South China Sea.

At its best, the China dimension to these protests sublimates into a democratic debate; at its worst, it dredges up historical prejudices and dangerous tropes. The latter occurred in Indonesia in 2019 during the post-election violence, when disinformation went viral online claiming that China had infiltrated soldiers into the country to put down the protests and bolster the Jokowi government. The Indonesian police were forced to hold a press conference to debunk the claims, which had targeted several Indonesian police officers with supposed Chinese features.

The same trope emerged in Myanmar in recent weeks, with false claims made in viral posts on Facebook that Chinese soldiers had been flown in to repress the protest movement. The balance of evidence suggests that China does not support the coup in Myanmar — not least because the government of Aung San Suu Kyi was relatively pro-Beijing. But suspicions ran high online anyway, lending an anti-China edge to the pro-democracy protests.

To the extent that China’s power gap reflects an elite-popular divide, China is left vulnerable to populist politics in Southeast Asia. Insurgent politicians may seek to exploit anti-China sentiment to gain office — a trend that has emerged in Indonesia among the Islamist opposition.

The anti-Chinese sentiment is not new to protests in Southeast Asia. But as China rises we should expect such sentiment to grow, as old fears blend with new anxieties. Opinion polling by the Pew Research Centre indicates unfavourable views of China spiked globally even prior to the pandemic. The 2021 ISEAS State of Southeast Asia survey of policymakers, academics, think-tankers and business people shows that support for aligning with China versus the US has fallen, despite China’s intense pandemic diplomacy efforts. While 76.3% of 1,032 respondents agreed that China was the most influential economic power in the region, 72.3% of them worried about the same influence.

While most governments of Southeast Asia wish to benefit from economic ties with China, their domestic populations are at best sceptical of China’s role. China thus suffers a gap between its hard (military, economic) and soft (cultural) power in Southeast Asia. Leading indicators of this power gap can be detected in the protests that gather force online, where soft power is in the hands of digital natives, not political elites.

To the extent that China’s power gap reflects an elite-popular divide, China is left vulnerable to populist politics in Southeast Asia. Insurgent politicians may seek to exploit anti-China sentiment to gain office — a trend that has emerged in Indonesia among the Islamist opposition.

Time will tell whether protests in Southeast Asia cohere into democratic movements or devolve into anti-Chinese populism. Outcomes will be determined, in part, by how old institutions respond to the new challenge of networked protest in the internet age.

This article was first published by ISEAS – Yusof Ishak Institute as a Fulcrum commentary by Quinton Temby.

Related: Why Myanmar people believe there is Chinese involvement in Myanmar coup | A rising China needs to demonstrate moral courage on Myanmar issue | Why China has everything to lose from Myanmar coup