Beijing’s old alleyways or hutongs are known for their historical value and they have undergone renovations over the past few years. But one aspect that is still a work in progress is the provision of public toilets in these areas, which can be in poor condition. The latest phase of the “toilet revolution” focuses on building facilities fit for purpose and for their users to have a mindset change. A tall order? Meng Dandan finds out. 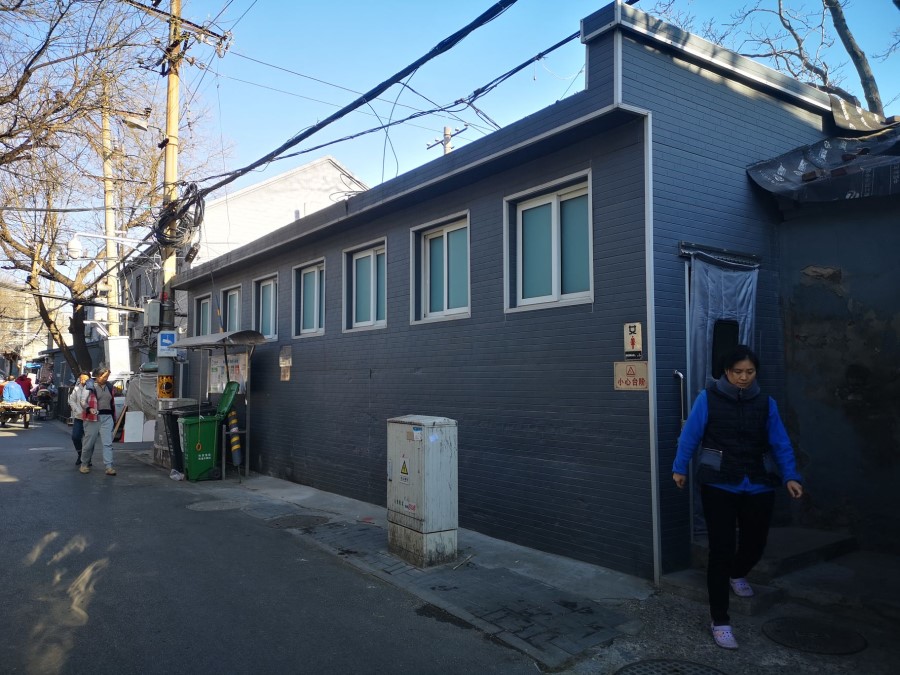 Candice Chan - 30 January 2023
A mall in Shenzhen came under fire for putting up white lanterns with black text as part of its Chinese New Year decorations, while an “ugly” rabbit-shaped light decoration was removed from another mall in Chongqing. Academic Zhang Tiankan muses on tradition and innovation, and the evolution of traditional decorations.
Read more
Translated by Candice Chan on 22 December 2021

While demolition and renovation work in Beijing’s old city has ceased in the last couple of years, the living conditions of residents in some original old hutongs (networks of ancient alleys and homes) still needs managing.

After the Chinese government proposed a “toilet revolution” in 2015, the condition of toilets — the bane of residents of the old city — has improved considerably, while the latest round of the hutong toilet revolution focuses on the elderly and respecting the privacy of toilet users.

In 2018, a team from the Eco-Design Research Institute (EDRI) under the Academy of Arts & Design at Tsinghua University worked on a fresh wave of the hutong toilet revolution in Beijing’s Dongcheng district. Over the past three years, the team has designed 1,325 public toilets for hutongs, of which 800 have been completed, with the remaining 500 on hold due to the pandemic.

Professor Wu Zhou of the EDRI says this toilet revolution, mostly aimed at the hutongs in the Dongcheng district, is to give hutong residents some “dignity” in using the toilet.

Some old toilets had to have their bricks and tiles kept, others had to have every single pit maintained, and yet others shared a wall with the adjacent home.

Dongcheng district is the heart of Beijing. It is where old hutongs and the population are both dense, with generally cramped living spaces. In the 1990s, it was a common sight to see bleary-eyed residents queuing for the toilet early in the morning. At the time, public toilets in Beijing were few and foul-smelling, with no privacy to speak of for users. The filthy condition of toilets was a social problem that plagued residents and tourists alike.

In 2017, when Wu Zhou and his design team started to study the toilets in Dongcheng, they did not expect hutong toilets to be their most difficult renovation project.

Some old toilets had to have their bricks and tiles kept, others had to have every single pit maintained, and yet others shared a wall with the adjacent home. The modern design concepts of Wu and his team seemed useless. What the designers had to do was to resolve issues of stench and privacy within a few square metres.

The design team started with the details, going door to door to find out what the hutong residents actually needed. “For example, were there any elderly women with bad legs? Any 200kg elderly men?” Wu patiently explained the considerations behind every design detail: “Did the stalls have to be wider? Was there a need for toilet bowls? Any change had to be made with ample reason, and the residents’ views had to be sought.”

The most difficult part of the design process was not being able to demolish the old facilities and build new ones. Wu said: “Once the old facilities were torn down, it is very likely the residents would not agree to new ones being built. Nobody wants to live right next to a toilet.”

In fact, to resolve toilet difficulties, before the Beijing Summer Olympics in 2008, the Beijing government embarked on an extensive effort in renovating toilets. There was a jump in the number of toilets all over the city, especially in the hutongs, where there was a toilet every 300-500 metres. “Freedom to use the toilet” was achieved.

In 2017, Beijing launched a new urban planning blueprint specifying that the old city would not be relocated. To improve the lives of the remaining hutong residents so that they would be able to enjoy the same quality of life as those in high-rise buildings with full facilities, the government launched a project to bring toilets into courtyards and homes.

This project for the public good resolved some toilet-related difficulties for residents. But for families living in a space measuring barely 10 square metres, they were still unable to “find relief” in toilets at home, but had to clear their chamber pots at the public toilets every morning. In view of this, the design team came up with waste disposal areas tailored to public toilets in hutongs.

Also, to reduce the smell as well as to provide comfort from the freezing temperature during winter, the design team used new construction materials, such as those used in constructing aircraft hangars.

In Wu’s view, designing hutong toilets is not to create social media-worthy spots for tourists, but to truly preserve the dignity of users.

Toilet paper is also an important part of the toilet revolution. In 2002, Beijing scrapped toilet entrance charges, but many toilets do not provide toilet paper. Some public toilets that did provide free toilet paper had to prevent people from using too much and even pilfering by installing dispensers with facial scanners.

“People should not be made to exchange their personal information for a piece of paper to wipe their bottoms.” Wu did not mince his words. “The toilets were renovated for the people, and they should be allowed to use them with dignity.”

He also explained that one key reason hutong toilets used to clog frequently was the many different types of toilet paper around.

Wu and his team developed a dispenser for free toilet paper without facial scanning — these dispensers that work through hand sensors are in wide use in Dongcheng, Tiananmen, and Wangfujing.

To be fair, the toilet conditions for Beijing’s hutong residents have improved significantly from a decade ago, especially in commercialised hutongs, where some toilets are nice both inside and out.

He said China’s toilet revolution first calls for a “mindset revolution”, and the Chinese traditionally think that it is acceptable for toilets to have a bit of a smell.

However, many hutong toilets remain cramped with limited amenities, and do not match up to public toilets in swanky commercial areas or well-known attractions in terms of privacy and comfort.

Qian Jun, founder of the Yu Ting Public Welfare Foundation in Kunshan and the Research Center for Toilet Culture in Beijing said the renovations of Beijing’s hutong toilets have brought many human touches, but there remains a certain proportion of small toilets that “do not even have dividers”, and can only meet the most basic needs.

He said China’s toilet revolution first calls for a “mindset revolution”, and the Chinese traditionally think that it is acceptable for toilets to have a bit of a smell. With this mindset, those who maintain and use toilets are more tolerant, so that the toilet industry has not kept pace with the economy.

Madam Shen, 85, who lives in Dong Si Liu Tiao Hutong in Beijing’s Dongcheng district, had a toilet installed about ten years ago, but she is still accustomed to using the hutong toilets on her walks. Now, she finally does not have to worry about not having any toilet paper on her. “I just put out my hand and the paper comes out.”

Related: Preserving the hutong: "What’s in it for us?" | Preservation of Chongqing’s oldest central business district: Success or failure? | Liu Thai Ker and Ke Huanzhang: Urban planners are servants of the city | Architects Mok Wei Wei and Chang Yung Ho: Imagining and building a humane city