Biden has good strategies, but can he implement them?

Chinese academic Zhang Jingwei notes that while US President Joe Biden has cast a wider net in building alliances compared with his predecessors, much of these frameworks are lacking in substance. Will the US be able to benefit from them and use them against its strategic rival China? 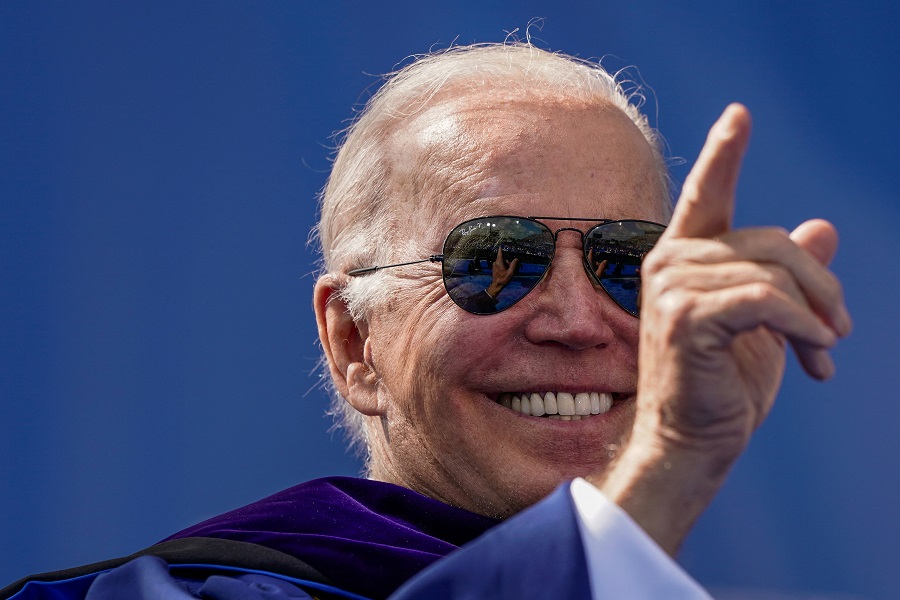 US President Joe Biden gestures during the commencement ceremony at the University of Delaware in Newark, Delaware, US, 28 May 2022. (Elizabeth Frantz/Reuters)

Grace Chong - 30 January 2023
Amid ongoing tensions, a high-level visit by US Secretary of State Antony Blinken to China in the coming week shows hope for improved relations between the two economic powerhouses. Zaobao correspondent Yu Zeyuan notes that while the meeting may not produce practical results, it is a much needed exchange to manage and control China-US relations from worsening.
Read more
Translated by Grace Chong on 16 June 2022

The war in Ukraine is progressing according to the US’s expectations — Russia’s blitzkrieg or lightning war has turned into a protracted conflict and US global leadership has strengthened. Western countries have followed the US’s lead in imposing tough sanctions on Russia while NATO is not only expanding its presence in Europe but also extending its “tentacles” to the Asia Pacific region. Indeed, “America is back” in Europe and the West’s anti-Russia efforts have proven effective.

As the US views China as its main strategic rival, the limited areas of cooperation between the two countries are now marked by extreme competition. US President Joe Biden has injected a substantial anti-China component to the Indo-Pacific strategy that former US President Donald Trump proposed towards the end of his term, forming a “three-in-one anti-China alliance”.

The Quadrilateral Security Dialogue (Quad) acts as a fulcrum for the US’s geopolitical containment of China in the Indo-Pacific region, while the AUKUS security pact involving Australia, the US and the UK acts as another fulcrum for military deterrence against China.

During his recent Asia tour, Biden launched the Indo-Pacific Economic Framework for Prosperity (IPEF) consisting of 13 countries and covering 60% of the world’s population and 40% of global GDP. Its size and volume exceeds that of the Regional Comprehensive Economic Partnership (RCEP). Furthermore, the 13 members of the IPEF are either US core allies, countries with territorial disputes with China, or countries that hope to gain benefits from both China and the US.

The US is confronting China and Russia in both the Eastern and Western worlds as it fights Russia in Europe and reins in China in the Indo-Pacific. This can be seen as the pride of Biden’s era.

While the US’s hard and soft powers during the Cold War era were much stronger than they are now, at the time, it was reluctant to confront China and Russia at the same time. Instead, it worked within the US-China-Russia triangle, collaborating with one leg of the triangle against the other.

... the Biden administration has obvious shortcomings as well — their plans are well designed but poorly executed.

Now, the US seems ready to go against both China and Russia. This is because the Biden administration is adept at corralling its allies by addressing their strategic concerns. Compared to Trump’s style of antagonising allies and treating them like enemies, Biden’s ability to form alliances is exceptional.

However, the Biden administration has obvious shortcomings as well — their plans are well designed but poorly executed. As a result, Biden’s blueprint for the country’s internal and external affairs are unlikely to materialise and will become “rotten-tail buildings” (unfinished projects).

This problematic trait extends to the Democratic Party, which is good at concepts, ideologies, alliances, game plans, confrontations and being the ring leader.  For example, former US President Barack Obama’s Asia Pacific rebalancing strategy and Trans-Pacific Partnership (TPP) were ultimately nullified by Republican Trump.

Biden has cast a wider net in forging alliances than the Obama administration ever did. Although the Biden administration has managed to galvanise its allies amid a common opposition to China and Russia, maintaining unity within that circle is proving to be the bigger challenge.

If the conflict becomes a protracted war, it would be difficult for the West to continue their support for Ukraine.

Thus far in the Ukraine war, gains by the US and the West have hinged on the poor performance of the Russian military. If the conflict becomes a protracted war, it would be difficult for the West to continue their support for Ukraine. The US$40 billion Ukraine aid package that Biden recently passed was harshly criticised by Trump. Indeed, the US is unable to afford the cost of a protracted war. Neither does NATO have the stamina for it, and support from the countries in Europe will gradually splinter.

However, Ukrainian President Volodymyr Zelenskyy has become an anti-Russia hero who is holding the West captive after he turned support for Ukraine in the West into an issue of political correctness. This is a heavy burden for the Biden administration which has always sought to be politically correct.

India’s stand on the Ukraine crisis clearly shows its ambitions as a big country and its resolve not to be a pawn for the US or the West.

India’s membership in the Quad makes the geopolitical grouping less cohesive. For India, which has a tradition of non-alignment, growth is its priority. It is not interested in being a flunky of the US in the Indo-Pacific and helping to keep China in check. Its real intention is to leverage the US, Japan and Australia in balancing China. India’s stand on the Ukraine crisis clearly shows its ambitions as a big country and its resolve not to be a pawn for the US or the West.

AUKUS is a geo-military grouping made up of the core members of the Five Eyes intelligence alliance, and acts as a check on China’s maritime military strength in the Indo-Pacific region, especially the Asia Pacific, particularly as China is deepening its strategic partnerships with South Pacific countries.

However, in his speech on the US’s China policy, US Secretary of State Antony Blinken stressed that the US does not want direct conflict with China and does not seek a “new Cold War”. Meanwhile, the UK has always sat on the fence, while Australia has an even tougher choice.

As for the IPEF, it is a trade framework that does not involve reducing tariffs — the focus is on supply chain restructuring and cooperation in clean energy and anti-corruption. In terms of function, it is no match for the RCEP, much less the more powerful Comprehensive and Progressive Agreement for Trans-Pacific Partnership (CPTPP) with higher trade standards. For the IPEF to be a useful tool, the US and the other member countries will have to “fill in the blanks” through talks and negotiations.

If a Republican gets into the White House, the IPEF will go up in smoke.

Judging by the rotation of political parties in the US, it will be difficult to push through the IPEF, unless Biden gets a second term and the negotiations are completed. If a Republican gets into the White House, the IPEF will go up in smoke.

Ironically, even the Biden administration did not want to inherit the TPP from the Obama era; why would Biden’s opponent or a president from his own party take over his legacy after his term? Technically, whether it is Australia, New Zealand, Japan or South Korea, or the ASEAN countries, neither of them would drop the people network or multilateral trade groupings in the region — be it the RCEP, the CPTPP or the IPEF, they would not forgo their trade interests. Notably, if the IPEF affect India’s slice of the pie, it might pull out, just as it did in opting out from joining the RCEP at the last moment.

Biden’s Indo-Pacific strategy seems perfect, but in fact, it lacks rigour and is a challenge to implement. Having a blueprint without implementation is like a Barmecide feast — perhaps that will be the greatest embarrassment and the fate of the Biden era.

Countering China is the US’s main strategy, but the irreconcilable split between the Democrats and the Republicans is a decisive flaw in the implementation of the US’s strategy against China. As the New York Times said, Biden may have reunited the West, but he may not be able to reunite America.

Related: Biden’s Asia tour: US deepening its commitments to counter China | Biden's 'gaffe' on Taiwan reflects changing status quo in the Taiwan Strait | The US is winning at building relationships with China's neighbours | The flaws in Biden’s China policy | A tall order: US policy effort in SEA amid rising Chinese influence | ‘Doomed to fail’: Chinese media dismisses the US’s ASEAN diplomacy | Shangri-La Dialogue 2022: A tougher diplomatic battle for China?