The biggest winner in the China-US trade war? Taiwan.

Various stakeholders stand to gain from a protracted US-China trade war. So far, one of the biggest — if not the biggest — beneficiaries of the spillover effect is Taiwan. Professor Zhu Ying looks at the financial and political benefits Taiwan is reaping. 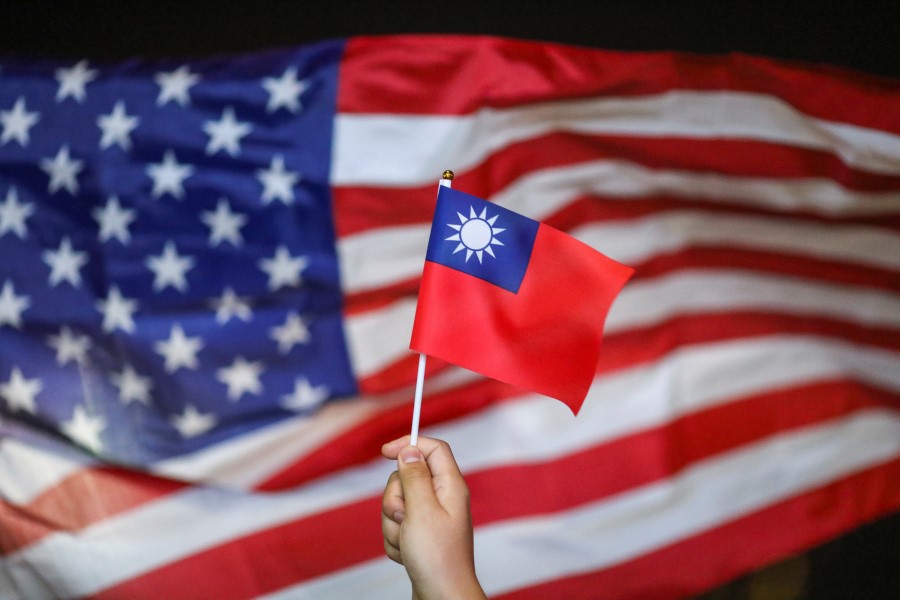 Taiwan is benefiting from the China-US trade war, and the US is supportive of Taiwan. (Athit Perawongmetha/REUTERS)

Candice Chan - 28 November 2022
Often referred to as the world’s economic “canary in the coal mine”, South Korea has seen its economy tumble over the past year, impacted by external factors such as US interest rate hikes and signs of recession in key trade partners. The accumulation of domestic factors — currency crisis, tumbling stock market and rising inflation — is also hitting the South Korean economy hard. However, this industrial powerhouse has the domestic means to climb out of the doldrums.
Read more
Translated by Candice Chan on 27 December 2019

A Chinese saying goes that when a snipe and clam fight, it’s the fisherman that benefits (鹬蚌相争，鱼人得利 yu bang xiang zheng, yu ren de li). In the case of the China-US trade war, Taiwan is that fisherman. Taiwan clearly has far less economic and political influence than mainland China, and it has been passively absorbing the spillover effect from the trade war. But, while Taiwan’s economy has definitely been hit, it is also benefiting, especially on the political level.

In March 2018, mainland Chinese media reported comments by Taiwanese economist and the current Governor of the Central Bank of the Republic of China (CBC), Yang Chin-long, that Taiwan’s involvement in the global value chain was as high as 67.6%, and US trade protectionism against mainland China would result in a 0.8% reduction in Taiwan’s production. That reduction would be 1.8% if mainland China retaliates. But while Yang did not say that “Taiwan is hurting”, that was the media headline in mainland China.

... in the first half of 2019, Taiwan’s exports to the US went up by US$4.2 billion, making it the largest beneficiary in the trade war.

Over a year later, this is not totally the case. The first way that Taiwan’s economy is benefiting from the trade war is through trade diversion.

On 5 November 2019, UNCTAD released a report that said US imports from China in the first half of 2019 were down 25% year-on-year, from US$130 billion previously to US$95 billion, due to additional tariffs by the US on China products. While imports to the US from China have gone down, imports from Taiwan, Mexico, the EU, and Vietnam have jumped. At the same time, since the second quarter of 2019, China’s exporters have borne part of the tariffs by lowering prices.

The report added that in the first half of 2019, Taiwan’s exports to the US went up by US$4.2 billion, making it the largest beneficiary in the trade war. Exports from Mexico and the EU to the US increased by US$3.5 billion and US$2.7 billion respectively, while other Southeast Asian countries gained US$1.7 billion. The rest of Latin America, Sub Saharan Africa and the rest of the world gained marginal benefits.

The second way in which Taiwan is benefiting lies in Taiwan funds pulling out of mainland China and returning to Taiwan.

As of July 2019, CBC figures show that the impact of the trade war has prompted 93 Taiwan businesses to return to Taiwan, with investments worth over NTD$452 billion, and an estimated 42,100 jobs created in Taiwan. International media has also reported on this exit of Taiwan businesses. In early 2019, there were reports that Taiwan manufacturers such as Foxconn, Inventec, Quanta, and Compal were either preparing to or had already begun pulling out of mainland China. In mid-November, some media including Nikkei Asia reported that Foxconn founder Terry Gou’s Innolux LCD panel manufacturing business will also be pulling out of mainland China and returning to Taiwan with US$2.3 billion in investments.

On 18 December, the Academia Sinica (Taiwan’s main research institution on the sciences and humanities) published the overall outlook for Taiwan’s economy in 2020. It reported that due to trade diversion, returning Taiwan investments from China, as well as growing semiconductor investments, Taiwan domestic demand has risen. Its economic growth forecast was adjusted up to 2.62% in 2019, and the real GDP growth figure for 2020 is predicted to be about 2.58%.

Closer relations with the US

Furthermore, on 12 June 2019, when former US Deputy Secretary of State Richard Armitage visited Taiwan, Taiwanese president Tsai Ing-wen said Taiwan-US relations are the best they have been in recent years, while Foreign Affairs Minister Joseph Wu said they might be the best they have ever been. This warming of relations can be seen in several areas.

First, US Vice President Mike Pence has affirmed Taiwan’s political values in two separate speeches. In 2018, he said, “America will always believe that Taiwan's embrace of democracy shows a better path for all the Chinese people.” And in a speech this year, he said, “And we’ve stood by Taiwan in defence of her hard-won freedoms... and recognised Taiwan’s place as one of the world’s great trading economies and beacons of Chinese culture and democracy.”

Second, Taiwan is clearly a consideration in the US’s strategic framework. In June 2019, the US Department of Defence released the Indo-Pacific Strategy Report, which said the US has a vital interest in upholding the rules-based international order, and is pursuing a strong partnership with Taiwan.

The US Congress is constantly drawing up new laws to provide a legal basis for establishing relations with Taiwan. In January and March 2018, the US Senate and House of Representatives passed the Taiwan Travel Act allowing high-level officials of the US to visit Taiwan and vice versa. On 31 December 2018, US President Donald Trump signed into law the Congress-approved Asia Reassurance Initiative Act of 2018. The US Senate and House of Representatives also passed the Taiwan Assurance Act of 2019 and the Taiwan Allies International Protection and Enhancement Initiative (TAIPEI) Act of 2019 (commonly known as the Taipei Act) in May and September 2019 respectively.

All these laws protect the US in its support of Taiwan’s existence. Specifically, the intention is to encourage senior US officials to visit Taiwan; to encourage the US to sell arms to Taiwan; to grow US-Taiwan finance and trade relations and resume talks on a bilateral free trade agreement; to get the US to regularly review Taiwan’s diplomatic relations as well as the policies of all countries towards Taiwan, and consider scaling back contact with any country that is damaging to Taiwan; and to support Taiwan’s participation in international organisations.

The Chinese government feels that all the China-related bills passed by the US go against the “One-China” principle, and is a form of meddling in China’s domestic politics. As for the US, it emphasises its “One-China” policy. Two reports released by the Congressional Research Service (CRS)  in 2014 — "China/Taiwan: Evolution of the 'One-China Policy' — Key Statements from Washington, Beijing, and Taipei" and "US-Taiwan Relationship: Overview of Policy Issues" — summarises the One-China policy as: while the US is interested in how the Taiwan issue will be resolved, it will not take a stand on its outcome.

Finally, the US is also helping to boost Taiwan’s military strength. In April 2018, the US State Department gave the go-ahead for American manufacturers to market submarine technology to Taiwan; in July 2019, it approved arms sales worth US$2.2 billion, and another arms sales worth US$8 billion a month later, in August 2019.

At a Christmas celebration on 5 December 2019 at the Taiwan representative office in the US, John J. Norris Jr, managing director of the Washington Office of the American Institute in Taiwan, described 2019 as a milestone year in US-Taiwan relations. And on 1 December 2019, the New York Times ran a piece headlined “China Has Lost Taiwan, and It Knows It”.

In short, as Taiwan's status rises, mainland China is losing its advantageous influence over Taiwan, while whatever influence it does have is increasingly detrimental to itself.