For the first time in over four decades, a China-India skirmish in the disputed Himalayan border region at Galwan Valley has resulted in fatalities, and quite a number at that. Diplomatic efforts are going into overdrive, but a series of suspicions and misperceptions on both sides may see the China-India border conflict escalating even higher. China is already flexing its muscles with military exercises in Tibet. When push comes to shove, who will blink first? 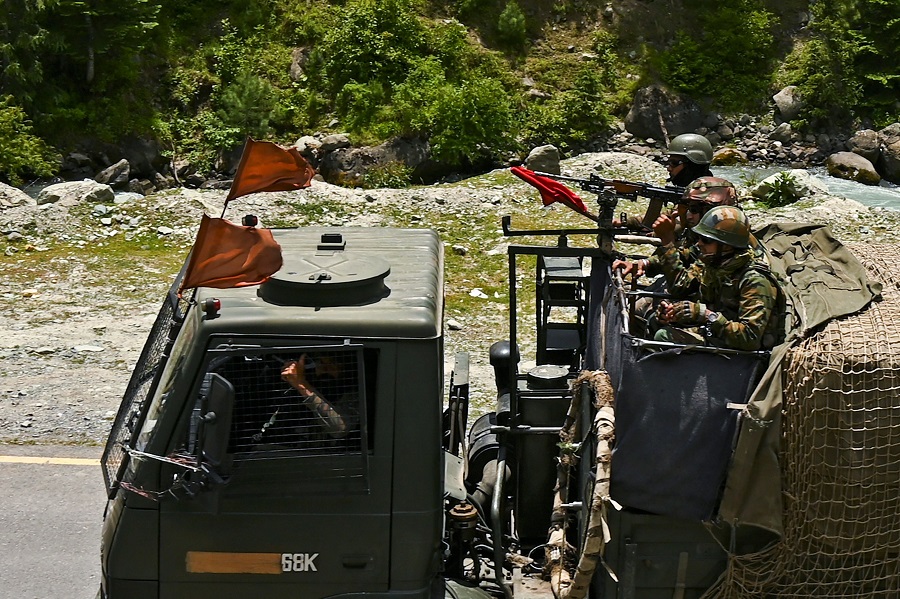 Indian army soldiers ride in a convoy along a highway leading towards Leh, bordering China, in Gagangir on 17 June 2020. (Tauseef Mustafa/AFP)

Grace Chong - 1 July 2022
Masayoshi Son, billionaire head of SoftBank Group Corp. may finally be able to push ahead with launching a US IPO for semiconductor and software design giant Arm Ltd., after wresting control of Arm China back from ousted CEO Allen Wu. It was no mean feat and a saga of twists and turns. But even now, some questions of Arm China’s shareholding and business remain unanswered.
Read more
Translated by Grace Chong on 18 June 2020

On 15 June 2020, a violent face-off occurred between Chinese and Indian soldiers at the disputed border area at Galwan Valley in Ladakh, resulting in the death of 20 Indian soldiers. While China did not announce its casualty number, India alleged that 43 Chinese soldiers were injured or killed. Both sides blamed the other party for instigating the fight, and have deployed additional troops to the border area.

According to a BBC report, Indian Prime Minister Narendra Modi said at a televised address that the sacrifice of Indian soldiers “will not be in vain”. He said that while India wants peace, it is “capable of giving a fitting reply” when provoked.

If the China-India dispute were to spin out of control, it could result in three possible consequences.

During a phone call between Chinese State Councilor and Foreign Minister Wang Yi and Indian Minister of External Affairs Subrahmanyam Jaishankar yesterday (17 June), both parties agreed to “fairly address the serious situation caused by the conflict in the Galwan Valley” and “cool down the situation on the ground as soon as possible”, a Chinese foreign ministry report said.

Wang Yi noted that on the evening of 15 June 2020, Indian frontline border forces had openly broken the consensus reached at the commander-level meeting between both sides, and crossed the Line of Actual Control (LAC) again in a deliberate act of provocation. They even violently attacked the Chinese soldiers who went to negotiate, triggering violent physical clashes that resulted in casualties.

War of words between China and India

Wang Yi urged the Indian side to conduct a thorough investigation, hold the culprits accountable, strictly discipline the frontline troops, immediately cease all provocations and ensure such incidents do not occur again. He reminded India not to “misjudge the current situation” and not to “underestimate China’s firm determination to safeguard our territorial sovereignty”.

On the other hand, the Indian external affairs ministry said in a statement released on 16 June 2020 that the violent face-off happened as a result of “an attempt by the Chinese side to unilaterally change the status quo there”.

Chinese military academic Wang Yunfei said in an article published in The Senstrat (三策智库) that he envisions three possible consequences if the China-India dispute spins out of control. First, the occurrence of an armed clash at certain areas of the disputed border; second, the occurrence of a small-scale war at the western sector of the LAC; and third, India provoking a large-scale war.

China did not want the citizens of both sides to compare their casualty numbers so as to “avoid stoking public mood”... this was “goodwill from Beijing”. - Global Times editor Hu Xijin

The Galwan Valley lies on the China-India border in a disputed area that both China and India claim sovereignty over. China’s objection to India’s recent bridge and road construction project at the area has triggered a face-off between both sides.

Quoting from Indian government sources, a Reuters report said that the violent clash broke out on the night of 15 June when both sides were discussing ways to de-escalate the situation. Both sides fought with iron rods and stones, and no shots were fired. An Indian commanding officer was among the first to be “grievously injured and fell”, while many Indian soldiers died after sustaining injuries and were unable to bear with the cold temperatures at night.

The Indian army had initially reported that a commanding officer and two soldiers had died, but later said in a statement on 16 June that another 17 soldiers had also succumbed to their injuries. They also said that both Indian and Chinese troops have disengaged. This is the first clash with fatalities in the last 40 over years of the China-India border dispute.

As to why the Chinese side did not announce its casualty number, Global Times editor Hu Xijin analysed on 16 June that this was because China did not want the citizens of both sides to compare their casualty numbers so as to “avoid stoking public mood”. He said that this was “goodwill from Beijing”.

India thinks that China is facing increased pressure from the US and would not dare to become enemies with another major power... - Chinese military academic Wang Yunfei

In the same article mentioned earlier, Wang Yunfei revealed that the Chinese side had incurred numerous casualties in the face-off.

He thinks that the following misperceptions could explain why India is increasingly taking a tougher stance on the China-India border dispute: one, India thinks that China is facing increased pressure from the US and would not dare to become enemies with another major power, India; two, as China needs India in order to have a peaceful environment in its backyard and its main strategic directions lie in Taiwan and the South China Sea, it would not have the energy, ability or desire to turn India into a fierce opponent; three, India thinks that its border troops are stronger than China’s and feels confident that it would win a war; and four, India reasons that in the subsequent disputes following the 2017 Doklam standoff, China has always "swallowed the bitter fruit" and is thus weak and can be bullied.

Wang Hongguang, former deputy commander of the People’s Liberation Army’s (PLA) Nanjing military area command said in an article that the incident could end in three different ways: one, top military officials from both sides would intervene and hold an emergency negotiation to de-escalate the conflict, and both sides would disengage; two, a small-scale war would break out to determine the winner but this could likely escalate into a full-blown conflict or even a local war, and the higher-ups of both sides would have to engage in dialogue to defuse the crisis; and three, when India thinks that the time is right, it would declare a large-scale military conflict or even a local war at the border over a relatively long period to gain a greater strategic advantage.

Wang Hongguang thinks that China must make adequate military preparations for all three possibilities, but work towards achieving the first possible outcome.

Prior to this, a major physical clash between Chinese and Indian soldiers had occurred on 5 May at Pangong Tso, injuring dozens of soldiers on both sides.

PLA’s military exercises in Tibet a strong signal to India

Amid the escalating border conflict between China and India, the PLA Tibet Military Command has recently engaged in combat and live-firing drills that involve multiple types of combat forces, sending strong signals to India.

Over a thousand targets of various types were set up to test the troops’ combat effectiveness and assault abilities using various fire strike systems in a high altitude area. Tanks and infantry fighting vehicles were also involved in the exercise, with simulated anti-aircraft attacks on enemy helicopters, making vertical strikes against enemy reinforcements.

Related: China and India say 'no' to Trump's offer to mediate border tensions | Uneasy Dance between an elephant and a dragon: 70 years of diplomatic relations between India and China