Anti-Chinese and anti-Indian sentiment have been stoked by recent escalating incidents along the Line of Actual Control between China and India. While tensions are still simmering, will they boil over into violent clashes if too many cooks spoil the broth? 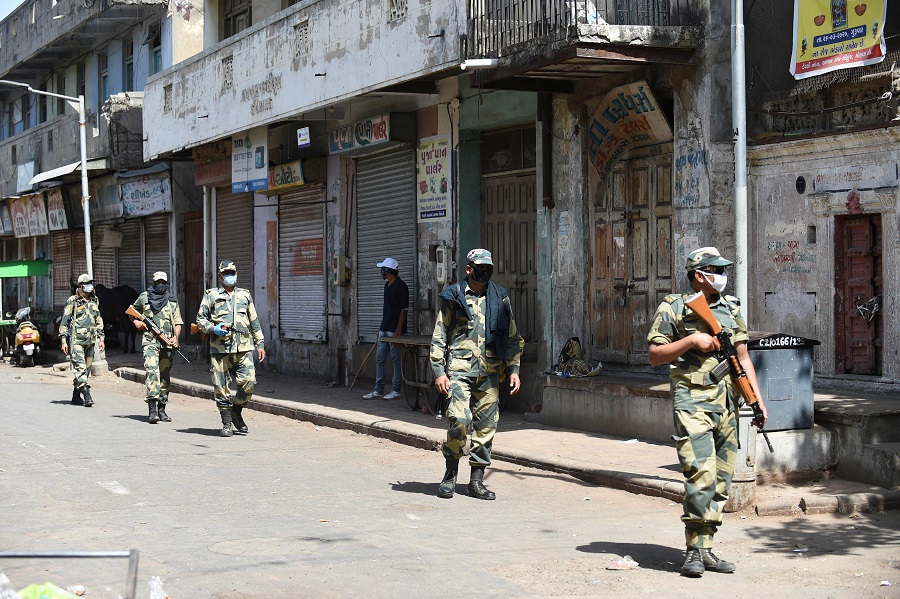 Paramilitary soldiers from the Border Security Force patrol a street during a government-imposed nationwide lockdown as a preventive measure against the Covid-19 coronavirus, in Ahmedabad, India, on 8 May 2020. (Sam Panthaky/AFP)

Grace Chong - 18 February 2021
With the conclusion of the 1st ASEAN Digital Ministers Meeting (ADGMIN) last month and the series of digital policies introduced, ASEAN is ready to move forward on building an integrated digital economy. Even as ASEAN aims to become an important player in the digital global value chain, there are areas where China and ASEAN can work together to achieve a win-win situation. Professor Zhai Kun of Peking University and Yuan Ruichen, member of the research group of the BRI Big Data Innovation Experimental Project, suggest cooperation in areas such as building smart cities, cybersecurity and digital governance.
Read more
Translated by Grace Chong on 4 June 2020

With winter gone and the arrival of spring, snow on the Himalayas has thawed, and intensive border patrols between China and India have begun again. This time, however, China's objection to a road construction project by India near the Pangong Tso (lake) has intensified tensions between the dragon and the elephant. China and India are now engaged in deep confrontation at the disputed Eastern Ladakh area, triggering worries of a repeat of the 2017 Doklam standoff.

On 5 May, a major clash between 250 Chinese and Indian soldiers at Pangong Tso injured over 100, marking the start of this round of confrontation. After border talks failed, both sides deployed more troops to the borders, with China reportedly sending at least 2000 more soldiers to Pangong Tso and Galwan valley, signalling escalating tensions between both sides.

However, the conflict between China and India also gave the US an opportunity to expand its Indo-Pacific strategy.

The China-India border dispute involves an approximately 3,500km border between them. Following the Sino-Indian Border Conflict of 1962, border disputes between both countries occur from time to time, with the 2017 Doklam standoff being the most serious one in recent years (sparked off by China’s attempts to extend a road over the Chinese-Bhutan disputed territory of the Doklam Plateau). China and India were locked in confrontation then for over two months and were on the brink of a border conflict. It ultimately resolved peacefully.

Ever since the confrontation broke out between both parties, the Chinese and Indian governments have both been inclined towards keeping it under control, in a clear indication that neither party wants the situation to spin out of control. Ren Guoqiang, spokesperson for the Ministry of National Defense said on 29 May that both sides can “resolve related issues through the established border-related mechanisms and diplomatic channels”. Over the past week, Foreign Ministry spokesperson Zhao Lijian emphasised four times that the overall situation in the China-India border area is “stable and controllable”.

Zhao expressed on 29 May that there is “no need for a third party to intervene”, while India’s External Affairs Ministry released a statement on 29 May refuting claims of a phone call between Trump and Modi.

However, the conflict between China and India also gave the US an opportunity to expand its Indo-Pacific strategy. After Alice Wells, principal deputy assistant secretary of state for South and Central Asian affairs encouraged India to resist Chinese aggression on 20 May, US President Donald Trump tweeted “We have informed both India and China that the United States is ready, willing and able to mediate or arbitrate their now raging border dispute. Thank you!” a week later on 27 May. On 28 May, Trump even told reporters at the White House that he had spoken on the phone with Indian Prime Minister Narendra Modi over the China-India border dispute and that “he's [Modi] not in a good mood about what's going on with China”.

However, Trump’s “zealous” mediation offer was rejected by both China and India. Zhao expressed on 29 May that there is “no need for a third party to intervene”, while India’s External Affairs Ministry released a statement on 29 May refuting claims of a phone call between Trump and Modi. India Defence Minister Rajnath Singh said in an interview on 31 May that India has rejected Trump’s mediation offer and is currently in dialogue with China on both military and diplomatic levels.

While China and India are attempting to resolve the dispute, both parties continued to deploy additional troops this week and flexed their military muscle by showcasing their naval, air, and land weaponry. Quoting from a military source, US publication Defense News said in a report published on 1 June that China and India were moving heavy equipment and weaponry including artillery guns and combat vehicles to their rear bases in Eastern Ladakh.

Netizens from both countries have also been riled up by what could possibly have been a leaked video of the violent clash between Chinese and Indian troops at Pangong Tso.

Just as India has deployed US-made high-speed boats at Pangong Tso, the People’s Liberation Army troops also showcased its main emergency response forces, the latest 928D patrol boats, at the same area. Following India’s deployment of fighter jets above the disputed area, 22 military aircraft from the Chinese side were also reportedly deployed to the front lines of the China-India confrontation in a rare move yesterday.

Amid the deployment of additional troops from both sides, the Indian government’s low-key stance at the border confrontation garnered criticism from the opposition party this week. Additionally, there has also been an increasing populist pressure in India. With anti-Chinese sentiments on the rise in India, the mobile phone application “Remove China Apps” has already achieved a download of five million times since its launch in India in end May. (NB: Google has since removed the app from the Google Play Store on the grounds that it violates its Deceptive Behaviour Policy.)

Netizens from both countries have also been riled up by what could possibly have been a leaked video of the violent clash between Chinese and Indian troops at Pangong Tso. The short video first went viral on the Chinese internet and Twitter on 31 May. The clip purportedly showing a badly beaten Chinese soldier detained by an Indian soldier provoked an uproar among Chinese netizens. Another photograph of an injured Indian soldier then appeared on the Chinese internet. That same day, the Indian army rushed to put out the fire, saying that the contents of the video were “not authenticated” and that they “strongly condemn[ed] attempts to sensationalise issues impacting national security”.

US Secretary of State Mike Pompeo has also taken the opportunity to fan the flames by reprimanding China for bullying India during a military standoff on their disputed border.

In the face of strong criticism from the opposition, Indian Home Affairs Minister Amit Shah took a tough stance, expressing that the Modi government “will not compromise one bit on this issue”. There has also been a subtle change in attitude in its External Affairs Ministry, which took the initiative to reveal that Trump and Modi had spoken on the phone on 2 June, and discussed the situation on the China-India border. This was contradictory to the cautious attitude it had previously maintained.

Recently, US Secretary of State Mike Pompeo has also taken the opportunity to fan the flames by reprimanding China for bullying India during a military standoff on their disputed border. Quoting from Pompeo’s speech at the American Enterprise Institute think tank, Reuters reported on 2 June that Pompeo thought that China's moving up its troops along the Line of Actual Control showed more of the same heavy-handed behaviour that it has exhibited over the coronavirus, South China Sea and Hong Kong, and “are the kinds of actions that authoritarian regimes take”.

A mature and developed coping mechanism for border disputes between China and India has been established over the many years of conflict between both countries.

Can China and India avoid the repeat of the Doklam standoff? We can expect that as long as both parties are not held hostage by populism, resist US interference, and make no misjudgements, even if small clashes occur occasionally for a period of time in the future, they would still be able to avoid a full-blown conflict and resolve the dispute peacefully like they did in the Doklam standoff.

A mature and developed coping mechanism for border disputes between China and India has been established over the many years of conflict between both countries. This includes measures such as the withdrawal of troops, dialogue, and other technical means, which are expected to continue playing their role of conflict control and management. In a 2 June report, Indian media outlet Dailyhunt quoted government sources saying:  “There has been a token reduction by both sides in some areas. It is just a goodwill gesture.”

China-India bilateral trade amounted to 639.5 billion RMB (S$125.7 billion) last year. In a post-pandemic world filled with great uncertainty, both countries would most probably focus on economic recovery and turn competition between a dragon and an elephant into a cooperative “dance” between the both of them.

Related: Uneasy Dance between an elephant and a dragon: 70 years of diplomatic relations between India and China | India-China relations: Compromises and conflicts amid Covid-19