Northern Chinese mutton soup is rich, hearty and bold-flavoured, standing in sharp contrast to the delicate cuisine of the south. The dish is an emblem of the gruff and big-hearted heroism of civil wars past and the grandeur of the Han and Tang dynasties. Indeed, traces of history are left behind in every drop of a good bowl of mutton soup. 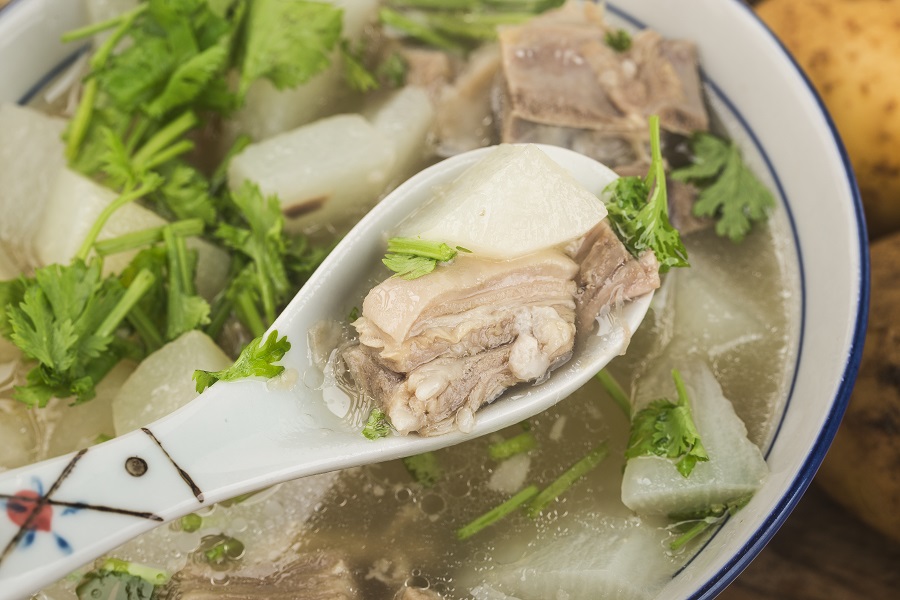 Grace Chong - 25 January 2023
With rumblings of US House Speaker Kevin McCarthy possibly visiting Taiwan in spring, Yang Danxu observes that this will not be the last we see of the “Taiwan card” being played by US politicians as they move into the second half of the current US presidency.
Read more
Translated by Grace Chong on 15 December 2020

To keep warm and nourish themselves in winter, Hong Kongers often have lamb stew made with bold-flavoured ingredients like onion, ginger, soy sauce, and even fermented bean curd and sesame paste. While northerners also enjoy strong-tasting dishes such as braised mutton, stir-fried lamb with scallions, and grilled leg of lamb with cumin, when it comes to the most common preparation of sheep meat, it’s still hotpot or shabu-shabu style, which retains the gamey flavours of the meat. One of these dishes is the mutton soup that southerners tend to avoid. If I had to draw a parallel between clear mutton soup and a dish in Hong Kong cuisine, it would be beef brisket in clear broth — although the mutton soup is a common dish, it is delicious and cannot be replaced by any other delicacy.

During my visits to Beijing in the early 2010s, I would often stay at the newly-built service apartment near Xizhaosi Street (夕照寺), southeast of Chongwenmen. The apartment units were airy and spacious, but I often had to hunt for food elsewhere. There were some traditional eateries nearby, and even a posh Hong Kong-style tea restaurant, but the food at the latter was so-so and the portions barely enough to fill the stomach. Later though, I stumbled on a restaurant serving Shandong cuisine. The restaurant exterior was not particularly impressive and the paint on its beams and pillars was fading and even peeling off. But business was booming so I decided to give it a try.

Looking at the menu, the restaurant was famous for serving Shandong’s Shan County cuisine, and was notably skilled in bringing out Shandong’s southwestern flavours. It was especially proud of its “Shan County century-old mutton soup” (单县百年羊汤).

I asked a waiter what this “century-old mutton soup” was all about. If we counted backwards a hundred years, wouldn’t that be the last days of Emperor Guangxu? Could it be that this pot of mutton soup had already been simmering since the time that Empress Dowager Cixi was seated in the Hall of Supreme Harmony?

The waiter replied that he didn’t know exactly when the soup was first boiled, just that the fire hasn’t been turned off since it was prepared and was always left simmering. He said that the soup was rich, aromatic and really fresh.

I ordered a bowl of soup and completed my meal with two pieces of “Wu Dalang* cake”, a bowl of crunchy cucumber, and a plate of sautéed black fungus with scallions. The soup was served, thick and white with a sprinkle of coriander. It really was fragrant and rich with no hint of gaminess.

“Wu Dalang cake” sounds like a dim sum dish to lure tourists, but they are really just slightly fermented qiangmian (戗面) bread coated with sesame seeds and roasted in the oven. Unlike the regular shaobing (烧饼), Wu Dalang cakes are not crispy, but are incredibly chewy due to the extra flour added to the qiangmian. They have a similar texture to Shandong’s fried mantou slices, except that these are not oily but fluffy, light and refreshing. I paired them with the rich mutton soup and had a very satisfying meal.

I recently visited Xuzhou and had a meal at the hotel restaurant. A mutton gnocchi soup dish was on the menu and I asked my friend if I should order that. My friend, a Xuzhou local, described it as a local dish served unpretentiously in a big bowl. "It is not a presentable dish for an important guest like you," he said.

I told him local dishes are the tastiest ones, otherwise they would not be eaten all the time till they become part of local culinary delights. My friend couldn’t argue with that and so, apart from four exquisite dishes, we also ordered mutton gnocchi soup.

When the mutton gnocchi soup arrived, it would be an understatement to say that it was served in a big bowl — it was more like a big porcelain basin, and the portion was too much for even three or four people. The soup was thick and white, piping hot, and incredibly fragrant. The dish even came with a plate of fried mutton tallow, and coriander.

My friend said that if I was up to it, I could add some fried tallow into the soup for added fragrance. So, I added some and my bowl of soup immediately became a colourful delight: it had big chunks of creamy white mutton, lumps of pale yellow gnocchi, a sprinkle of crisp green coriander, and mutton tallow that became bright red when dissolved. The flavours and chewy texture of the gnocchi soup created a riot of flavours in my mouth and I was immediately reminded of Shan County’s century-old mutton soup.

Epitome of bold spirit of the north

Standing at the junction of four provinces, Xuzhou is situated southwest of Shandong, near Shan County, near Mount Liang** (梁山泊) where heroes gathered, and also in close proximity to Mangdang Mountain, where Han dynasty founding emperor Liu Bang slewed a serpent with immortal prowess and greatly impressed his followers. Thinking back, when Liu Bang held a banquet for his comrades and sang the Song of the Great Wind (《大风歌》), and when the heroes of Mount Liang ate meat and downed wine, I am sure they drank mutton soup as well.

Drinking this rich and hearty mutton soup, I couldn’t help but feel that it represented the bold spirit of the northerners, and the grandeur of the Han and Tang dynasties, which is completely different from the delicate and refined flavours of the south.

Taking ourselves back to the Tianbao era when Emperor Xuanzong of Tang reigned, and thinking about the times when poets Li Bai, Du Fu, and Gao Shi toured the region freely on the backs of horses, apart from eating hunted wild game meat, I bet they often drank mutton soup as well.

In a poem about an autumn hunting trip in Mengzhu (《秋猎孟诸夜归置酒单父东楼观妓》), Li talked about riding on gallant horses and hunting with his bow fully drawn when the grass withered, the eagles were in the air, and the foxes and rabbits were plump. In a poem about his past travels (《昔游》), Du recounted his travel experiences with Li and Gao in Shanfu Tai, reminiscing about the winds and clouds, and the morning frost in Daze that stirred up Du's strong emotions. He also described in another travel poem (《壮游》) about how the poets had toured the states of Qi and Zhao, leading a wild and carefree life.

The places that these poems mentioned, such as Mengzhu, Shanfu Tai, and Daze, are all near the Xuzhou of today. My friend brought me around the area, and we stopped along the way to drink rich mutton soup at various places. If my guess can be confirmed, perhaps the Shandong restaurant I visited in Beijing should pride itself on selling a “millennium-old mutton soup” instead.

*Wu Dalang is a fictional character in two Ming dynasty novels The Plum in the Golden Vase and Water Margin. He was portrayed as a short and ugly pancake seller who was murdered by his adulterous wife Pan Jinlian.

**In the Chinese classical novel Water Margin, Mount Liang (or Liangshan Marsh) is the place where 108 outlaws gathered during the Northern Song dynasty.

Related: Beijing’s instant-boiled mutton and sweet memories of childhood days in Taiwan | Above Michelin: These professors would rather have Hakka pork belly with preserved mustard | Art and history in a bowl of Suzhou noodles