Chinese academic: Banning all CCP members from the US is to give up hope on China

Chinese Communist Party (CCP) members and their families may soon be banned from travelling to the US, while there are other indications that the CCP is becoming a target for the US in a new global competition of ideology. Zaobao correspondent Yang Danxu examines the signs of worsening US-China relations. 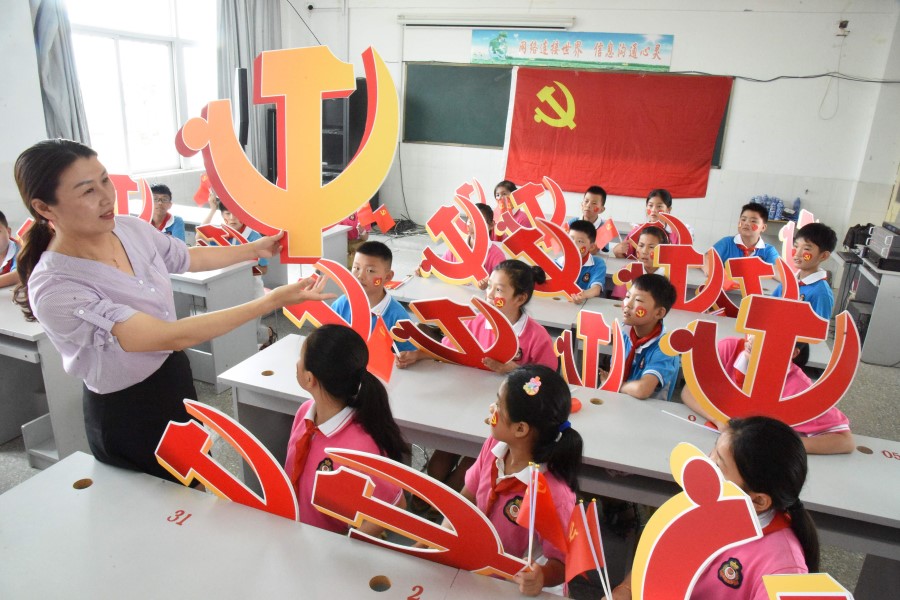 In this file photo a teacher and her students pose with Communist Party emblems during a class about the history of the Communist Party at a school in Lianyungang, in China's eastern Jiangsu province, 28 June 2020. (STR/AFP)

Candice Chan - 18 May 2022
The Chinese government has recently announced plans to establish a unified national market that is highly efficient, standardised, open and competitive. It would break down walls, raise the standards of the business environment within China and act as a buffer against external pressures. While the intention is good, NUS academic Lu Xi points to possible drawbacks and challenges.
Read more
Translated by Candice Chan on 17 July 2020

Informed sources quoted in American media said the Trump administration is considering a sweeping ban on travel to the US by Chinese Communist Party (CCP) members and their families. The move — aimed at pressuring China — would exacerbate tensions between the two nations, but has gained half-mocking “likes” from China’s internet community.

The New York Times (NYT) on 15 July reported that this draft presidential proclamation could also authorise the US government to revoke the visas of party members and their families who are already in the country, leading to their expulsion, while also limiting travel to the US by members of China’s military and executives at state-owned enterprises.

However, these sources told the NYT that details of the plan have not yet been finalised, and US President Donald Trump might ultimately reject it.

... most Chinese officials are CCP members, including the Chinese ambassador to the US. If the US imposes a ban, it would be “as good as breaking diplomatic relations”. - Wu Xinbo, Fudan University

The US had earlier proposed limiting travel to the US by Chinese officials as a punitive measure over various issues, including human rights issues in Xinjiang. On 14 July, Trump signed the Hong Kong Autonomy Act, adding to China-US tensions. Chinese Vice Foreign Minister Zheng Zeguang on 15 July summoned US ambassador to China Terry Branstad to voice China’s opposition to the Hong Kong Autonomy Act and to urge Branstad to “correct the mistake”. The Act contains similar clauses on a travel ban.

However, a complete travel ban on all CCP members and their families is unprecedented. Some analysts feel this will be the most provocative move by the US against China since the trade war in 2018.

Wu Xinbo, dean of the Institute of International Studies at Fudan University, told Zaobao that most Chinese officials are CCP members, including the Chinese ambassador to the US. If the US imposes a ban, it would be “as good as breaking diplomatic relations”.

Responding at a regular press briefing, Chinese foreign ministry spokesperson Hua Chunying said if the news is true, it is “pathetic”. She called on the US to “refrain from doing more things that disdain the basic norms governing international relations and undermine its reputation, credibility and status as a major country”.

“Most CCP members are not involved in Beijing’s policies, so to impose sanctions on the entire party is like China being unhappy with Trump and imposing sanctions on all Republicans.” - Jude Blanchette, Center for Strategic and International Studies

Some academics say that there will be difficulty in execution, especially in determining party membership. Peking University political studies academic Yang Zhaohui said that many students and visiting academics in the US are party members. “Determining who are party members and whether to expel them all is a big question for the feasibility of this policy.”

In China, CCP membership is a part of life for many people. As of the end of 2019, there were 92 million CCP members in China, with many from the business, academic, and arts sectors. Being a party member is even a useful “calling card” for job-seeking university students.

One netizen mockingly thanked Trump for helping with China’s anti-corruption effort, while others gloatingly wrote “corrupt officials are trembling” and “let’s see who will quit the party”.

Jude Blanchette, Freeman Chair in China Studies at the Center for Strategic and International Studies in Washington, said, “Most CCP members are not involved in Beijing’s policies, so to impose sanctions on the entire party is like China being unhappy with Trump and imposing sanctions on all Republicans.”

Blanchette felt the move will spark anger in China, because “this is an all-out persecution targeting nearly 10% of China’s population”.

US targeting CCP in competition of ideology

However, this news has gained “likes” from some of China’s internet community, because this would identify corrupt officials whose families have migrated overseas and whose assets have been transferred overseas. One netizen mockingly thanked Trump for helping with China’s anti-corruption effort, while others gloatingly wrote “corrupt officials are trembling” and “let’s see who will quit the party”.

Other signs also indicate that the US is increasingly setting up the CCP as a target of criticism. In an interview on 15 July with The Hill, US Secretary of State Mike Pompeo said if Trump is re-elected, the biggest challenge for his second term will be the CCP.

Johnny Patterson, director of UK human rights organisation Hong Kong Watch, previously described the Hong Kong Autonomy Act as a more calibrated and targeted measure against the CCP than the US revoking Hong Kong's special customs status. He said it will ensure the CCP “feel a direct cost if they continue to violate the basic rights and freedoms of Hong Kongers”.

"Some (CCP) members are milder and tend towards reform. They want China to tread the path of democracy and rule of law. Indiscriminately branding everyone is to completely give up hope on China.” - Prof Yang Zhaohui, Peking University political studies department

Prof Wu Xinbo explained that drawing a line between the CCP and China is to shift the competition of national interests between China and the US into a competition of ideology, which would help Trump to win the support of right-wingers within the US, as well as the US’s Western allies.

Prof Yang Zhaohui said, “The CCP may be powerful, but it is complicated. There are internal differences. Some members are milder and tend towards reform. They want China to tread the path of democracy and rule of law. Indiscriminately branding everyone is to completely give up hope on China.”

The US on 9 July imposed sanctions on four Chinese officials, accusing them of human rights violations against the Uighur Muslim minority. The sanctions were imposed under the Global Magnitsky Human Rights Accountability Act, a federal law that allows the US government to target human rights violators around the world with freezes on any US assets, US travel bans and prohibitions on Americans doing business with them. Xinjiang's Communist Party Secretary and member of the CCP Politburo Chen Quanguo is the highest-ranking Chinese official to be hit with these sanctions.

And on 15 July, US Secretary of State Mike Pompeo said the US would impose visa restrictions on Chinese companies that facilitate human right violations. This includes employees of technology companies such as Huawei, "that provide material support to regimes engaging in human rights violations and abuses globally."

Related: National security law for Hong Kong: Will America's ‘smart sanctions’ work against China? | Is China the 'big bad wolf' the US has made it out to be? | China and USA: Friends or foes