China has limited retaliatory actions against the US, according to Chinese academics. What are China’s options, and will it dance to the US's tune and fall into 'Trump's trap'? 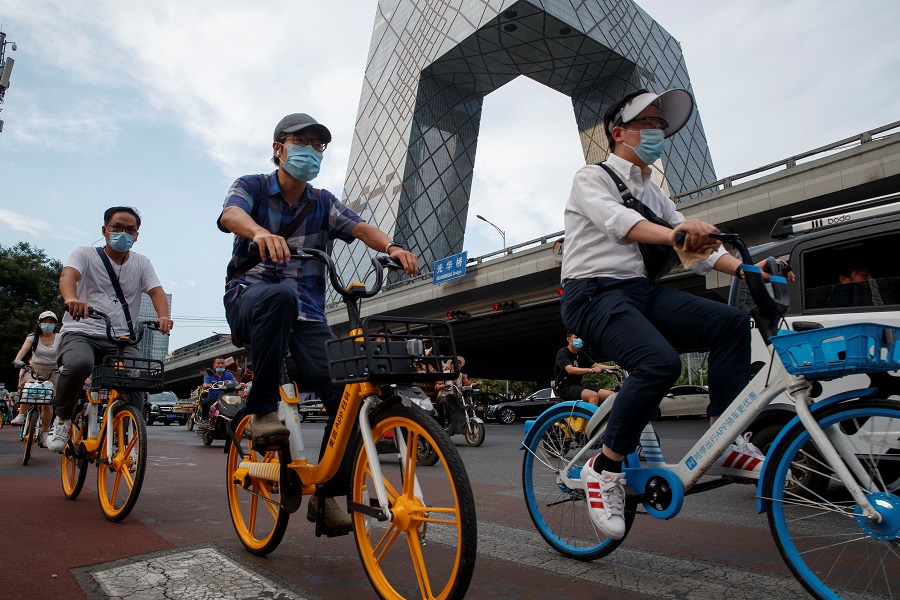 People ride shared bicycles past the CCTV headquarters in the Central Business District in Beijing, China, on 4 August 2020. (Thomas Peter/Reuters)

Grace Chong - 30 January 2023
Amid ongoing tensions, a high-level visit by US Secretary of State Antony Blinken to China in the coming week shows hope for improved relations between the two economic powerhouses. Zaobao correspondent Yu Zeyuan notes that while the meeting may not produce practical results, it is a much needed exchange to manage and control China-US relations from worsening.
Read more
Translated by Grace Chong on 11 August 2020

The US has recently stepped up pressure on China on the issues of technology, Hong Kong, and Taiwan. Interviewed Beijing academics pointed out that China faces  limited options to strike back and warned Beijing to stay alert and avoid falling into “Trump’s trap”.

US Health and Human Services Secretary Alex Azar arrived in Taiwan on 9 August, marking the highest-level visit by an American cabinet official since 1979. Azar said he was in Taiwan to convey “a message of strong support and friendship from President Trump” and went on to praise Taiwan’s response to Covid-19 as among the “most successful in the world”. Activating the “Taiwan card” to contain Beijing would be another of the US’s recent tough moves against China.

US President Donald Trump has played on emotions when dealing with China-US relations because of domestic political needs, and is pushing China-US relations towards the point of no return. - Professor Zhu Feng, Nanjing University

Since August, the US has been targeting China by imposing sanctions on 11 top Hong Kong and mainland officials to punish Beijing for implementing a national security law on Hong Kong. It has also threatened to ban TikTok, TikTok’s parent company ByteDance, and Tencent, which owns WeChat.

Professor Zhu Feng, dean of the School of International Relations at Nanjing University, told Lianhe Zaobao that US President Donald Trump has played on emotions when dealing with China-US relations because of domestic political needs, and is pushing China-US relations towards the point of no return.

“Trump needs a talking point. He needs to create a major conflict between China and the US to show his people that he is the only one capable of acting tough against the Chinese...” - Professor Zhu

Facing threats and aggravating tensions from the US, Prof Zhu said China “does not have to dance to the US’s tune” because “the more China reacts, the more excuses it would give to the US”.

“Trump needs a talking point. He needs to create a major conflict between China and the US to show his people that he is the only one capable of acting tough against the Chinese. He wants to turn China into a major global crisis and forge domestic consensus by creating an external threat,” Zhu said.

Zhu warned that China is now “facing a Trump’s trap that could be extremely serious and dramatic.” And if China dances to the tune, it would definitely fall into the trap.

With three months to go until the US presidential election, Prof Zhu believes that if China makes few retaliatory moves now, it would help the future US government to stabilise and improve China-US relations.

Some observers noted that Beijing is not aiming for reciprocity in retaliation, and in fact, has no cards to play due to huge power gaps in various areas.

Professor Shi Yinhong of Renmin University of China’s School of International Relations agrees. He told Lianhe Zaobao that China’s tit-for-tat retaliatory actions have “proven futile”. “China’s countermeasures are limited. In fact, they could be falling right into the trap of Trump’s team and the hawkish Americans,” he said.

Based on Beijing’s latest countermeasures in the new round of China-US competition, China is reducing its “tit-for-tat” or “fight to the end” measures like it did during the trade war. Some observers noted that Beijing is not aiming for reciprocity in retaliation, and in fact, has no cards to play due to huge power gaps in various areas.

The US still dominates high-tech industry

Beijing announced on 10 August that it would sanction 11 Americans, including US senator Marco Rubio, who have “behaved badly on Hong Kong-related issues”. However, in response to Azar’s Taiwan visit and the TikTok tech war, apart from protesting through diplomatic channels, sending fighter jets across the Taiwan Strait median line, and expressing harsh criticisms, Beijing has yet to retaliate with more concrete measures.

It is not unprecedented for US cabinet officials to visit Taiwan, and the move is still some distance away from overstepping Beijing’s bottom line. - Professor Shi Yinhong, Renmin University of China

Prof Shi said it is not unprecedented for US cabinet officials to visit Taiwan, and the move is still some distance away from overstepping Beijing’s bottom line. Hence, the mainland has merely repeated past responses. As for the US’s extensive suppression of Chinese high-tech enterprises, Shi said there is not much that Beijing can do.

“China’s overall strength is still incomparable, and this is the fundamental reason why the US dares wantonly target Chinese enterprises.” - Hu Xijin, Global Times editor

For China to impose tough sanctions on US enterprises in China would run counter to the expansion and opening up it needs during such difficult times, explained Prof Shi. Also, the US still holds the key to many vital parts of the Chinese high-tech industry, which makes it difficult for China to impose countermeasures of the same effect against the US.

Global Times editor Hu Xijin acknowledged in a recent Weibo post that it is a reality that China faces limited options to strike back at the US. “China’s overall strength is still incomparable, and this is the fundamental reason why the US dares wantonly target Chinese enterprises,” he said.

Chinese netizens have called for retaliation against US enterprises such as Apple Inc in response to the US threat to ban TikTok. But others have reminded that to sanction a US enterprise that uses numerous China-made parts is no different from committing suicide, which could worsen unemployment issues in China.

Will China retaliate in other ways? Prof Shi thinks that China’s options include: abolishing the phase one trade deal; downgrading diplomatic relations to a chargé d’affaires level; and publicly announcing that the UN Security Council Resolutions on North Korea should be revised or China will no longer execute it. However, he notes that there is currently “no sign that the Chinese government is planning to do so”.

Chinese officials have also recently expressed their wish to not let China-US relations worsen. Chinese State Councilor and Foreign Minister Wang Yi, as well as Politburo member and director of the Office of the Central Commission for Foreign Affairs Yang Jiechi have both made such calls. The former told Xinhua News Agency in an interview that China is ready to “make cool-headed and sensible response[s] to the impulsive moves and anxiety of the US side”, while the latter published an article saying, “China is always open to dialogue and communication with the United States. The two sides should enhance cooperation through communication, and properly address differences through dialogue.”

Prof Shi said, “I don’t think the war of words has ended, but it has become more civilised. There weren’t many tit-for-tat countermeasures from China in the past, and there will be less in the future. But this is not enough to change the fundamentals of China-US relations.”

Besides relaying its intentions to the US, Prof Zhu said China is also making it clear to the anxious international community that it rejects a “new Cold War” with the US, and is unwilling to damage China-US relations to the point of no return. China will not dance to Trump’s tune.

Related: Will TikTok and China continue to embrace the world despite US pressure? | Is China the 'big bad wolf' the US has made it out to be? | Playing the China card — how far will Trump go? | An eye for an eye: Souring China-US relations at point of no return?