Playing the China card — how far will Trump go?

As US-China relations continue to deteriorate, political scientist Zhu Zhiqun worries that there is a real risk of an accidental hot war breaking out if cool heads do not prevail. While China must do its part not to react disproportionately, the US is very much in the driver’s seat when it comes to de-escalating tensions. With China hawks at the helm in the Trump administration and elections just months away however, US-China relations are set for a rocky road ahead. 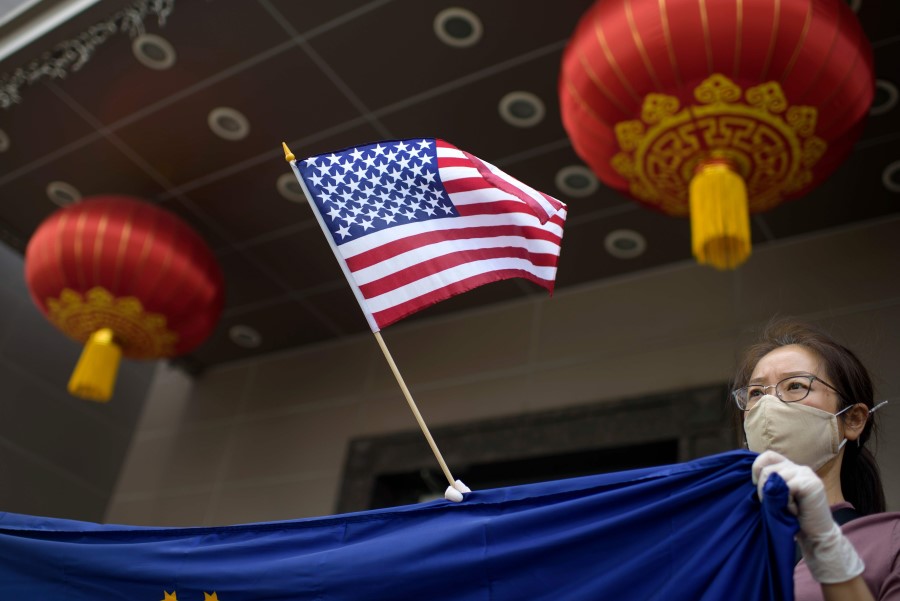 A protester holds a US flag outside of the Chinese consulate in Houston on 24 July 2020, after the US State Department ordered China to close the consulate. (Mark Felix/AFP)

Candice Chan - 30 January 2023
A mall in Shenzhen came under fire for putting up white lanterns with black text as part of its Chinese New Year decorations, while an “ugly” rabbit-shaped light decoration was removed from another mall in Chongqing. Academic Zhang Tiankan muses on tradition and innovation, and the evolution of traditional decorations.
Read more
Translated by Candice Chan on 5 August 2020

US-China relations are at their worst in decades, and both sides are responsible for the recent dark clouds. The US has been giving China grief over issues such as Hong Kong, the South China Sea, Taiwan, and Xinjiang. The Trump administration keeps stirring up disputes: limiting normal communication, ending the Fulbright Program in China, and suddenly ordering the closure of the Chinese consulate in Houston within 72 hours.

Even if China does not want to engage in a tit-for-tat exchange, in the face of domestic pressure, the Chinese government has to respond appropriately. But with the Trump administration determined to hit out at China, any countermove by China will only rile the China hawks in the US. With this vicious circle, the outlook for bilateral relations is worrying.

Pompeo’s speech was nothing new; besides, the main objective of the US in establishing relations with China in the 1970s was not to get China to democratise.

At the moment, the hawks are in full control of the Trump administration. Following several senior officials, US Secretary of State Mike Pompeo recently spoke from the Richard Nixon Presidential Library and Museum on US policy towards China. He declared that since the time of Richard Nixon, US policy towards China has failed in not transforming China into a democracy. Pompeo’s speech was nothing new; besides, the main objective of the US in establishing relations with China in the 1970s was not to get China to democratise. Nevertheless, Pompeo’s speech clearly shows the Trump administration’s tough policy towards China.

China may not go all the way in being confrontational

Now, China and the US are decoupling in some areas, and the competition is getting more intense, without being an all-out Cold War. Bilateral relations are not yet at the lowest, and there is still room for the US and China to work together. As long as the leaders of both sides are willing, there is still hope to salvage bilateral relations. In this tussle, China is on the defensive; the US is stronger and is usually the first to act. In this sense, US-China relations are very much dependent on the US.

China’s development in recent years has led many people to worry about China’s future, and its relationships with other countries. The lack of transparency during the initial stages of the coronavirus outbreak, the national security law for Hong Kong, and the “training centres” for Muslims in Xinjiang — all this has significantly reduced other countries’ good feelings towards China, while China’s pro-active, aggressive style of diplomacy has been called “wolf-warrior diplomacy”.

In the latest tussle between China and the US, the US is also engaging in wolf-warrior diplomacy. In a return to Cultural Revolution-style language, China’s foreign ministry called Pompeo a “public enemy of mankind”, while Pompeo, as the US’s most senior diplomat, is not thinking of using diplomacy to handle the differences between both countries, but is lashing out at China’s ruling party almost every day, leading to a more rapid deterioration in bilateral relations.

China may not go all the way in being confrontational; in some ways, it may even give in, for two main reasons. First, China does not want to damage US-China relations, nor can it afford to fall out completely with the US. Second, China will wait patiently for the results of the US presidential election in November, then decide on its next step. Chinese ambassador to the US Cui Tiankai recently mentioned that there is practically no high-level exchange between China and the US, which is dangerous. US Defence Secretary Mark Esper said he hopes to visit China by the end of the year — China should seize the opportunity and initiate high-level communication and exchanges with the US.

The Trump administration has used tactics such as weakening alliances and cutting down on intelligence sharing, to force its allies to choose sides...

Retired Harvard professor Ezra Vogel recently warned of the possibility of armed conflict between China and the US. Vogel represents the voice of rationality in the US. Other similar voices include former US ambassador to China Max Baucus, and former US State Department officials Susan Shirk and Daniel Russel. Unfortunately, such voices are too few now. Vogel probably issued his warning because he is worried about the current situation. US and China have recently stepped up military activities in the South China Sea and the Taiwan Strait, so the situation is becoming increasingly dangerous and the chances of a spark setting off a major blast is growing.

... Pompeo made a whirlwind visit to Israel, ostensibly to discuss pressing issues such as Iran with Israeli leaders... why did he have to risk flying to Israel for something that could have been done over the telephone or a video conference?

The worsening of US-China ties has had an enormous impact on both countries’ relations with third parties, especially US allies and other countries with close ties with both the US and China. The Trump administration has used tactics such as weakening alliances and cutting down on intelligence sharing, to force its allies to choose sides; however, as China is the largest trading partner for many countries, these countries do not want conflict between China and the US, and are unwilling to pick a side.

In May this year, as the coronavirus swept the world, Pompeo made a whirlwind visit to Israel, ostensibly to discuss pressing issues such as Iran with Israeli leaders. But on closer consideration, why did he have to risk flying to Israel for something that could have been done over the telephone or a video conference?

Israeli media revealed that Pompeo’s main objective was to deliver an in-person warning to Israel not to work with China. After its initial success in fighting the coronavirus, China is actively developing a vaccine. China’s top leaders have announced that if the vaccine is successfully developed, it will be given to the world as a public good.

The US has long been wary of China’s investments in Israel, especially its investments and management of the new Haifa port, thinking that China will use them as points to gather US military intelligence. The US does not want Israel to provide technology to China. Right now, China seeks to work with other countries to fight the coronavirus, but the US feels that a lot of technology can be used for both military and civilian purposes. With the coronavirus adding to the rivalry, the US is even more apprehensive about possible technological cooperation between China and Israel, which is why Pompeo went to Jerusalem to personally put pressure on the Israeli government.

Before the election, the Trump administration will play any cards it has without any strategy, and may even take a risk and create an incident in the Taiwan Strait or South China Sea to provoke China.

With the coronavirus out of control in the US, Trump’s hopes of re-election are slim. To maintain his base and keep his supporters from shifting loyalties, Trump and the hawks have been making frequent moves to attack opponents and China, to change the tide. Before the election, the Trump administration will play any cards it has without any strategy, and may even take a risk and create an incident in the Taiwan Strait or South China Sea to provoke China.

China’s response has to be appropriate. It does not have to dance to someone else’s tune; it has to maintain a strategic steadiness. It should not underestimate the intent of the US hawks in wanting to damage US-China relations, but neither does it have to be too pessimistic or disappointed.

The Trump administration’s decisions, including pulling out of the World Health Organization and ending the Fulbright Program in China, go against the beliefs and interests of the US. The next administration will likely correct these errors, and normal competition and cooperation between the US and China will resume. The priority is for both sides to keep calm and not antagonise each other, to avoid a catastrophe.

Related: Should China station fighter jets in the South China Sea? | 180 years later, China is still an outsider to the Western-led world order | Will China and the US fight another wrong war, with the wrong enemy, at the wrong place and time?