Discrimination against those who have had Covid-19 doesn’t only happen among neighbours and friends, but at the workplace and between localities too, says Zaobao correspondent Chen Jing. This discrimination is based on irrational fear and stems from China’s tight zero-Covid measures. 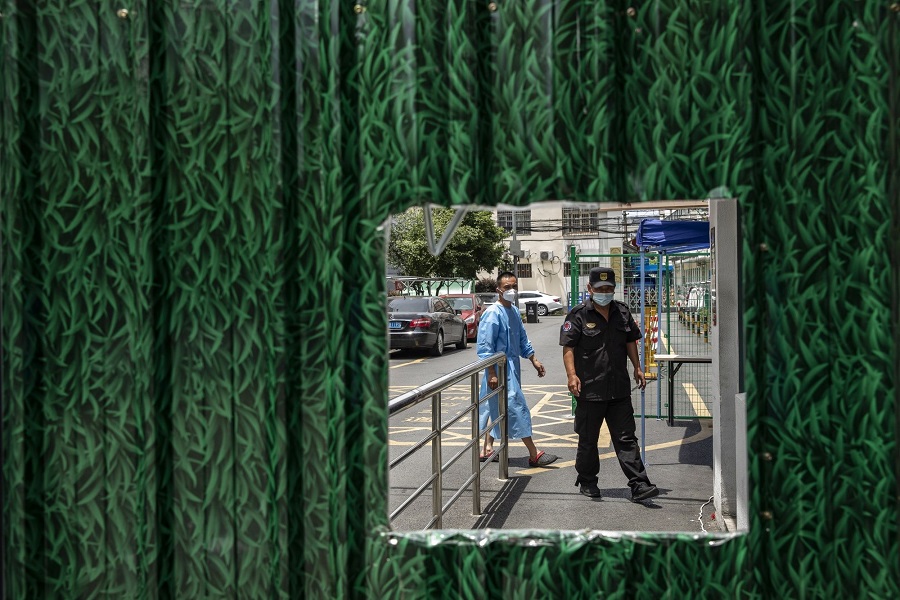 ​A security guard and a volunteer behind a fence surrounding a residential neighbourhood placed under lockdown due to Covid-19 in Shanghai, China, on 6 July 2022. (Qilai Shen/Bloomberg)

Grace Chong - 25 January 2023
With rumblings of US House Speaker Kevin McCarthy possibly visiting Taiwan in spring, Yang Danxu observes that this will not be the last we see of the “Taiwan card” being played by US politicians as they move into the second half of the current US presidency.
Read more
Translated by Grace Chong on 7 July 2022

Recently, an elderly resident from my block asked in our chat group if anyone had received her box of Chinese bayberries by mistake.

Her neighbour replied that they had them and would send them over shortly. Unexpectedly, the elderly woman said, “You guys tested positive before; I’m not sure if I'd take it.”

An awkward silence fell on the chat group. The neighbour’s household tested positive for Covid-19 in early April but had mild symptoms. After a two-week quarantine, they fully recovered. No one paid any attention until the elderly woman blurted out her concerns.

A while later, the elderly lady's neighbour sent a short video to the chat group — they had left the bayberries outside the elderly lady’s door and disinfected the box. They said that the family has been testing negative since April, and that they were not infectious and were “all healthy”. Only then did the elderly woman apologise, “I didn’t know the situation, sorry for the trouble.”

Since the Shanghai pandemic broke out, this is my first taste of misgivings directed at those who have recovered from the infection. The neighbour's calm response seems to suggest that this is probably not a new phenomenon. The stigma of Covid does not only permeate everyday life, but work life too.

Discrimination at the workplace

Chinese media reported this week that job seekers who have had Covid are finding it difficult to find employment in Shanghai. Whatever the position may be — electronic factory worker, security guard, courier sorter — they are told that the company will not hire “people with a history of Covid-19 infection or people who have been treated at makeshift hospitals”. Some companies even want to see the applicant’s PCR records in the last two months.

Companies in Shanghai have just emerged from the trauma of the lockdown — even if they have a hiring crunch, how many enterprises are willing to take the risk?

Lawyers and doctors affirm that Covid discrimination is unjustifiable, whether from a legal or medical standpoint. But people know that employers are not doing this out of ignorance; it is based on the concern that recovered Covid-19 patients can get reinfected.

Government policy dictates that if one employee tests positive, even if they are not infectious, the company may still have to suspend work and production. Companies in Shanghai have just emerged from the trauma of the lockdown — even if they have a hiring crunch, how many enterprises are willing to take the risk?

And it is not just those who have recovered from Covid-19; Shanghai with its recent spurt in infections is being discriminated against. Although lockdown and restrictions were lifted about a month ago, a Shanghainese friend had to cut short her trip as a hotel refused to check her in because the no-Shanghainese-guest measure is still in force.

Individuals avoid contact with recovered Covid patients in case they have to be isolated if these people test positive again; companies do not hire those who have been to makeshift Covid-19 hospitals to reduce the economic risk of having to shut the entire factory for one positive case; communities do not take in residents from cities that previously had outbreaks to reduce the chances of officials losing their positions if the virus spreads. The virus is scary, ditto the restrictions in movement, economic losses and political consequences.

As early as the outbreak in Wuhan, there was already discrimination against those who recovered and those from Wuhan. Two years later, even though the virus is milder, most Chinese are vaccinated, and more is known about the pandemic, there are no signs of the discrimination ebbing. With new waves emerging this year, more face discrimination as well as tighter restrictions.

After recognising the adverse impacts of the lockdown, the authorities recently started relaxing the control measures, including reducing testing requirements for people entering China from several countries, shortening the quarantine period for entry, and doing away with the long-criticised asterisk on the travel card (通信行程卡). On 6 July, Beijing — which had always been on strict defence when it comes to other regions — announced easing requirements for those entering the capital from out of town, as well as plans to resume direct international flights to Beijing.

Tough measures have not all been eased

Yet, restrictions implemented in various regions have not been eased. From this month, Xi’an — which has seen a new wave of the virus — will implement one week of temporary control measures and shut several public venues, and suspend activities including dining in and performances. Shanghai also saw a rebound in local cases, prompting fresh rounds of mass testing and suspension of operations for karaoke venues.

If there is no fundamental shift in the overall pandemic policy, more areas and people will become victims of pandemic discrimination.

The BA.5 Omicron variant that recently sparked a fresh wave in Singapore has also entered China, and it is spreading in Xi’an and Beijing. The increased transmissibility of the variant means growing difficulty in maintaining zero-Covid. If there is no fundamental shift in the overall pandemic policy, more areas and people will become victims of pandemic discrimination.

As employment discrimination of recovered Covid-19 cases became a hot topic, several state media including People’s Daily Online, as well as experts and academics, took issue with the unfair treatment. Employment discrimination is wrong, but if the blame is laid only on employers without addressing the elephant in the room — the stigma of the virus — this will not help to break the current chain of discrimination, nor will it ease the pressure on companies and the entire economy.

Related: Post-lockdown Shanghai is as tense as ever | Covid-stricken Shanghai is down, but is it out? | Reflecting on two months of lockdown in Shanghai | Why China's economists and entrepreneurs are keeping mum about the economy | Stability above all else: Beijing's control measures could stay for rest of year | It takes a mountain of effort to tell the truth about China's economy