Japanese academic: Japan's role in Afghanistan after US withdrawal

Japanese academic Kazuto Suzuki observes conflicting approaches in how the West and China are handling Afghanistan matters after the Taliban takeover. He says while Japan had made some headway in helping to eliminate the Taliban and build up the country, its progress was disrupted by the US's withdrawal from Afghanistan and it now has to redefine its modus operandi in the changed landscape. How can Japan play a role now in building better lives for the people of Afghanistan? 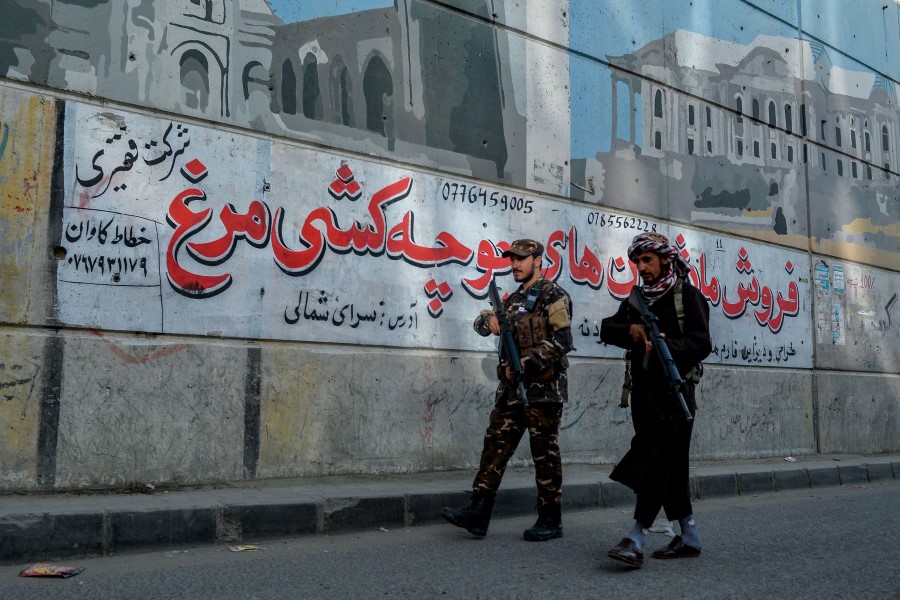 Taliban fighters patrol along a road on the backdrop of a mural painted on the wall of a flyover in Kabul on 26 September 2021. (Hoshang Hashimi/AFP)

Candice Chan - 11 August 2022
China’s Big Fund has come under scrutiny following a series of high-profile corruption investigations involving key persons in the chip industry. The CHIPS Act was also recently signed into law in the US to counter China, which makes things even more difficult for the sector. Zaobao correspondent Chen Jing speaks to industry experts to find out how the Big Fund can come out of this crisis.
Read more
Translated by Candice Chan on 28 September 2021

The withdrawal of US and NATO troops from Afghanistan sent shock waves around the world. This was due in part to the unexpected speed with which the Afghan National Army was defeated and the confusion that accompanied the withdrawal of US troops. Even more alarming, however, was the fact that it created a power vacuum in the centre of the Eurasian continent.

Prior to this, the continued involvement of the US military in the name of the ' war on terror" had eliminated the influence of Russia and China and ensured that a balance of power was maintained between Pakistan and India. The withdrawal of the US military has stoked concerns about the future power balance and fears that China will be allowed to move in.

China's preferred mode of engagement: through the SCO

China’s pressing concern is that Taliban forces promoting Islamic governance will take root in Afghanistan and that the country will become a safe haven for Islamist activists in Xinjiang. As a result, China has closed the Wakhan Corridor, its border with Afghanistan, and has been reticent about extending the China Pakistan Economic Corridor (CPEC) to Afghanistan. (NB: Mansoor Ahmad Khan, Pakistan’s envoy to Kabul, said recently in an interview with Reuters that Pakistan has discussed the possibility of Afghanistan joining the CPEC with the Afghan leadership.)

Instead, China is trying to maintain influence over Afghanistan after the withdrawal of the US military primarily through the Shanghai Cooperation Organisation (SCO) of which Afghanistan is observer and whose members are several of Afghanistan's neighbours. China and Russia held a session of the SCO in Tajikistan, welcoming Iran as a full member. Such a mode of engagement could legitimise Taliban rule and condone a society that imposes tight constraints on people’s lives, including women’s human rights. This would create a situation that is incompatible with the values of Western countries, including Japan.

The US, IMF and World Bank are endeavouring to counter this by freezing Afghan assets and calling for the Taliban to create a more inclusive and non-coercive government. Harsh economic conditions in Afghanistan continue to have a major impact on people’s lives, but Western countries are in no hurry to recognise the Taliban government. They will continue to exert influence on the Taliban and various powers in Afghanistan regarding the way the country should be governed, partly in cooperation and sometimes in confrontation with the SCO countries.

While Japan’s assistance had been achieving significant results, the goal of eliminating the Taliban and turning Afghanistan into a self-reliant nation has been cut short midway through the process due to the withdrawal of US troops.

How Japan can play a role

So what role should Japan play in this process? Japan’s assistance to Afghanistan until now has been focused on infrastructure development and agricultural and rural development on the one hand, and state-building and democratisation on the other, aimed at disarmament, demobilisation, and reintegration (DDR). The approximately US$5.8 billion in aid provided by Japan to date has been favourably received since it has not involved troops, unlike the assistance provided by the US and NATO countries. In addition, the late physician Dr. Tetsu Nakamura of the NGO “Peshawar-kai” brought great benefits to the people of Afghanistan with his irrigation canals and other activities.

While Japan’s assistance had achieved significant results, the goal of eliminating the Taliban and turning Afghanistan into a self-reliant nation was cut short midway due to the withdrawal of US troops. We should not lose sight of these goals, however, nor should we miss out on the chance to achieve the noble aim of resuming democratic nation-building in an Afghanistan that is not under Taliban rule.

...one way would be for Japan to support the freezing of assets by the US and the IMF, use Japanese aid as leverage against the Taliban-led government, and make aid strictly conditional on the recognition of women’s human rights and girls’ education.

At this point, one way would be for Japan to support the freezing of assets by the US and the IMF, use Japanese aid as leverage against the Taliban-led government, and make aid strictly conditional on the recognition of women’s human rights and girls’ education. In addition, Afghanistan is facing a serious food crisis due to rising global prices of primary products and economic turmoil after Taliban domination. Japan could provide food aid in cooperation with Central Asia, Iran and Pakistan, and assess its relationship with the Taliban administration from a humanitarian perspective.

The withdrawal of US troops caused a shift in power structures in the centre of the Eurasian Continent. The Taliban has driven out US and NATO troops and has made clear its stance to eliminate foreign domination. Japan now has a chance to continue its involvement with Afghanistan matters through civilian power, delinked from military intervention.