With the US pullout in Afghanistan leading to chaos, many are questioning if the US has lost credibility around the world. Events in Afghanistan have also sparked discussions in Taiwan about US reliability if fighting breaks out in the Taiwan Strait, so much so that Taiwan premier Su Tseng-chang has spoken out to calm the people's nerves. Lianhe Zaobao speaks with various Taiwanese academics to get a sense of the situation. 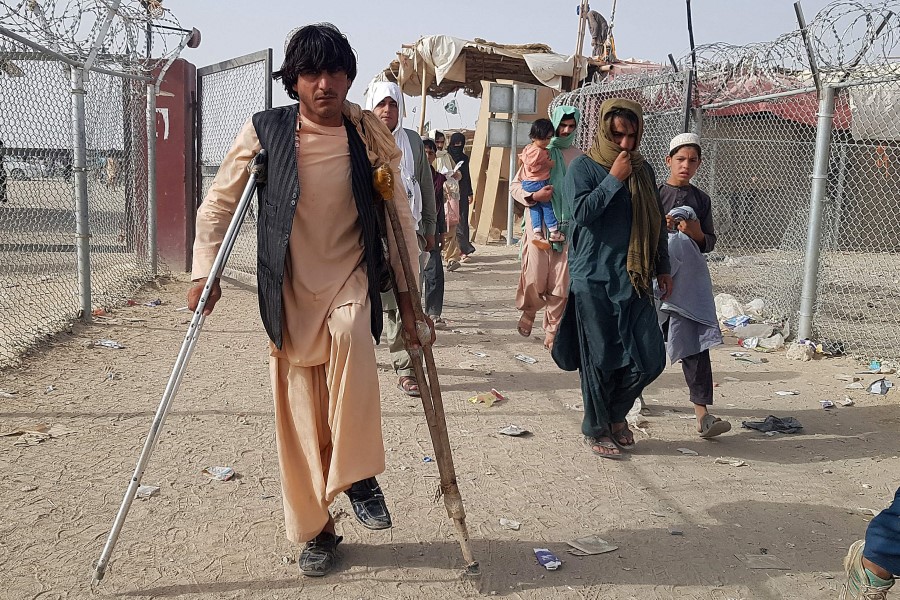 Afghan nationals return back to Afghanistan from the Pakistan-Afghanistan border crossing point in Chaman on 17 August 2021. (AFP)

Candice Chan - 29 June 2022
Hong Kong’s incoming Chief Executive John Lee has nominated the next batch of senior officials, who have been duly appointed by China’s State Council. Many “new Hong Kongers” are gradually making their way into politics through various channels, facilitated by the central government in Beijing, who are not satisfied with the pro-establishment camp in Hong Kong. But can these new Hong Kongers show that they have the interests of all Hong Kongers at heart?
Read more
Translated by Candice Chan on 17 August 2021

With the rapid changes taking place in Afghanistan following the US troop pullout, the credibility of US leadership has taken a heavy hit, and sparked a sense of crisis in Taiwan, amid worries of “Afghanistan today, Taiwan tomorrow”.

Academics interviewed told Zaobao that the hurried US troop pullout from Afghanistan and the fragility of the Afghan government army — built at great expense — shows serious misjudgement by the US intelligence network and calls into question the US’s ability to fulfil its promises. Taiwan will have to work towards peace through ensuring non-independence and restarting cross-strait communications.

The Taiwanese are reflecting on Taiwan’s situation through Afghanistan's experience and there is a general sentiment that “mountains fall and people flee, so it is best to be self-reliant”

The US intervened in the Afghanistan war following the 9/11 terror attacks in 2001, defeating Taliban rule. Twenty years later, with the US announcement of pulling out its troops by the end of August, the Taliban has made a comeback. It swiftly recaptured a majority of territory over the past week, including the capital Kabul, while taking over the government after president Ashraf Ghani left the country on 15 August.

On 12 August, the New York Times noted that going by events in Afghanistan, Taiwan should know that it cannot count on US protection. And on 15 August, veteran media personality Jaw Shaw-kong posted on Facebook describing Afghanistan as an example for Taiwan. He stressed that Taiwan has to depend on itself, and cannot delude itself that the Chinese Communist Party will not attack, or that the US will come to Taiwan’s rescue.

Over the past few days, Taiwan has been talking about “Afghanistan today, Taiwan tomorrow” and questioning the credibility of US leadership. The Taiwanese are reflecting on Taiwan’s situation through Afghanistan's experience and there is a general sentiment that “mountains fall and people flee, so it is best to be self-reliant” (靠山山倒，靠人人跑，还是靠自己最好).

Alexander Huang, an associate professor with the School of Strategic Studies at Tamkang University, said that many thought the US would definitely help to defend Taiwan if fighting broke out in the Taiwan Strait, but this idea is “too romantic”, given that the US could not even handle Afghanistan.

Prof Huang gave a reminder that the China-US competition is a long-term one, but these two nuclear powers would not risk opening fire, or a large-scale military conflict, so the chances of an Afghanistan-style war are low.

Dale Jieh, a veteran diplomat and Taiwan's former representative to New Zealand, told Zaobao that there were serious misjudgements made by the US army intelligence in Afghanistan. In June this year, it was estimated that Kabul would fall six months after the US army pullout at the soonest; one week ago, the estimate was three months; on 13 August, the estimate was adjusted to one month; in the end, the president left Afghanistan after just two days.

He said that the US’s intelligence misjudgments were clear in two instances. First, following its troop drawdown, 6,000 US troops had to be deployed back to Afghanistan to assist its embassy in evacuation efforts. Second, the US spent over US$1 trillion (roughly S$1.36 trillion) providing advanced equipment and training for 300,000 Afghan soldiers over 20 years but the army quickly succumbed in the face of just 75,000 Taliban fighters.

Jieh gauged that US allies have little confidence left in the US after the US military’s performance in Afghanistan. “The US did not even make a verbal promise that it would help defend Taiwan. It only helped strengthen Taiwan’s self-defence capabilities through an arms sale. Many people think that the US will definitely help defend Taiwan, but that is just their wishful thinking,” he said.

He pointed out that over the past five years that Taiwan’s Democratic Progressive Party has been in office, while it has gained political benefits by adopting an “all talk but no action” approach to Taiwan independence and waving the anti-China banner, it has also pushed Taiwan into a dangerous situation. He said, “To solve the current challenge, Taiwan should ensure that it would not walk down the path of Taiwan independence but instead restart cross-straits communications. Then only can both sides of the Taiwan Strait walk towards peace and put the people’s interests first.”

Arthur Ding, a distinguished research fellow at the Institute of International Relations, National Chengchi University, told Zaobao that while the US military intelligence network did make serious misjudgments which also affected the US’s leadership credibility, the situation should not be boiled down to the US being defeated and lacking combat effectiveness, or the conclusion that the US military is unreliable.

He noted, “After all, the US military only intervened in the Afghanistan war and does not rule Afghanistan. The US is unable to resolve Afghanistan’s deep-seated problems. The US insists on strategic ambiguity and hence will not make it clear if it will help Taiwan in the event of a confrontation on the Taiwan Strait. The pro-independence camp in Taiwan thinks that the US military will certainly come to Taiwan’s aid, while the pro-reunification camp believes that the US military will not. But I think that the truth should be somewhere in between. After all, the current strategic position of the Asia-Pacific and the Taiwan Strait is obviously more important than Afghanistan.”

Prof Ding also pointed out that if Taiwan wants to walk towards peace, the most basic principle is not to declare independence. The government should govern the country well and unite the people, so that China’s People’s Liberation Army “will lack strong legitimacy to invade Taiwan when it wants to do so”.

Taiwan premier Su Tseng-chang asserted on 17 August that Taiwan would not collapse like Afghanistan in the event of an attack. During an interview with the Taiwanese media, Su urged Taiwan not to fall into internal chaos or think that Taiwan would become chaotic. He said that Taiwan was not an easy target and the Taiwanese should not belittle themselves. If there was any lesson to take away from Afghanistan, it would be that if a country is in internal chaos, no outside help would make a difference. He stressed that the Taiwanese must believe in their land and their ability to defend it.

Su reminded the Taiwanese that the people of Taiwan had feared neither arrest nor death even when Taiwan was a dictatorship under martial law for 38 years from 1949 to 1987, and it had opened the doors to democracy. “Today, a major power wants to swallow up Taiwan by force, and likewise we are also not afraid of being killed or imprisoned,” he added.

Related: Inroads for China in a Taliban-led Afghanistan? | Will the US abandon Taiwan? | Will China take Taiwan by force within six years? Taiwanese think not and experts are worried | Taiwan would once again be abandoned amid China-US competition