Han Dongping says looking back in history, one should not underestimate the tenacity of the CCP in achieving its aims. At the same time, no matter how determined each actor is, whether it is the CCP, Taiwan or the US, outcomes may not go as intended, and Taiwan may unwittingly be steered towards an end that no one wishes to see. 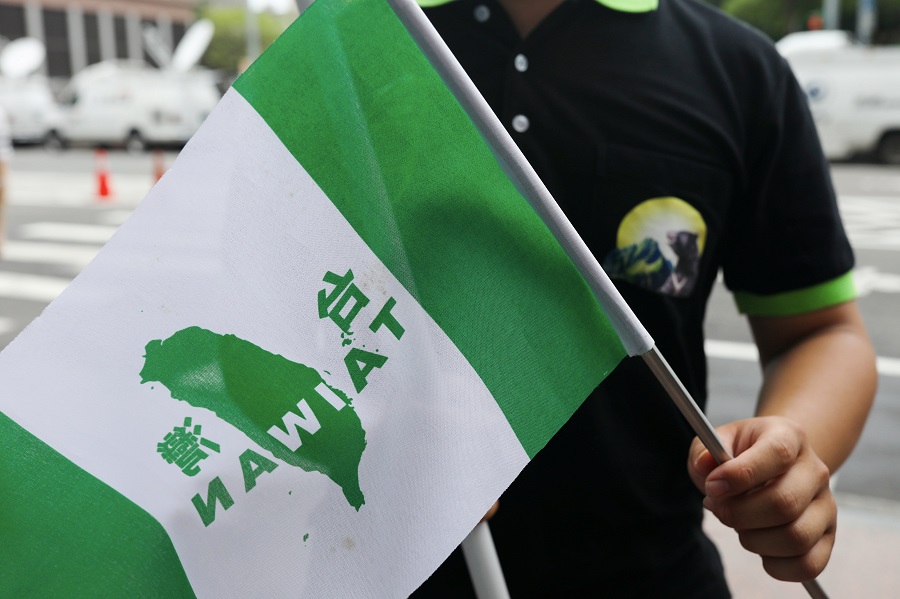 A protester calling for Taiwan independence waves a flag in front of Democratic Progressive Party in Taipei, Taiwan, on 20 May 2020. (Ann Wang/Reuters)

Grace Chong - 5 December 2022
Through the eyes of her cat Pudding, Beijinger Lorna Wei gives a snapshot of her daily life when her residential building went under lockdown last week.
Read more
Translated by Grace Chong on 5 June 2020

A Western philosopher once said, men make their own history, but not in the circumstances of their choosing.*

In 1931, the Japanese staged the Mukden incident (September 18 incident) and occupied northeastern China. Trying his utmost to fight against the Chinese Communist Party (CCP), Chiang Kai-shek ordered Zhang Xueliang, warlord and commander of the Northeastern Army, not to resist the Japanese invasion, thus allowing Japan to easily occupy northeastern China. To Chiang, Japan was but an eyesore — the real thorn in the flesh was the CCP.

In his words: “Die in the hands of the Japanese and we can still be slaves to a fallen country. Die in the hands of the CCP and we are left without a burial ground.” Chiang may have been right, but he neglected the wishes of the Chinese people — they wanted him to fight. Failure to resist cost him the support of the people and even led to the Xi’an Incident — the kidnap of Chiang which was engineered by Zhang and Yang Hucheng to force Chiang into fighting against the Japanese as they disagreed with Chiang’s policy of nonresistance. Strictly speaking, the year 1949 did not mark the year Chiang was defeated — his failure was sealed the very moment he decided to prioritise achieving internal stability over tackling external threats.

The counterproductiveness of Chiang’s and Japan’s policies created a historical environment for the realisation of what they least wanted: the success of CCP in China.

One of the excuses that the Japanese gave for invading China was that the Chinese government was incapable of defeating the CCP. The Japanese politicians were there to form a Greater East Asia Co-Prosperity Sphere and help China destroy the CCP. But history has proven that Chiang’s army was weak and quickly defeated when the Japanese attacked. In a speech he delivered in 1936, Chiang had claimed that the country would fall in three days if it were to resist the Japanese invasion. While Japan did not destroy China in three days, over half of China had fallen over the next three months, and Chiang fled to Chongqing, in southwestern China.

Having experienced the year-long Long March and being on the brink of total annihilation, the CCP — called “bandits” by Chiang — was finally able to take a breather and make advances after the Japanese invasion chased Chiang's army away. They organised and recruited the Chinese people to fight against the Japanese and within a span of eight years, grew their army into a sizeable one million regular troops and two million militia, and with a population size of 100 million in the liberated areas.

The Japanese students whom I taught in the US refuse to admit that China defeated Japan in World War II.

The battle between Kuomintang (KMT), CCP, and the Japanese invaders then was a historical irony that aptly illustrated what Western philosophers had to say about men’s position in history. The counterproductiveness of Chiang’s and Japan’s policies created a historical environment for the realisation of what they least wanted: the success of CCP in China.

Not only did its success change China’s historical development trajectory, but it also changed the development trajectory of world history. Until today, the Japanese, Americans, and some Taiwanese are still unaware of the significance of CCP’s success in China. The Japanese students whom I taught in the US refuse to admit that China defeated Japan in World War II. I told them: "Yes, you are right, China did not defeat Japan in World War II alone. However, you have to admit that the US defeated Japan, right? Yet, China defeated the US — which had defeated Japan — in the Korean War in 1950. That was the sole effort of the People’s Volunteer Army: they chased the troops of the US and the United Nations Command (that received combat support from 16 countries) back to the Military Demarcation Line from their own border." Then only did the Japanese students realise that as long as China continued to resist, defeating Japan was just a matter of time.

Upon hearing my explanations, some American students were also reluctant to admit that China had defeated the US and the United Nations Command during the Korean War. They felt that China then was incapable of defeating the military presence of the US and the United Nations Command. I told them that war was not a match of military power. The military actions of both parties at war were undertaken to achieve their respective political goals. China fulfilled its political goal at the Korean War: to safeguard the territorial integrity of North Korea and eliminate US threats to China’s security. On the other hand, it is clear that the US was unable to fulfil its strategic goal of destroying North Korea and threatening China.

To contain China, the US will definitely show great support for Taiwan independence, but they will not gamble with their country’s fate nor sacrifice their key interests for the sake of a mere pawn and the pawn’s independence.

Lessons from the Korean war for Taiwan and the US

Today, the Taiwan authorities and some Americans have forgotten what happened 70 years ago. The Americans still believe that they can use force to hinder China’s national reunification. While some Taiwan politicians know that they are unable to resist the mainland’s armed reunification, they fantasise that the US would help them gain independence. Taiwan is but a pawn in China-US competition. To contain China, the US will definitely show great support for Taiwan independence, but they will not gamble with their country’s fate nor sacrifice their key interests for the sake of a mere pawn and the pawn’s independence. In 1972, Nixon and Kissinger sacrificed and abandoned Chiang Kai-shek because they wanted to seek China’s help in resolving the Vietnam War. A look into history would show that the US did similar things multiple times. The Philippine’s Marcos, Vietnam’s Ngo Dinh Diem, Iran’s Pahlavi (Mohammad Reza Shah), and Libya’s Gaddafi were once America’s allies. But they were all abandoned in the end.

Some Chinese government officials have even described China-US relations as one of a married couple — quarrelling is fine, but divorcing is disallowed.

The Chinese government does not have the political will to challenge the US. Chinese elites have all sent their children to study in the US, kept their money in American banks, bought US property and land, and sent their family to live in the US. The top travel destination of middle-class Chinese is the US, and they also buy US property and land. The Chinese are also the biggest spenders among tourists visiting the US. Some Chinese government officials have even described China-US relations as one of a married couple — quarrelling is fine, but divorcing is disallowed.

To the mainland, Taiwan independence is not an option — they have been maintaining this stance for over 70 years. Once peaceful reunification becomes impossible, reunification by force would be the only option left. Any Chinese leader who sits and watches Taiwan gain independence would be called a “traitor” by the Chinese — a weight too heavy for any Chinese leader to bear.

It is the original intention of the US government to hinder China’s reunification, the Taiwan politician’s original intention to gain independence, and the mainland leader’s original intention to maintain the status quo. But history is not dictated by human will. The historical irony that happened between the KMT, CCP, and Japan during the 1930s of the past century could repeat itself today. The separate measures undertaken by the US government, the Chinese government, and Taiwan’s KMT are currently tangled up in a big mess and leading history down a path they do not wish to see happen: Taiwan would once again be abandoned amid China-US competition.

Under immense pressure from Chinese public opinion and aggressive pressure from the US, the Chinese government would ultimately resort to force to fulfil its grand mission of national reunification. In the end, Taiwan independence would simply turn to dust and ashes.

Related: Taiwan's Tsai surprised the world with her achievements, but can her good fortune last another term? | Chinese academic: Tsai's true intention was to redraw boundaries in cross-strait relations | With American aircraft carriers paralysed, China's Liaoning leads drills around Taiwan | Chinese military starts 79-day exercises amid pandemic to deter Taiwan and warn the US