Will China take Taiwan by force within six years? Taiwanese think not and experts are worried

At a recent US senate hearing, Admiral Philip Davidson, commander of the US Indo-Pacific Command, assessed US capabilities in the Indo-Pacific, adding that Beijing may invade Taiwan in the next six years. Zaobao correspondent Woon Wei Jong speaks to Taiwan academics about the issue. 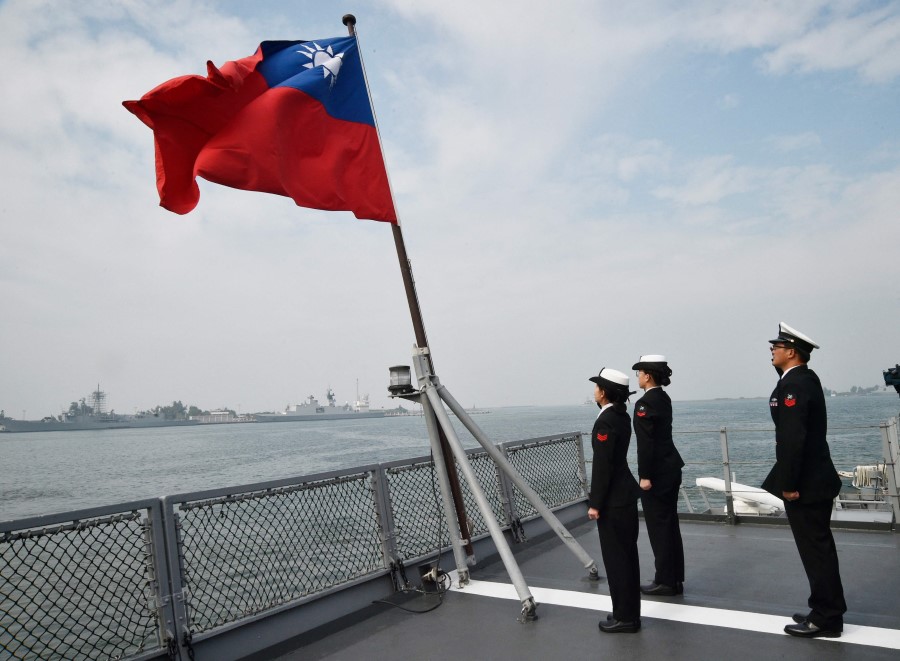 In this file photo taken on 31 January 2018, Taiwanese sailors salute the island's flag on the deck of the Panshih supply ship after taking part in annual drills, at the Tsoying naval base in Kaohsiung. (Mandy Cheng/AFP)

Candice Chan - 30 November 2022
Photo collector Hsu Chung-mao tells us how he first met current Chinese Communist Party (CCP) Politburo Standing Committee member Wang Huning over 30 years ago at an international university debate competition in Singapore, when Wang was a university professor in charge of a debate team. Wang subsequently became a prominent strategist for Hu Jintao and Jiang Zemin, as well as current President Xi Jinping. This article gives a glimpse into Wang’s approach to debating and politics.
Read more
Translated by Candice Chan on 11 March 2021

Admiral Philip Davidson, commander of the United States Indo-Pacific Command, recently told the Senate Armed Service Committee that Beijing is ramping up efforts to overtake US military strength in Asia, and may invade Taiwan in the next six years.

A Taiwan academic told Lianhe Zaobao that 2027 marks the 100th anniversary of the establishment of China’s People’s Liberation Army (PLA), and may be the final year of Chinese President Xi Jinping’s “third term”, which is perhaps why the US Army has concluded that mainland China intends to implement a reunification by force vis-à-vis Taiwan.

At a hearing two days ago, Davidson said: “The greatest danger the United States and our allies face in the [Indo-Pacific] region is the erosion of conventional deterrence vis-à-vis the People's Republic of China.” He expressed concern that without a convincing US deterrent force, China would accelerate its ambitions to supplant the US and its leadership role in the rules-based international order by 2050, or even move that target closer.

Davidson added, “Taiwan is clearly one of their ambitions before that. And I think the threat is manifest during this decade, in fact, in the next six years.”

He also pointed out that Beijing has pursued a campaign of diplomatic isolation, economic pressure, and military threats towards Taiwan, and so the US should continue to provide defence supplies and joint training to Taiwan and help it to defend itself.

In addition to missile defence systems, Davidson proposed building up “a wider base of long-range precision fires” in the Indo-Pacific to be used by sea, land, and air forces. He also called for increasing the budget for the Pacific Deterrence Initiative to US$4.6 billion (S$6.2 billion) in the fiscal year 2022, “to let China know that the costs of what they seek to do are too high.”

On the latest comment about mainland China possibly attacking Taiwan within six years, Associate Professor Alexander Huang of the Graduate Institute of International Affairs and Strategic Studies at Taiwan’s Tamkang University explained: “This was Davidson replying to senators’ questions about the timeline for a potential conflict over Taiwan, and not something he intended to emphasise. But as the current head of the US military in the Indo-Pacific, this assessment definitely has to do with the intelligence he has on hand, including the development of the PLA, movements in the South China Sea, and political changes in mainland China.”

“... Are foreign countries misjudging the situation, or is Taiwan being too naive?” - Associate Professor Alexander Huang, Tamkang University

Taiwan must not be naive in its threat perceptions

He pointed out that the six-year timeline for attacking Taiwan coincides with the 100th anniversary of the PLA, and may also mark the last year of Xi’s third term in office (2022 to 2027). Xi could be continuing on a fourth term or handing the baton to someone else in the year 2027. The US military may be predicting that the mainland is aiming for a reunification by force vis-à-vis Taiwan before it reaches this milestone.

He said, “Even as voices outside China speaking of a military confrontation in the Taiwan Strait in the near future are getting louder, mainstream public opinion in Taiwan remains of the view that the mainland will not attack Taiwan. This devil-may-care mentality is what worries me the most. Are foreign countries misjudging the situation, or is Taiwan being too naive?”

Lin Hsien-Sen, director of the Department of East Asian Studies at National Taiwan Normal University, gauged that the estimated timeframe for a possible mainland invasion of Taiwan was likely given by the US military generals to heighten the sense of crisis. This was done with a view to increasing military budgets and providing ammunition for continuing arms sales to Taiwan.

He reasoned, “If the US helps to strengthen Taiwan’s defence capabilities, the prospect of the US military having to intervene to protect Taiwan and possibly incurring US military casualties will be minimised. When China-US relations are tense, Taiwan is the US’s stepping stone in strengthening its maritime power. But if China and the US reconcile, a Taiwan that emphasises autonomy would become a stumbling block to China-US relations.”

Lin further pointed out that Taiwan is located in a key strategic location in the South China Sea and that the US has always treated the South China Sea as its “backyard” following the Second World War. But when faced with a mainland China that considers the South China Sea its “core interest” both on the military and economic fronts, it becomes a huge challenge for the US to gain maritime hegemony.

“... But once military powers of both sides are on par with each other, the mainland would be even more determined to safeguard the South China Sea by force. At that time, will the US be willing to wage war for a distant South China Sea?” - Professor Lin Hsien-Sen, National Taiwan Normal University

Arthur Ding, a professor emeritus at National Chengchi University’s Graduate Institute of East Asia Studies and an expert in the mainland’s military affairs, told Zaobao that the mainland’s leaders would not openly talk about a specific timeframe for attacking Taiwan because “it would be too embarrassing if they promised something they can’t deliver”. But he also pointed out that the mainland increased its defence budget by 6.8% this year, which is higher than its estimated GDP growth of 6%. In that context, the growth rate of the PLA’s might in the next few years is certainly worth watching.

Related: Peaceful or armed reunification: Are top Chinese advisers divided over Taiwan? | Will Beijing roll out a 'national reunification law' targeting Taiwan? | Chinese academic: A ‘reunification by force’ would be Taiwan's last | 50 years later, is China ‘preparing for war’ again?