Given rising cross-strait tensions, there have been increasing calls in mainland China for reunification by force with Taiwan. However, recent statements by key Chinese advisers on Taiwan issue seem to suggest otherwise, and Chinese academics have since been engaged in a debate. While both sides appear to be in opposition, Zaobao correspondent Yu Zeyuan thinks it is necessary to look beneath the surface. 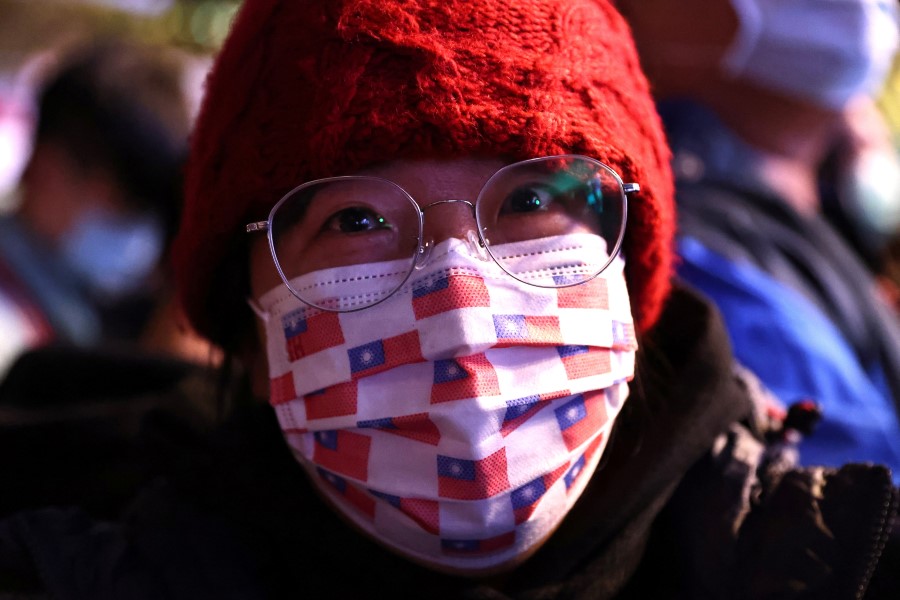 A woman wears a face mask with a Taiwan flag print during a New Year celebration in Taipei, Taiwan, 1 January 2021. (Ann Wang/REUTERS)

Candice Chan - 28 June 2022
US-based young comic artist Bei Yi reflects on China's gaokao (university entrance exams), which took place in early June. Every year, Chinese students cross this narrow log bridge of national exams, hoping to find a clearing on the other side. Students from regions across China, rich and poor, see this as a possible ticket to a better life and maybe even a passport to the West. When the stakes are so high, studying becomes a moral obligation to one's family. Some make it out, but on that journey, many things are left behind.
Read more
Translated by Candice Chan on 4 January 2021

With continued tensions in the Taiwan Strait, there has been recent debate among academics in mainland China over whether China’s policy towards Taiwan will continue to be one of “peaceful reunification” or shift towards “reunification by force”.

On 29 December 2020, at an annual forum on the Taiwan political situation and cross-Strait relations in Beijing, National Society of Taiwan Studies (NSTS) president Wang Yifu said: “No matter how the political situation changes, we [the mainland] still hold the initiative in cross-Strait relations. Mainland China’s general policy towards Taiwan is clear and consistent. We hold firmly to the one-China principle and the 1992 Consensus, to peaceful reunification and One Country, Two Systems, to opposing and containing separatist schemes and actions towards Taiwan independence, and to safeguarding national sovereignty and territorial integrity. We will not tolerate comments that disparage the central government’s policy towards Taiwan and which deny the results of our efforts in Taiwan.”

The NSTS is mainland China’s official think tank on Taiwan issues, and 70-year-old Wang who took over as president on 7 December 2020, succeeding former State Council member Dai Bingguo, is one of China’s key advisors on the mainland's policy towards Taiwan. From 1998 to 2008, Wang was deputy governor of Fujian under then governor Xi Jinping — his comments are an indicator of mainland China’s policy towards Taiwan.

Wang and Liu’s reiteration of peaceful reunification and One Country, Two Systems — especially Wang’s emphatic comment that “we will not tolerate comments that disparage the central government’s policy towards Taiwan” — is seen by Taiwan as an effort by mainland authorities to lower the heat on talk of a reunification by force.

At the same time, in a New Year’s message carried in the first issue of the Relations Across the Taiwan Strait  (《两岸关系》) magazine in 2021, Liu Jieyi, head of the Taiwan Affairs Office (TAO) of the State Council, wrote: “We hope our compatriots in Taiwan can see the historical direction and the general trend of the times, stand up against separatist ‘Taiwan independence’ and not be ‘pawns’ manipulated by external forces, work with us to maintain the stability of the Taiwan Strait, and seek, protect, and enjoy peace together… promote the peaceful and integrated development of cross-strait relations,  and push for reunification of the motherland. We firmly believe that as long as compatriots on both sides of the Taiwan Strait are of one mind and act as one, there will be greater room for peaceful development of cross-Strait relations.”

Tough talk to fend off hawks

With recent calls for reunification by force among mainland China’s online community, Wang and Liu’s reiteration of peaceful reunification and One Country, Two Systems — especially Wang’s emphatic comment that “we will not tolerate comments that disparage the central government’s policy towards Taiwan” — is seen by Taiwan as an effort by mainland authorities to lower the heat on talk of a reunification by force.

So, Wang’s comments are calculated to align mainland China’s policies and attitude towards Taiwan, to prevent hawkish comments disparaging the central government’s policies from interfering with the latter’s efforts on Taiwan, and becoming fodder for attacks by the opposition.

Some mainland China academics feel that Wang’s comments mean that China might impose strict regulations on discussions on Taiwan. Chinese Academy of Social Sciences researcher Zhang Ning wrote on microblogging platform Weitoutiao that Wang’s line about not tolerating comments that disparage the central government’s policy towards Taiwan and which deny the results of efforts in Taiwan suggest that comments on Taiwan might be tightened and more strictly controlled — no Chinese individual would want to be labelled as “disparaging the central government”.

Tighter restrictions on discussions on Taiwan?

However, mainland China academics have also questioned Wang’s criticism of disparaging the central government. Professor Yan Xuetong, dean of the Institute of International Relations at Tsinghua University, raised two questions on Weitoutiao: What is the difference between “disparaging” and “discussing” as meant by Wang? Would the NSTS session be considered discussion or disparagement?

Some netizens responded bluntly under Yan’s post that Wang considers Taiwan-related efforts his prerogative, but the question is, who gave him authority over Taiwan? What results has mainland China achieved in Taiwan? Some netizens joked that the only thing China has achieved is to nurture a whole group of people who want “Taiwan independence”.

Since this year, China has clearly increased its military pressure on Taiwan, not just in retaliation for the US’s recent frequent playing of the “Taiwan card”, but also to prevent black swan incidents relating to Taiwan independence.

On the other hand, reunification by force is also a reality that mainland China needs to face. Since this year, China has clearly increased its military pressure on Taiwan, not just in retaliation for the US’s recent frequent playing of the “Taiwan card”, but also to prevent black swan incidents relating to Taiwan independence. To deter the outgoing Trump administration from taking risks on the Taiwan issue, China’s preparations for reunification by force are not just for show.

And so, the Chinese authorities will not abandon reunification by force even as it emphasises peaceful reunification; neither will it allow reunification by force to become the mainstream narrative in its efforts towards Taiwan. After all, reunification is not listed among China’s targets over the next five years, and its top priority remains to push its own modernisation. All mainland China needs to do is maintain its current growth, and its ability to control cross-strait relations will also strengthen.

Related: The median line of the Taiwan Strait: No longer a boundary for mainland China | The only way out for the Taiwan issue | Chinese academic: A ‘reunification by force’ would be Taiwan's last | Will Beijing roll out a 'national reunification law' targeting Taiwan?