In China’s just-released "14th Five-Year Plan (2021-2025) for National Economic and Social Development and the Long-Range Objectives Through the Year 2035", the centennial goal of modernising the PLA by the latter’s 100th anniversary in 2027 was set out. In the face of headwinds caused by turbulent US-China relations, does this spell China’s hardened mindset of getting prepared for war? What impact will such defensive thinking have on China and the world in the next 15 years? 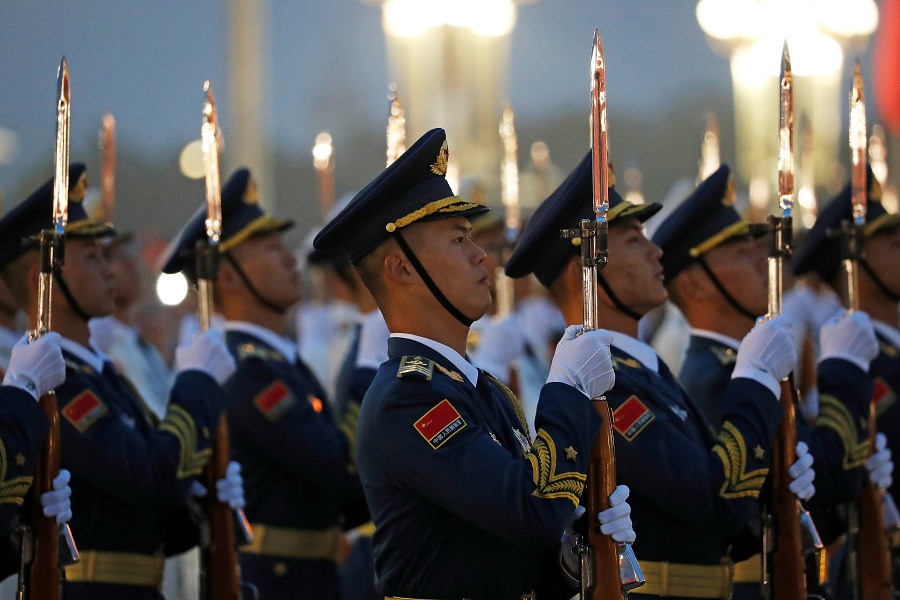 Members of the PLA Honour Guard attend a flag-raising ceremony at Tiananmen Square on National Day to mark the 71st anniversary of the founding of People's Republic of China, in Beijing, China, 1 October 2020. (Carlos Garcia Rawlins/Reuters)

Grace Chong - 25 January 2023
With rumblings of US House Speaker Kevin McCarthy possibly visiting Taiwan in spring, Yang Danxu observes that this will not be the last we see of the “Taiwan card” being played by US politicians as they move into the second half of the current US presidency.
Read more
Translated by Grace Chong on 5 November 2020

The world is holding its breath until the final results of the 2020 US presidential elections are in. Will the world welcome “four more years of Trump” or enter a “post-Trump era”? Meanwhile, China, which is in strategic competition with the US on all fronts, has just released the communique of the fifth plenary session of the 19th Central Committee of the Chinese Communist Party (CCP). This document contains strong hints that China is getting itself prepared for war.

The communique revealed that a “centennial goal” in the military sphere is included in the “14th Five-Year Plan (2021-25)” and “Long-Range Objectives Through the Year 2035”. According to the communique, “China will accelerate the modernisation of national defence and the military”. It added that China will also comprehensively strengthen military training and preparation for war, and improve the strategic capabilities to safeguard national sovereignty, security and development interests, and ensure that these goals can be achieved in 2027, when the People’s Liberation Army (PLA) celebrates its 100th anniversary.

The fifth plenary session of the 19th Central Committee of the CCP ended on 29 October with the passing of proposals for formulating the 14th Five-Year Plan (2021-2025) for National Economic and Social Development and the Long-Range Objectives Through the Year 2035 (《关于制定国民经济和社会发展第十四个五年规划和2035年远景目标的建议》, henceforth “Proposals”) on the same day. State media published the booklet on 3 November, in which the centennial goal coinciding with the PLA’s 100th anniversary and the need to comprehensively strengthen military training and preparation for war were mentioned again.

... this is the second time the CCP included “getting prepared for war” in its Five-Year Plan in 50 years...

The Proposals states that China will build up its strategic capability, including its combat power, in new domains and using new tactics. It will accelerate the development of strategic, state-of-the-art technologies, and expedite the upgrading of weapons, as well as support the development of AI weapons. All mentioned for the first time, these points detail how the PLA will be upgrading itself over the next seven years.

Some media noted that this is the second time the CCP included “getting prepared for war” in its Five-Year Plan in 50 years, highlighting Beijing’s assessment of the severity of the external situation at present.

The last time China did so was during the 1960s, in the third Five-Year Plan (1966-70) that took three years to formulate. Back in the 1960s, China-Soviet relations were hostile, China-India relations were continuing to worsen, and Taiwan was planning a counterattack on the mainland. During a speech made in 1965 regarding the third Five-Year Plan, PRC founding leader Mao Zedong urged the people to prepare for war and to be ready for famine.

Today, the two major powers of China and the US are at risk of decoupling and are facing a worsening tech war. China and India have been at daggers drawn and tensions between them are at a new high in 60 years, with troops deployed on the border for over half a year and about to enter the harsh winter. The US has been playing the “Taiwan card” frequently and expanding its arms sales to Taiwan, and mainland military aircrafts and warships are frequently flexing their muscles in the Taiwan Strait as well.

This is similar to the external risks that mainland China faced 50 years ago, which makes the resurfacing of “getting prepared for war” unsurprising. The crises above are directly or indirectly related to the US — along with Xinjiang, Tibet, Hong Kong, the South China Sea — the US has started a series of associated tussles with China on each of these issues.

While no one would interpret “getting prepared for war” as mobilising the entire country, the signals from China are more of using military power to protect its sovereignty, security, and interests. The increase in China’s defence budget went down 0.9 percentage points over last year to 6.6% this year, the lowest increase in 32 years. However, Reuters forecast that with Beijing’s increasing tough stance on Taiwan and the South China Sea, military expenditure will rebound.

Right now, mainstream sentiment in China is that Beijing has to let go of its fantasies about China-US relations and US leaders, and prepare for the worst.

What can be foreseen is that no matter who is in the White House over the next four years, China-US relations will not go back to the previous cooperative relationship, and the US will not let up on its pressure. If Biden is elected, it may bring back traditional allies who did not get along with Trump, for a more organised and systematic containment of China. The US will also continue to dent China’s international image, and reduce reliance on China in the crucial manufacturing sector and continue its partial decoupling, while tightening supply restrictions in the high-tech sector or even completely cutting off access to key technologies.

Right now, mainstream sentiment in China is that Beijing has to let go of its fantasies about China-US relations and US leaders, and prepare for the worst. This week, Qiushi journal published an internal speech by Chinese President Xi Jinping, showing that in April this year, he called for the creation of “killer” technology, which can act as a strong deterrence and means of retaliation in the event that external parties cut off China’s supply chain. This shows that China’s leaders have long been aware that extreme US pressure will be a long-term measure, and have been preparing for it rather than waiting for a change in the US government and hoping for an improvement in China-US relations.

...the next 15 years may be the most tumultuous for the world since WWII, and it is hard to predict how the China-US competition will end.

The communique and the Proposals of the Fifth Plenary Session also placed unprecedented focus on innovation and technology, putting innovation at the core of China’s modernisation, and self-reliance in technology as a strategic pillar of national development. Coupled with “getting prepared for war”, and stepping up on the “dual circulation” system focused on the domestic market, these three measures all show that China is focusing on building up its “internal strength”. If the US cuts supplies, chokes off channels, or exerts extreme containment pressure, or if there is decoupling or conflict with the US, then China will have more strategy options and space for manoeuvring to minimise external impact.

With China “getting prepared for war” in the mid- to long-term after the US election, and the continued weakening of mutually beneficial China-US relations, the next 15 years may be the most tumultuous for the world since WWII, and it is hard to predict how the China-US competition will end.

Related: Why Taiwanese are pro-Japan but anti-China | US, China and Taiwan: A complicated triangular relationship since the 1950s [Photo story] | An innovative China has overtaken the US in patent numbers? | China and the US, who innovates better? | What happened to Baidu, once China's golden boy of innovation?