16 Sep 2020
By Sahashi Ryo
Associate Professor of International Relations, Institute for Advanced Studies on Asia, The University of Tokyo

Former Chief Cabinet Secretary Yoshihide Suga has been confirmed as Japan’s incoming prime minister, following a vote in parliament today. What would his foreign policy priorities be as prime minister? 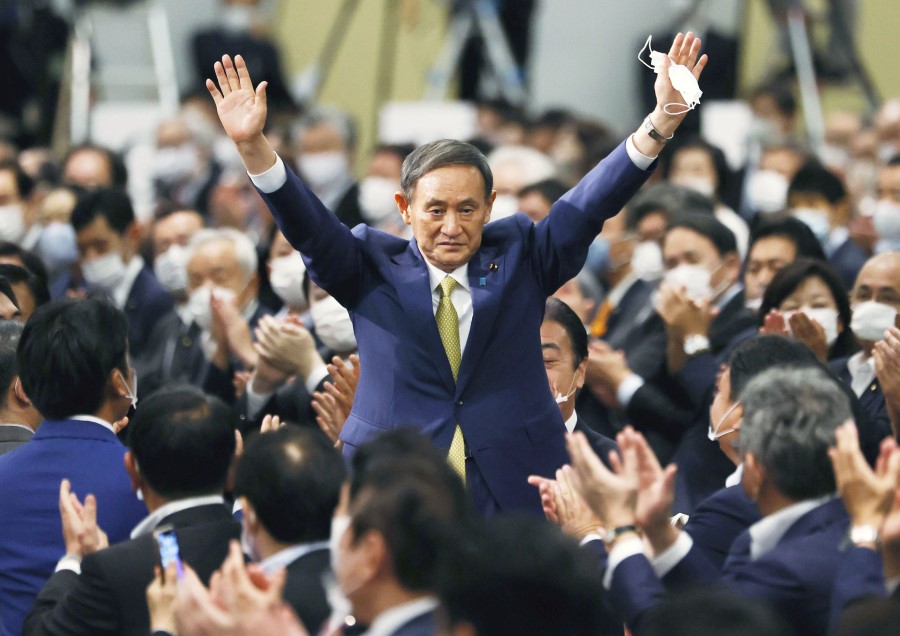 Yoshihide Suga gestures as he is elected as new head of the ruling party at the Liberal Democratic Party's (LDP) leadership election paving the way for him to replace Shinzo Abe, in Tokyo, 14 September 2020. (Kyodo via REUTERS)

Candice Chan - 28 November 2022
Often referred to as the world’s economic “canary in the coal mine”, South Korea has seen its economy tumble over the past year, impacted by external factors such as US interest rate hikes and signs of recession in key trade partners. The accumulation of domestic factors — currency crisis, tumbling stock market and rising inflation — is also hitting the South Korean economy hard. However, this industrial powerhouse has the domestic means to climb out of the doldrums.
Read more
Translated by Candice Chan on 16 September 2020

Yoshihide Suga was elected Japan's prime minister by a vote in the parliament's lower house today. He becomes the country's first new leader in nearly eight years, after Shinzo Abe's sudden resignation due to health reasons. Suga was elected president and leader of Japan's governing Liberal Democratic Party (LDP) on 14 September, which paved the way for the former chief cabinet secretary to become the next prime minister.

The world that awaits Suga is one whose international order has dissolved to a previously unimaginable degree. The confrontation between the US and China as well as the emergence of populism is bringing about a setback from globalism. The spread of the Covid-19 outbreak has shrunk the world economy and growing national debt are proving a serious challenge. To begin with, Suga's new start really is coupled with major responsibility as there is still a long way to go to contain the pandemic of Covid-19 and there is a need to restore Japan's national economy as well as bring back the cooperative practices that have completely gone out of fashion in the international community.

It is not only Japan. Leaders in all countries lack enough experience to face these difficulties. However, the type of leadership needed to carve out a future in an age of crisis is not an idealistic but rather pragmatic one.

Nobody doubts Suga’s skill when it comes to domestic affairs, but even before his appointment there was a lot of criticism saying that it is the foreign policy we should worry about.

Seen from this perspective, Suga has a great deal of potential. The chief cabinet secretary (CCS) is a cornerstone of the Japanese government, that is, a person who has access to all information and acts like a control tower, managing everything from policy coordination to crisis management. There is no other Japanese politician who has served as CCS for almost eight years. Suga has thorough knowledge about how to manage bureaucrats and has also built a deep relationship with ruling coalition partner Komei Party. Unlike his predecessor, he does not have strong backing from a particular party faction or conservatism, so it is expected that a snap election will be held soon to increase his legitimacy with the help of public opinion.

As regards to domestic policy, Suga has pledged to implement administrative reorganisation, deal with digital transformation, and improve productivity by reorganising small and medium enterprises. Nobody doubts Suga’s skill when it comes to domestic affairs, but even before his appointment there was a lot of criticism saying that it is the foreign policy we should worry about.

In that respect, however, Suga has carved out a position for himself built on careful consideration by working in tandem with the bureaucrats that advise him. He has a deep understanding of the main points of Japanese foreign policy, meaning the need to maintain and ensure the Japan-US security alliance, to take a leadership role in making global rules while recruiting more partners from outside the alliances, and to stabilise the surrounding environment while engaging with China at the same time.

Of course, former Prime Minister Abe might have a slight upper hand as the golf lover who built a personal relationship with US President Donald Trump. And unlike the case of Abe who has eloquently given many addresses to international audiences, we as analysts will likely have a hard time trying to grasp the characteristics of Suga diplomacy.

...he will seek to maintain the international order as it has been by strengthening relations with the UK, France, and Germany to pull extra-regional countries into the FOIP.

Even so, the exceptional visit to the US that Suga did as CCS last year does indicate a strong intention to prioritise the Japan-US relationship. Suga is also not likely to make the “history problem” a point of contention with neighbours, and although Japan’s positioning (in the Japan-US-China relationship) is difficult as the US-China conflict is currently intensifying, he will probably try to adroitly maintain the Japan-China relationship. At the same time, it has been said that he is harsh on South Korea, so pessimism might prevail when it comes to mending the Japan-South Korean relationship since there are few signs that things will change in South Korea either.

There is also no doubt that the vision of a Free and Open Indo-Pacific (FOIP) will be maintained for the time being. There exists a strong consensus in the government on strengthening relations with Australia, India, and ASEAN nations, so he will not make a U-turn on this. Rather, he will seek to maintain the international order as it has been by strengthening relations with the UK, France, and Germany to pull extra-regional countries into the FOIP.

He will quietly put more restrictions in place to prevent the outward flow of technology and incoming investments as a way to guard better against China.

The Japan-UK Comprehensive Economic Partnership Agreement was recently agreed upon in large part and will likely be ratified in the near future. Efforts will probably also be made to expand the cooperation with the Five Eyes alliance. In any case, rather than pinning his hopes on foreign policy negotiations with countries that have a low chance of success, he will definitely try to solidify the existing foundation by prioritising relations with the US and other countries with aims in common. He will likely also not hold back his support for the global health initiatives aimed at tackling Covid-19.

In the area of security policy, Suga will probably be careful about furthering the debate on Japan’s strike capacity at this point in time. He will quietly put more restrictions in place to prevent the outward flow of technology and incoming investments as a way to guard better against China.

Of course, the challenge is how to achieve common ground with the other countries involved in a situation where the US adopts an overly hard line on China. It is also uncertain whether the post-coronavirus world will globalise again. Japan faces the same problems as other Asian countries and Europe. Yet, precisely because we are finding ourselves in these turbulent times, it is not a bad thing to have a pragmatic leader who has abundant experience.