Japan is considering the deployment of non-nuclear counter-strike capabilities in the face of growing threats from North Korea and China. Japanese academic Yoichiro Sato believes that for Southeast Asian countries, this might be a win-win situation in terms of maintaining the region’s non-nuclear stance, yet retaining the option of bringing US-Japanese allied capabilities to bear in contingencies. 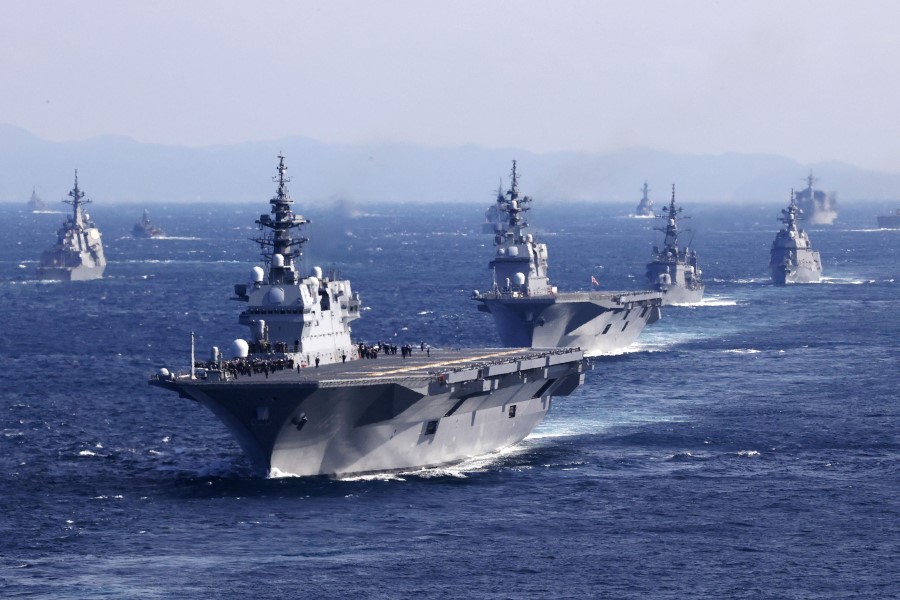 Candice Chan - 30 January 2023
A mall in Shenzhen came under fire for putting up white lanterns with black text as part of its Chinese New Year decorations, while an “ugly” rabbit-shaped light decoration was removed from another mall in Chongqing. Academic Zhang Tiankan muses on tradition and innovation, and the evolution of traditional decorations.
Read more
Translated by Candice Chan on 1 December 2022

The missile competition in Northeast Asia is gathering pace as the region’s security situation continues to worsen. A series of North Korean ballistic missile tests ― the latest one in October triggering evacuation alerts in Japan’s northeastern regions ― poses an increasingly imminent danger to Japan’s security. Russia’s invasion of Ukraine has reignited Moscow’s tensions with Tokyo and exacerbated Japan’s already-ominous outlook of its immediate security environment.

China’s annual military parade displays DF-17 hypersonic glide vehicles. The rationale behind this: to make US allies doubt the credibility of America’s naval capability to maintain its presence in the Indo-Pacific.

The deployment of such counter-strike capabilities within the US-Japan military alliance has implications for East Asia and Southeast Asia, given Washington’s desire to deploy intermediate missiles in the region and Japan’s plan to deploy non-nuclear missiles onboard Navy platforms.

In 2019, the US withdrew from the Intermediate Nuclear Forces (INF) Treaty, paving the way for more robust US efforts in countering missile challenges from its adversaries, especially from China. The INF Treaty was signed between the US and the Soviet Union in 1987 to ban the development and deployment of ground-based intermediate-range (500-5,500 kilometres) ballistic and cruise missiles.

Not bound by the INF, Beijing has had a free hand in deploying a growing number of intermediate-range ballistic missiles which have US bases and allies in East Asia within their range. China’s annual military parade displays DF-17 hypersonic glide vehicles. The rationale behind this: to make US allies doubt the credibility of America’s naval capability to maintain its presence in the Indo-Pacific.

China also has a track record of test-firing short-range and intermediate-range missiles over Taiwan, in 1996 and most recently after US House Speaker Nancy Pelosi’s visit to Taipei. Its military drills around Taiwan in August included the test-firing of a ballistic missile into Japan’s exclusive economic zone in the East China Sea for the first time.

Some people in the US and Tokyo have even raised the possibility of basing ground-based US missiles on Japanese territory, but they remain in the minority.

As China has significantly strengthened its anti-access, area denial (A2AD) capabilities, of which ground-based anti-ship cruise and ballistic missiles are key components, Washington has been exploring ways to improve the survivability of its surface ships in regional waters. No longer constrained by the INF, the US may seek deployment of ground-based intermediate-range missiles, which most likely can be tipped with a nuclear or a conventional warhead. Some people in the US and Tokyo have even raised the possibility of basing ground-based US missiles on Japanese territory, but they remain in the minority.

Prior to 2020, Japan’s missile defence debate had tried to keep preemptive- or counter-strike capabilities at bay. In 2020, the Japanese government even cancelled the procurement of the ground-based Aegis Ashore system which can intercept ballistic missiles. However, repeated North Korean missile testing has gradually eased the strong Japanese pacifism which prevents the country from acquiring offensive weapons. Missile defence discussions in Japan today have touched upon possible possession of counter-strike capabilities, with multiple options including development of new sea-based, air-launched and ground-based missiles with ranges over 1,000 kilometres.

Japan’s move towards acquisition of strike capabilities is significant in three ways.

First, it supplements the similar capabilities of the US, which are largely ship-based. Balancing against Chinese missile threats has thus become a burden-sharing issue between the two allies.

... The US can technically develop new intermediate-range missiles and deploy them on its naval vessels and strategic bombers, which in an emergency could operate from the bases in Japan.

Second, Japan’s acquisition of such capabilities will further push the envelope of collective defence by raising questions first about shooting down Guam-bound intermediate-range missiles and then about US-mainland and Hawaii-bound long-range ballistic missiles. The Japanese government has already pushed the boundaries of its interpretation of Japan's constitution on collective defence through the adoption of Japan’s Legislation for Peace and Security in 2015. However, the legislation stops short of giving a clear “go” to the second scenario.

Third, intermediate-range Japanese missiles would alleviate the imperative for the US to deploy its intermediate missiles in East Asia. Japan’s three non-nuclear principles prohibit the production, deployment and introduction (by another country) of nuclear weapons on Japanese territories. The potential contradiction between the Japanese principles and the US policy of not disclosing the whereabouts of its nuclear weapons abroad has been reconciled by a now well-known record of discussion of 1960 between the two countries.

This tacitly permits “transit” of US nuclear weapons through the Japanese territories without prior consultations. The US can technically develop new intermediate-range missiles and deploy them on its naval vessels and strategic bombers, which in an emergency could operate from the bases in Japan. However, reversing the post-Cold War removal of nuclear weapons from US surface ships would elevate the controversy surrounding the bilateral arrangement and invite even harsher Chinese reactions.

No Southeast Asian country is willing to host ground-based US missile forces either due to domestic political sensitivities and fear of China’s reprisals.

Some Southeast Asian littoral states would be facing a similar dilemma as they attempt to balance China’s growing assertiveness through aiding the presence of US naval ships in the region through regularised visits. No Southeast Asian country is willing to host ground-based US missile forces either due to domestic political sensitivities and fear of China’s reprisals. It would also be a breach of the Southeast Asian Nuclear Weapon-Free Zone Treaty (SEANWFZ) which forbids the introduction of nuclear weapons into ASEAN member states and their maritime zones.

Japan’s acquisition of its own non-nuclear missile capabilities offers a middle road that allows the region to avoid the “nuclear” question.

Given all these sensitivities, especially the ambiguity regarding the presence of US nuclear weapons aboard its ships, Japan’s acquisition of its own non-nuclear missile capabilities offers a middle road that allows the region to avoid the “nuclear” question. For Southeast Asian countries, this is tantamount to having one’s cake and eating it: maintaining the region’s non-nuclear stance, yet retaining the option of bringing US-Japanese allied capabilities to bear in contingencies.

The Japanese capabilities would enhance US and allied preparedness against the missile challenges from China and North Korea while forestalling a full-scale US missile deployment to the region. Granted, this would give fodder for China’s old playbook of invoking Japan’s past militarism to scare Southeast Asian countries. But in this increasingly volatile region, as the strategic détente among the great powers in the post-Cold War era is "definitely over", Japan cannot be a credible security actor without sufficient defence and deterrence capabilities.

This article was first published by ISEAS - Yusof Ishak Institute as a Fulcrum commentary.

Related: Will China abandon its 'no first use' nuclear policy? | Revival of nuclear competition: How should China respond? | The world is no longer safe from a nuclear war | 5 nuclear-weapon states vow no arms race: A more peaceful world?