The proposal to build a physical bridge between Taiwan's Kinmen and mainland China's Xiamen has aroused political debates in Taiwan. While the project could boost local economies and people’s livelihoods, some are concerned that constructing a cross-strait bridge is a pro-China move that would compromise Taiwan’s security imperatives and efforts to build a “Taiwan identity”. Taiwan academic Liu Chin-tsai looks at the implications and debate surrounding the proposed infrastructure. 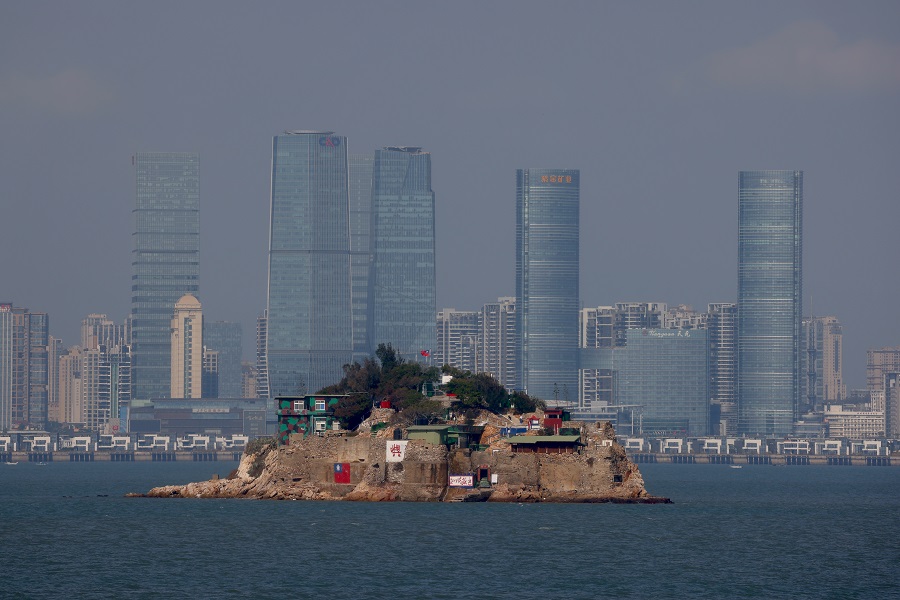 A Taiwan flag is seen painted on Shihyu Islet in front of Xiamen, a coastal city in China, in Lieyu Township, Kinmen, Taiwan, 19 October 2021. (Ann Wang/Reuters)

Grace Chong - 23 November 2022
US academic Wu Guo looks at the recent online furore over the mushrooming of state-run communal canteens in China and offers his views from the US. While providing food for the needy should be part of the state's responsibility, there should also be space for civil society, private enterprises and the public to play a role to create kind and healthy communities.
Read more
Translated by Grace Chong on 18 July 2022

In fact, the Kinmen-Xiamen bridge has long been mooted by the local government of Kinmen. In 2008 when Ma Ying-jeou was elected Taiwan president, he requested then Executive Yuan president Liu Chao-shiuan to build the Kinmen-Xiamen bridge as part of the medium- to long-term plans for Kinmen’s economic development. Then chair of Kinmen Kaoliang Liquor Inc. and former legislator Joanna Lei was invited by then Kinmen magistrate Lee Chu-feng to participate in the project.

Kinmen is an important hub for cross-strait interaction. As Kinmen and Xiamen’s frequent and close interaction has promoted numerous trade and commercial activities, building the Kinmen-Xiamen bridge would be a boon for Kinmen’s development.

The Taiwan government has also fallen short of meeting the needs of Kinmen’s economic development and the people’s livelihood; as a result, most of the younger generation and the general public support constructing the bridge.

... discussion about the Kinmen-Xiamen bridge has also extended to that of a bridge connecting Fuzhou and Matsu, creating a “diffusion effect”.

While a bridge can promote cross-strait peace, the ideological divide between both sides remains a huge obstacle, potentially sparking heated debates about security issues. Indeed, the younger generation believes that the difficulties of constructing the bridge do not lie in the lack of public support, technological expertise or management experience, but in cross-strait hostility and Taiwan’s security concerns.

Next, discussion about the Kinmen-Xiamen bridge has also extended to that of a bridge connecting Fuzhou and Matsu, creating a “diffusion effect”.

Following Ko’s proposal, Chang Yung-chiang, speaker of the Lienchiang County Council, suggested exploring building a bridge between Fuzhou and Matsu, which are just 20 km apart. He said that a connection to the Fujian province would surely benefit Matsu’s future development, and other than political considerations, the local economy’s prosperity must be taken into account when deciding on the building of bridges.

The county council emphasised that Matsu residents want a bridge to connect them to Fujian due to their close proximity and for cross-strait peace. The bridge would promote economic development, boost tourism and improve people’s lives, as well as alleviate cross-strait tensions and enhance the positive development of cross-strait relations, thus reducing the interference of politics.

For example, cross-strait tensions have led to the suspension of the export of grouper fish from Taiwan to the mainland. For the residents of the offshore islands, people’s livelihoods and economic issues should take precedence over the independence/reunification debate.

While the construction of the Kinmen-Xiamen bridge would meet the livelihood and economic needs of Kinmen residents, the Democratic Progressive Party (DPP) cited political-security reasons for rejecting the proposal, igniting a clash between the offshore islanders and the DPP on the way forward on cross-strait relations and infrastructure.

This could heighten the sense of dissatisfaction that offshore islanders have towards the pan-Green government, in turn making offshore politics increasingly “deep Blue”. Hence, amid these conflicts, the longer the pan-Green camp stays in power, the worse the political alienation, economic decoupling and cultural opposition between the main island and offshore islands, and the greater the forces that would drive them apart.

In addition, the act of strengthening the identities of Kinmen and Matsu is at odds with developing a “Taiwan identity” in broader Taiwan society.

With the rise of the pan-Green camp, support for constructing a “Taiwanese identity” or “Taiwan identity” and the call for “Taiwan independence” have reached an all-time high. The DPP has bolstered these attitudes through political socialisation and educational reforms in recent years.

... it is difficult for the DPP to construct and shape the “national identity” of Kinmen and Matsu residents as they identify more with China and exhibit a “Chinese identity” or “China identity”.

However, this has in turn had an impact on and estranged the offshore islands from the main island. In the past, Kinmen and Matsu have always played the role of safeguarding the “Republic of China” and acted as bases for the former Nationalist governments to “reclaim mainland China”.

In terms of administrative division, Kinmen and Matsu were traditionally Fujian province’s Kinmen County and Lienchiang County respectively. Hence, it is difficult for the DPP to construct and shape the “national identity” of Kinmen and Matsu residents as they identify more with China and exhibit a “Chinese identity” or “China identity”.

In fact, both sides of the Taiwan Strait should make good use of Kinmen’s intermediary role to create a buffer zone. Due to the Covid-19 pandemic, Kinmen’s overall economy is showing signs of stagnation. Following the suspension of the “mini three links”, the number of tourists has plunged, leading to a decline in the economy. Hence, people are hoping that the mini three links will resume operations.

Kinmen was considered a world-class model in terms of its success in anti-epidemic controls during the early stages of the pandemic. With the maintenance of “zero confirmed cases” in the county, local residents are also satisfied with the governance of the pan-Blue camp.

Situated on the front line of the Taiwan Strait, if Kinmen is able to promote cross-strait integration and build friendly ties between the people on both sides, it could help to facilitate the formation of a framework for peaceful and stable cross-strait relations.

Lastly, the Kinmen people in Taiwan may become a potential political pressure group in the fast-approaching local elections at the end of the year. Holding nearly 500,000 votes in their hands, they are potential supporters of the TPP, and lean towards restoring harmonious cross-strait relations, with some advocating the construction of the Kinmen-Xiamen bridge and resuming operations of the mini three links.

If Taiwan authorities wish to strengthen their relations with the offshore islands and are not supportive of the Kinmen-Xiamen bridge, they would have to allocate more resources to develop the offshore islands, boost its economic growth or consider deepening and improving the existing mini three links mechanism. These measures could address security concerns while meeting the livelihood needs of the Kinmen people.

In 2009, then Taiwan President Ma Ying-jeou asked the now-dissolved Council for Economic Planning and Development to present an evaluation report for the construction of a bridge between Kinmen and China’s Xiamen.

According to a separate feasibility report from 2006, the northern line would take roughly six years to complete and could cost between NT$12.5 billion (US$418 million) and NT$14.7 billion, excluding annual operating and maintenance costs of over NT$62 million.

Related: Over 100 mainland Chinese sand dredgers 'surround' Matsu islands | Who dictates war and peace in the Taiwan Strait? | The Taiwan Strait Crises of the 1950s and the evolution of Sino-US relations [Photo story] | The median line of the Taiwan Strait: No longer a boundary for mainland China | Is the Kuomintang 'pro-US' or 'anti-US'? The strategic significance of Eric Chu’s visit to the US