Sand dredgers from mainland China are congregating in the waters off the Taiwanese-controlled Matsu islands with increasing frequency. What does this mean for cross-strait relations? ZB correspondent Woon Wei Jong finds out. 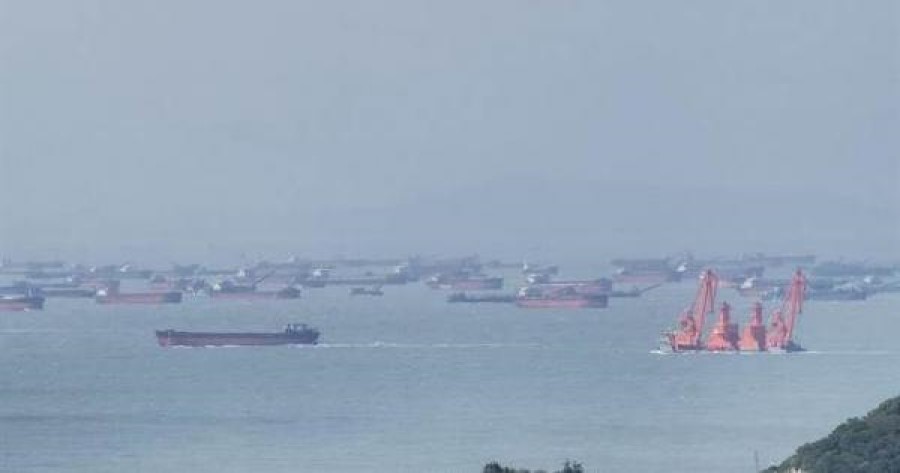 Candice Chan - 30 January 2023
A mall in Shenzhen came under fire for putting up white lanterns with black text as part of its Chinese New Year decorations, while an “ugly” rabbit-shaped light decoration was removed from another mall in Chongqing. Academic Zhang Tiankan muses on tradition and innovation, and the evolution of traditional decorations.
Read more
Translated by Candice Chan on 27 October 2020

Over 100 sand dredgers from mainland China were recently found crossing into the waters off the Taiwanese-controlled Matsu islands to extract sand. The vessels stretched for kilometres on the water, in an apparent move to “surround” the Matsu islands. The Taiwan coast guard deployed patrol ships to disperse the Chinese vessels, but stressed that most mainland Chinese vessels were not within Taiwanese waters.

Academics on cross-strait issues told Lianhe Zaobao that there is a lack of mutual trust between the authorities on either side of the Taiwan Strait, and it is possible that sporadic conflicts might escalate, but both sides have been restrained and there are no signs that mainland China is using civilian vessels as militia vessels to “test the waters”, nor did Taiwan activate military vessels in response.

“It is unusual for so many dredgers to appear at the same time, and we need to be careful and prudent.” - Chen Yu-Jen, Matsu’s representative in the Legislative Yuan

Various media including Liberty Times, United Daily News, and Apple Daily reported that on 25 October, a Matsu resident uploaded a video clip on social media, claiming that over 100 dredgers from mainland China crossed into Taiwanese waters in the early morning hours to extract sand. That day was also “Retrocession Day” (光复节), marking the anniversary of the end of Japanese rule in Taiwan in 1945, and some Taiwanese netizens were worried about changes in the cross-strait situation, asking: “Are the Matsu islands being surrounded on Retrocession Day?”

Chen Yu-Jen, Matsu’s Kuomintang (KMT) representative in the Legislative Yuan, expressed concern that mainland China was requisitioning civilian vessels as militia vessels to loiter just outside Taiwanese waters to test the limits. “It is unusual for so many dredgers to appear at the same time, and we need to be careful and prudent,” she said.

A spokesperson for the Matsu maritime patrol team said that after the mainland China vessels were spotted on radar crossing into Taiwanese waters in the early morning, two patrol vessels were immediately deployed to the waters off Magang to Renai village in Nangan township, and dispersed one dredger and four sand carriers. However, the spokesperson stressed that most dredgers stayed outside the 6,000-metre limit, and the Matsu patrol team deployed the 2,000-tonne class CG-127 Xinbei patrol vessel to render support and maintain order.

Between the start of this year and 13 May, a total of 1,231 Chinese sand dredgers and dredging vessels were chased off, with the estimated illegal profits between them exceeding NT$6 billion (approximately S$285 million).

Taiwanese Premier Su Tseng-chang said yesterday that previously when mainland China dredgers crossed lines illegally, Taiwan would seize the vessels and take firm action — the dredgers would be auctioned off and the persons involved would be prosecuted, and so the people of Taiwan did not have to worry.

According to reported statistics, Taiwan’s Coast Guard Administration confiscated seven illegal Chinese sand dredgers that crossed the boundary limit into Taiwanese waters last year. Between the start of this year and 13 May, a total of 1,231 Chinese sand dredgers and dredging vessels were chased off, with the estimated illegal profits between them exceeding NT$6 billion (approximately S$285 million). Legislators have thus proposed to amend the law, hoping to deter illegal sand extraction by increasing penalties.

Kinmen and Matsu are symbolic connections to the mainland

Professor Liu Guoshen, executive director of Xiamen University’s Collaborative Innovation Center for Peaceful Development of Cross-Strait Relations, told Lianhe Zaobao that people on both sides of the Taiwan Strait share facets of work and life and there is no way to separate them. Mutual trust and understanding are required to jointly govern the people. Given the current distrust between both sides, he does not rule out the possibility of occasional conflicts escalating. But he declined to comment further on options the mainland has in attacking Taiwan or the prospect of future military conflicts.

After 1949, Taiwan military guarding Kinmen and the Matsu Islands engaged in a sea standoff with China’s People’s Liberation Army (PLA) stationed at the southeast coast of the mainland. Both parties opened fire in 1958. Later, the PLA continued to bomb the Kinmen and the Matsu areas on odd-numbered days and rested on even-numbered days. The battle finally came to an end in 1979.

Emeritus Professor Arthur S. Ding from the National Chengchi University told Lianhe Zaobao that both sides of the Taiwan Strait have been very restrained when handling the sand dredgers incident. They considered it a commercial incident and dealt with it in accordance with the law. Until now, the mainland has not escalated it to the political and military level, and neither did Taiwan “respond with warships”. The latter only cautiously dispatched its coast guards in charge of managing maritime security to deal with the situation.

Professor Ding does not think that the mainland authorities intend to capture Matsu or Kinmen at this stage because doing so would be tantamount to cutting Taiwan away from mainland China, thus forming a concrete “one China and one Taiwan” on opposing sides.

Emeritus Professor Ding pointed out that based on the current administrative system, Kinmen and Matsu are under the jurisdiction of the “Fujian Provincial Government of the Republic of China” and are the symbolic connections between the Taiwan-Penghu-Kinmen-Matsu region and the mainland. In 1994, then-Democratic Progressive Party Chairman Shih Ming-teh’s suggestion to the Kuomintang government to withdraw Taiwanese troops from the Kinmen and Matsu garrisons drew much controversy in Taiwan.

Thus, Professor Ding does not think that the mainland authorities intend to capture Matsu or Kinmen at this stage because doing so would be tantamount to cutting Taiwan away from mainland China, thus forming a concrete “one China and one Taiwan” on opposing sides.