The PLA must guard against the US trying to keep it busy by creating several battlegrounds at the same time, says military affairs commentator Song Zhongping. To be best prepared, the PLA should view the threats from the Taiwan Strait and South China Sea in toto and plan accordingly. This will help them to have more options at their disposal and to de-escalate conflicts as they arise. 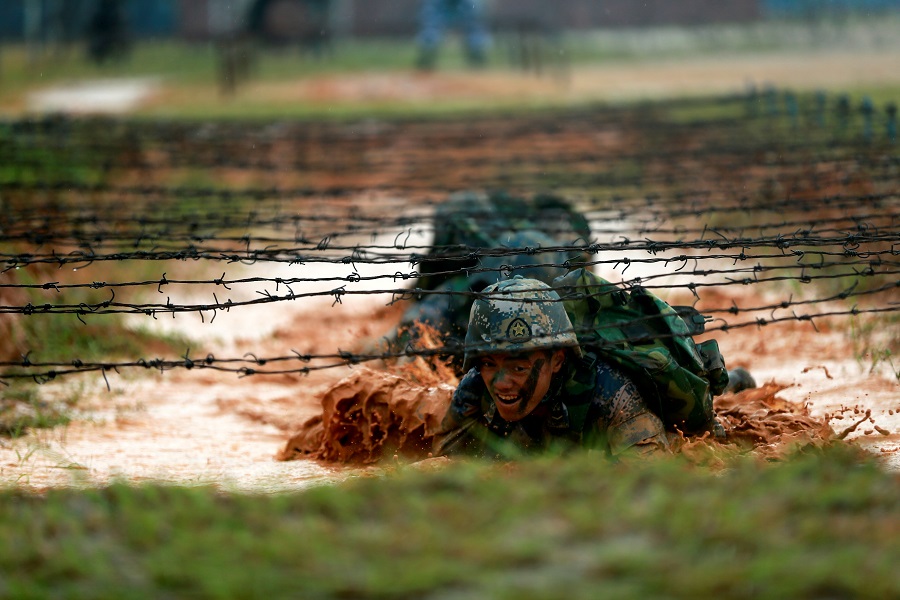 Grace Chong - 13 May 2022
Despite the decline in daily new Covid-19 cases over the past week, Shanghai has seen stricter anti-epidemic controls implemented to the point of absurdity. Zaobao correspondent Yang Danxu highlights the stranger-than-fiction happenings in Shanghai that have sparked public outrage and shaken people’s confidence in China’s zero-Covid policy.
Read more
Translated by Grace Chong on 2 September 2020

Recently, the People’s Liberation Army (PLA) has been conducting frequent large-scale military exercises in the Taiwan Strait, East China Sea, South China Sea, Yellow Sea, and Bohai Sea. A crucial reason for carrying out simultaneous exercises across different territorial waters is because future military conflicts may not occur in isolation, nor be confined to standalone or regional incidents. Unknown variables abound. Hence, the PLA’s emphasis on using a multifaceted “system-of-systems” approach, that has actual combat characteristics and involves various military branches, is a realistic option.

Solving the Taiwan issue is not an isolated political and military issue.

External forces led by the US are certain to play multiple cards — Taiwan Strait, South China Sea, East China Sea, Yellow Sea, and even Bohai Sea — at the same time. Solving the Taiwan issue is not an isolated political and military issue. The Bohai Sea, for that matter, must be protected at all costs as it concerns the safety of Beijing, Tianjin, and Hebei, otherwise known as the capital economic circle.

American radicals led by the Trump administration are constantly attacking China, especially as domestic Covid-19 cases in the US have not been brought under control and US President Donald Trump is repeatedly pushing the blame to China to better his chances of a successful re-election. Trump has even threatened to “cut off the whole relationship” with China.

This trend will continue to go on a downward spiral as the US presidential election heats up. However, no matter who becomes the US’s new president, it is par for the course in the US for China to be used as America’s biggest bogeyman. As this may help in garnering votes at the polls, it has become a norm to discredit China and it is seen as politically correct to play the China card as a show of “America First”. Hence, an increasing number of bills have been unanimously passed in the US Congress to sanction and restrict the mainland Chinese government. But the easiest way is to play the Taiwan card and the South China Sea card.

Before problems with the sovereignty of Taiwan and the South China Sea get resolved, there can be no Chinese national rejuvenation

The US government knows that Taiwan and the South China Sea are the core and vital interests of mainland China, and have intentionally and constantly stirred up trouble in these regions. If Taiwan’s Democratic Progressive Party (DPP) calls for a “de jure independence of Taiwan” with the US’s support, or openly declares “independence”, the PLA would take swift countermeasures and the US military would intervene in Taiwan Strait affairs and even gather its allies to get involved as well.

US hoping to burn PLA candle at both ends

At the same time, the US military would simultaneously increase its provocation in the South China Sea, East China Sea, Yellow Sea, and other regions to instigate parties involved in the South China Sea as well as Australia to fight against the PLA. In this way, two or more battlegrounds would be created, burning the PLA candle at both ends and limiting the effectiveness of troops deployed to solve the Taiwan issue. The PLA needs to carefully guard against such military tactics of the US. Strengthening the PLA’s military exercises and multi-battlefield response capabilities are ways to deal with these potential crises.

On the issue of safeguarding national sovereignty and territorial integrity, the different territorial waters and the Taiwan issue are to be treated as a whole and cannot be split apart. In the same vein, before problems with the sovereignty of Taiwan and the South China Sea get resolved, there can be no Chinese national rejuvenation — there is no room for negotiation.

To solve the Taiwan issue, one must adopt a unified stance, a military-focused plan, a multifaceted and extensive strategy, and achieve its goals by taking staggered steps, while being prepared for all possible outcomes.

The US is increasingly fearful of China and especially worried that China would replace it, despite China’s guarantee that it would not seek hegemony even if becomes powerful, much less challenge the US’s global hegemony. However, having a “Thucydides Trap” (spectre of war arising from the threat posed by a rising power to a ruling power) and “McCarthyism” (vilification of those with a pro-Communist stance) Cold War mentality, the US will never tolerate China’s peaceful rise and will suppress this strong opponent in all aspects. Thus, battle lines in the areas of politics, economy, technology, ideology, and particularly in those of China’s sovereignty and territorial integrity, have been drawn.

China needs to look a the overall picture and plan accordingly

As the US wants to stop China from achieving national reunification, the South China Sea islands and Taiwan’s sovereignty — being the core issues of China’s national reunification — are issues that the US will not let go of. Thus, the Chinese government must consider these two issues as a whole. Even if they cannot be resolved peacefully, military solutions must be simultaneously considered as well.

The South China Sea and Taiwan issues are difficult to solve — otherwise, they would have been resolved long ago. Undeniably, the longer the problems drag on, the tougher it becomes to solve them. To solve the Taiwan issue, one must adopt a unified stance, a military-focused plan, a multifaceted and extensive strategy, and achieve its goals by taking staggered steps, while being prepared for all possible outcomes.

China must not have wild ideas about the US military’s prowess. It must have the courage and determination to fight and win.

Adopting a unified stance means considering the two issues as a whole and being on guard for the worst-case scenario. Once a war breaks out or there exists two or more battlegrounds, the PLA must be prepared for full military combat against its strong opponents. These would not be confined to separatist forces in Taiwan and small states in the South China Sea or the East China Sea. The more prepared the PLA is, the more solutions it has at hand. It would be able to control more factors on the battleground, thus lowering the magnitude of the conflict. The best scenario is one in which enemy forces are subdued without the need to engage in a major military confrontation.

A military-focused plan is the ability to keep the peace with strong military might as its shield. Closing in on the enemy’s fort can also be a peaceful approach, but it must be supported by an overwhelmingly huge military advantage. While the PLA lags behind the US military considerably, waging war in China’s offshore waters still gives the PLA a regional geographical advantage. Besides, since the Korean War, the US military has never fought in another direct combat with a truly powerful opponent. While it has fought in many regional conflicts, these were against weak opponents which made the US military seem stronger than they were in reality. Thus, China must not have wild ideas about the US military’s prowess. It must have the courage and determination to fight and win.

Having a multifaceted and extensive strategy means treating Taiwan and the South China Sea as a single battleground whilst simultaneously paying attention to the whole country using the grid approach. The enemy must never be underestimated and troops must be carefully deployed to safeguard every inch of territory.

Tactically, taking staggered steps means fighting for each island one at a time. The issues surrounding Taiping Island, Zhongzhou Reef, and Pratas Islands must be tackled first, followed by the Pescadores Islands, and finally, Taiwan. One's efforts should match the magnitude of its aim to achieve national reunification at the least price.

Being prepared to face all possible outcomes refers to being prepared for both the best- and worst-case scenarios. If the US intervenes and engages in a full-blown war against China to the extent of using nuclear weapons, China will pay a high price — this is the worst-case scenario. While this is unlikely, China must still be mentally prepared and have ample resources to handle it. Even if the best-case scenario happens, the US will still corral the international community to impose sanctions on China, just like it did to Russia over the annexation of the Crimean peninsula. China has to be prepared for that as well.