Chiang Hsun marvels at the way a chive sauce made with Taiwan-grown produce brings out the flavours of a street stall scallion pancake so well. No question about it — this dish would win hands down against any Michelin-starred restaurant’s version. When will we learn to appreciate the natural and the down-to-earth, and eschew the shiny bright lights of the material and the shallow? 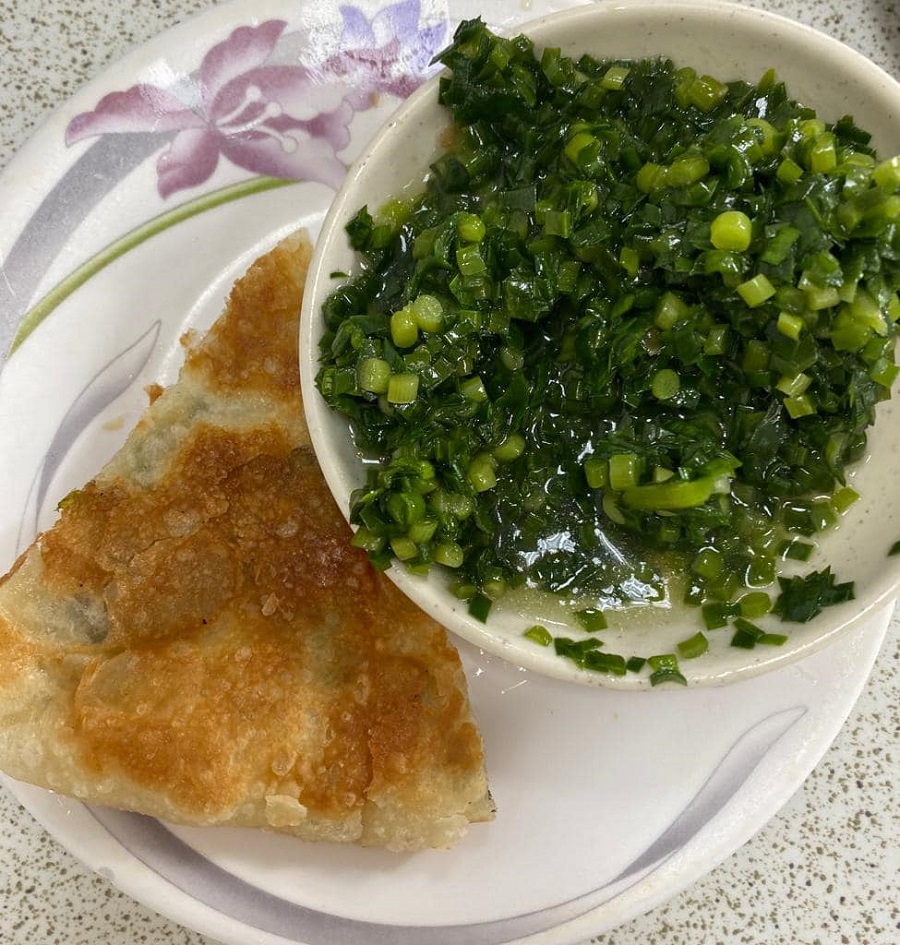 A humble plate of scallion pancake with chive sauce. (Facebook/蔣勳)

Grace Chong - 30 January 2023
Amid ongoing tensions, a high-level visit by US Secretary of State Antony Blinken to China in the coming week shows hope for improved relations between the two economic powerhouses. Zaobao correspondent Yu Zeyuan notes that while the meeting may not produce practical results, it is a much needed exchange to manage and control China-US relations from worsening.
Read more
Translated by Grace Chong on 9 November 2020

Walk through the streets and alleys of Taiwan, and you’d be dazzled by the hidden gems of cultural heritage in every nook and cranny. In fact, many of the street eats here are tastier than the dishes in two- or even three-Michelin-starred restaurants.

The fluffy pancakes are cut into four equal pieces and sold for NT$30 (S$1.40). But the best part of the dish is the chive sauce that comes with the pancakes free of charge. It is made with slender chives that are delicately diced and possibly finished with a dash of salt. This simple sauce goes amazingly well with the scallion pancakes and a taste of it would keep you coming back for more.

I am always surprised by how good the combination is each time I have this dish, and I wonder just how much effort and thought went into matching the two elements. The stall is packed with customers and the family of three who runs the stall is always busy. When they finally have a spare moment, they show their customers how to evenly spread the chive sauce over the pancake so that they can best enjoy the dish in one luscious bite.

Impatient and clueless customers would often scoot off after gobbling up the pancake, leaving the chive sauce untouched. It’s really their loss, because they are missing out on the chance to savour this exquisite taste.

One day, I arrived at the stall pretty late when the crowd had thinned. Seeing that the stall owner was free, I asked, “Why is the chive sauce so tasty?”

He smiled, knowing that he was speaking to someone who appreciates his dish. He said, “There’s no secret to it. Just that you must choose chives grown on this land.”

And then I suddenly realised: the spicy chives dish I had as a kid was made with the fresh chives grown in my mother’s backyard. When did the thin-stalked chives “become upgraded” to broad-stalked chives? Yes, they may be long and plump, but they have also lost their fragrance.

... I often ask myself: “Why must humans inject growth enhancers into plants and animals to modify their genes?” To put it bluntly, is it just to make fast money?

Why spend so much time and effort picking the right chives when the sauce is free of charge? Why take it so seriously when there isn’t profit to be earned? Perhaps the commercial brains of the city — the rich, extravagant, image-conscious and the business-minded — will never understand this logic.

Because US pork containing ractopamine (a growth-enhancing drug added to animal feed that can have adverse effects on human health) is landing in Taiwan soon, I often ask myself: “Why must humans inject growth enhancers into plants and animals to modify their genes?” To put it bluntly, is it just to make fast money?

Because of a vicious market economy, people are earning money that should not be earned, thus destroying nature and also people’s health, and on top of that, losing the ability to appreciate the truly good things in life — and for what?

Fortunately, a reassuringly humble essence of life still exists in a remote corner of this island. But abetted by political winds, the city’s worsening culture of extravagance and the imbibing of false values are crashing in like a tsunami. Looking at this chive sauce made with produce native to Taiwan, I can’t help but wonder, how long can such quiet and beautiful everyday life resist the waves?

Related: Above Michelin: These professors would rather have Hakka pork belly with preserved mustard | Remembering a mother’s beautiful smile and Suzhou's ‘Sixth Moon yellow’ crabs | Taiwan’s nostalgic flavours, the glitterati and the kamikaze | Beijing’s instant-boiled mutton and sweet memories of childhood days in Taiwan | Art and history in a bowl of Suzhou noodles