Given Taiwan’s energy needs, the debate over nuclear energy is being revived, with discussions over whether the construction of the Fourth Nuclear Power Plant in New Taipei City should be resumed. The ruling party DPP is advocating for a “No” vote and the KMT vice versa. But concerns of nuclear safety overshadow the debate and the referendum on 18 Dec, which will be one among four to be held on different issues. The outcome will be telling of the public’s political leanings and prospects for the future of Taiwan’s energy policies. 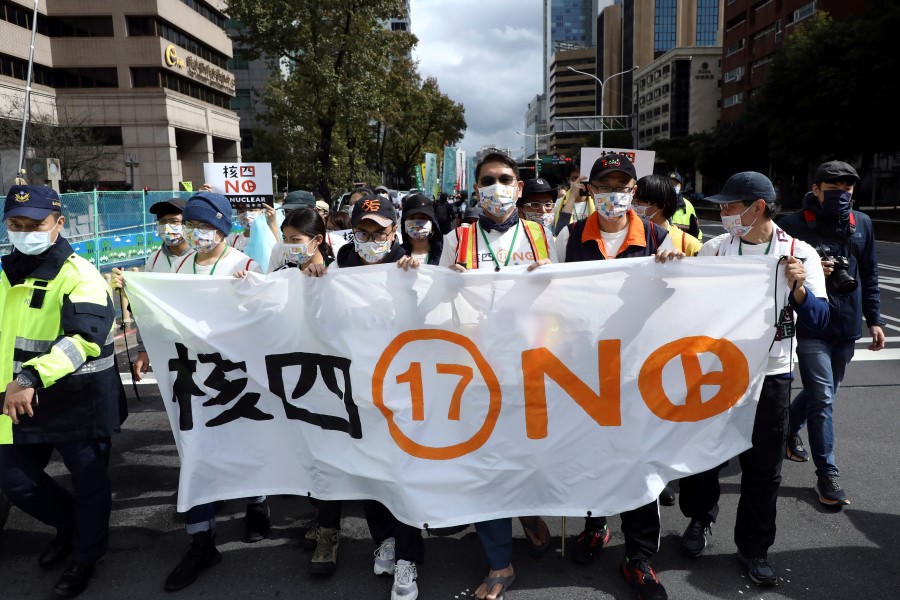 Demonstrators take part in a march against nuclear power ahead of a referendum on whether the government should continue building the stalled Fourth Nuclear Power Plant, in Taipei, Taiwan, 5 December 2021. (Annabelle Chih/Reuters)

Candice Chan - 29 June 2022
Over the past couple of years, there has been an influx of migrants from Hong Kong to the UK. Communities have been forming in various cities, such as London and Manchester. And as Hong Kongers find jobs and settle in, the British way of life rubs off on them. But underneath all that, they remain Hong Kongers at heart.
Read more
Translated by Candice Chan on 17 December 2021

Amid the natural beauty of the Lungmen area in the Gongliao District of New Taipei City rises Taiwan’s Fourth Nuclear Power Plant (FNPP), the focus of controversy over the past 41 years.

This long debate reaches back to 1980, when the location of the nuclear plant was selected. In 1992, the Legislative Yuan passed the budget and planning and construction began; in 1994, 96% of Gongliao residents objected in a public vote; and it was only in 1999 that construction officially began. In 2000, during Chen Shui-bian’s presidency, the work stopped and then resumed; safety tests were completed in 2014; and that same year, President Ma Ying-jeou announced that the plant would be closed and a referendum would be called to decide its fate.

Tsai Ing-wen of the Democratic Progressive Party (DPP)  — who became president in 2016 — announced a “nuclear-free homeland” (非核家园) energy policy, and that the FNPP would not be revived. However, the major blackout of 15 August 2017 changed people’s minds, and in 2018 the “go green with nuclear” (以核养绿) referendum was passed with a 59% majority.

However, so far the Taiwan government has not pushed nuclear energy and has been accused of forfeiting the referendum. The pro-nuclear camp is pushing to reinitiate the referendum on the FNPP to decide whether to let the plant go into commercial operation.

Going into summer in May this year, Taiwan experienced two major blackouts that impacted people’s energy use and the long-term energy supply for the semiconductor industry. At the time, a survey showed that young people went from overwhelming opposition to nuclear energy, to being quite evenly split.

Surveys held from late October to mid-November during the initial tussle over the referendum showed that slightly more people were in favour of restarting the FNPP, but following the DPP government’s strong anti-nuclear publicity, the tide has turned and out of six surveys conducted after mid-November, five surveys showed more objections.

The face-off between the Kuomintang (KMT) blue camp and the DPP green camp has also intensified. On 8 December, DPP chairman Tsai called on “Team Taiwan” to step up, urging each party member to pull four votes for the “four points of disagreement”: nuclear power, pork imports, conservation of algal reefs and whether future referendums should be held on the same day as major elections, meaning that those who object to current policies are not on Team Taiwan. KMT chairman Eric Chu also called on the entire population to step up and teach the DPP a lesson. However, local KMT mayors and officials are not on the same page, while Chu’s inconsistent “boomerang-ing” is seen as the biggest flaw in the KMT’s efforts to restart the FNPP.

...proponents and opposers of the referendum motion have still given completely different assessments of the FNPP’s equipment safety issues, the time and cost needed to restart the plant, and whether the structure is earthquake-resistant.

The one who has sparked the most controversy is popular New Taipei City mayor Hou You-yi of the KMT, who has said his top consideration is how the people feel. His firm stand of “no nuclear safety, no Fourth Nuclear Power Plant” has drawn criticism and even calls for punishment within his party.

The international community is reevaluating the use of nuclear energy as it works towards reducing carbon emissions to fight global warming. But Taiwan society is still concerned about safety issues related to the FNPP, such as a lack of social consensus on nuclear waste disposal as pointed out by the economic affairs ministry, numerous items waiting to be reviewed in the plant’s trial run report, and a geological survey that has to be done if the plant is to be restarted due to its close proximity to earthquake fault lines. Higher-ups in the party and government have also claimed that the construction of the FNPP has been sloppy and akin to “assembling a vintage car”.

Following multiple televised forums, proponents and opposers of the referendum motion have still given completely different assessments of the FNPP’s equipment safety issues, the time and cost needed to restart the plant, and whether the structure is earthquake-resistant.

When I visited the FNPP which has been mothballed for seven years, I found that outsiders were strictly barred from entering the heavily guarded facility. 61-year-old Mr Yang who resides beside the plant told me that he has been living there since his childhood like many of the other residents there. He had heard from the workers at the plant that the construction quality of the plant was not good and that it was “infested with mice”. He thought that sealing up and decommissioning the plant would take up too much manpower and resources. He hoped that the referendum would solve the issue once and for all, so future generations could have a safer living environment.

Niu Tse-hsun, a commentator and professor at the Chinese Culture University’s advertising department, told Zaobao that the DPP is focusing its ammunition on opposing the resumption of the FNPP so as to garner opposition votes for the other referendums such as moving the LNG terminal away from the algal reef and coinciding future referendums with the general elections. On the other hand, the KMT’s position has wavered, with Chu going back to previous statements and concerns that if nuclear safety could not be guaranteed, there would be no FNPP.

Niu thinks that the KMT is “doing risk management and control” to prepare for a Plan B should the resumption of the FNPP not go according to plan and to reduce the strength of the blow.

He added that among the four referendums, “whoever [either the KMT or the DPP] wins three of them wins; if they win two each, it would be a tie; and if either side only wins one of them, it would be a miserable defeat.”

...the outcome of the referendum will have a certain effect on the relative position of the ruling and opposition parties, and have a profound impact on the direction of Taiwan’s energy policies.

He pointed out that even if the FNPP does not resume following the referendum, it may not be advantageous to the DPP because losing nuclear power would mean that the party would have to face public anger over increased air pollution as a result of burning coal. If the referendum is passed, the problem could also be solved in accordance with public opinion by using nuclear power as a temporary and transitional plan to plug the energy gap.

After this round of intense party debates, it seems that the outcome of the referendum will have a certain effect on the relative position of the ruling and opposition parties, and have a profound impact on the direction of Taiwan’s energy policies.

How long would it take for the construction of the FNPP to resume and how much would it cost?

When did construction commence and how much was invested in total?

Where are the four nuclear power plants, and how big are they?

Generally, nuclear fuel made of uranium is used to produce nuclear fission in the reactor to release a large amount of heat energy that produces steam, which is used to spin large turbines that generate electricity. According to statistics from the International Atomic Energy Agency, as of June 2021, there are a total of 443 operational nuclear power plants in 33 countries. Another 52 nuclear power plants are under construction.

Related: Taiwan’s algal reef referendum: A proxy for political battle? | Faced with a shortage of water, electricity and vaccines, can Taiwan still deliver the chips? | Fire hazards plague Taiwan's ageing buildings and their residents, but is anyone fixing the problem?